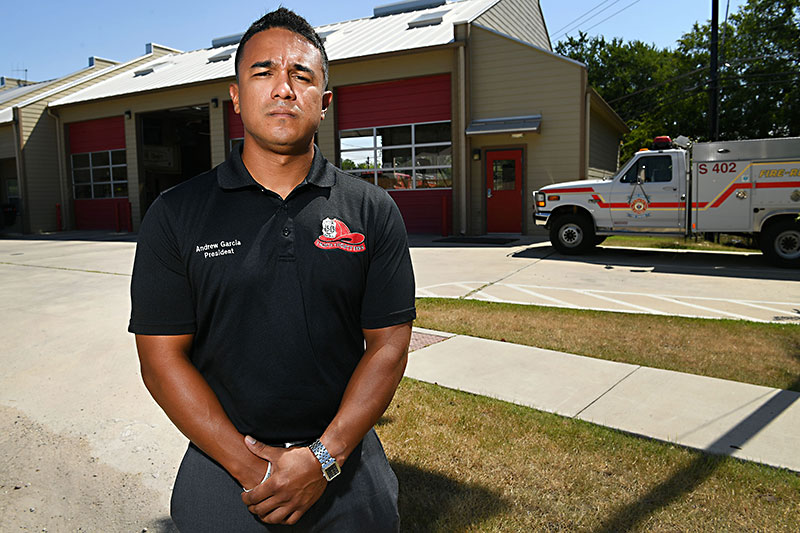 In the midst of a departmental merger process – the Austin Fire Department is scheduled to assume most operations of Emergency Services District 4, effective Oct. 1 – AFD brass has disqualified for candidacy firefighter Andrew (Drew) Garcia, who also happens to be the president of the ESD 4 firefighters' union, Local 4848. AFD Chief Rhoda Mae Kerr released a statement saying only that Garcia was disqualified for "valid reasons." Garcia and Austin Firefighters Association President Bob Nicks believe the disqualification is instead retaliation for Garcia's approach to the merger negotiations.

"I believe this is retribution," Nicks told the Chronicle last week, "for Drew's tough positions in merger negotiations."

There was a time when ESD 4 (one of 13 ESDs in Travis County) covered a large crescent around Central Austin from the Colorado River, out west, beyond State Highway 360, north up through Jollyville and Wells Branch, east and south again to the Colorado at Del Valle. No more; continuing annexation and expansion of the city limits has balkanized the ESD into five discrete islands, brokenly recalling the original map but now essentially impossible for the ESD firefighters to protect efficiently. Hence the recent agreement between the ESD and the city to merge operations, and transfer some of the facilities and the income from the district's property and sales taxes into AFD, in what is technically called a "contract of service" agreement, ratified by City Council on June 15.

In principle, the agreement – hammered out over two years by a stakeholders' group – also means that the current ESD firefighters (about 30 in all) have the right to become AFD firefighters, should they choose, pending their qualification under AFD standards and an abbreviated academy training, to complete the transfer by Oct. 1.

However, in a surprising decision, Garcia was notified July 5 by AFD Chief Kerr that he has been disqualified from AFD candidacy. Kerr's brief letter to Garcia informed him that he had been "determined not to be a suitable candidate" because he had (as noted from a checklist) "failed background investigation." Without further explanation, Kerr's letter continues, "This decision is final and not subject to appeal."

Garcia says he initially believed the disqualification was for a "failure to disclose" relevant personal history – because, when asked on a form if he had ever been "suspended" or subject to other discipline, he had neglected to note a 2008 suspension from his first cadet enrollment, after a classroom altercation with another cadet. "I should have put it down, but I was thinking that 'suspended' meant 'suspended on the job,'" Garcia said, "and I've never been suspended or disciplined on the job." Indeed, when someone from AFD's Professional Standards Office contacted him asking about the 2008 incident, Garcia apologized for the omission and gave his version of the episode – a brief scuffle following a misunderstanding by the other cadet that Garcia had insulted him. In a follow-up letter to the PSO, Garcia explained and apologized again, while adding that he had been readmitted to the next academy and "successfully graduated [as] valedictorian."

Although the PSO response was noncommittal about a resolution, Garcia and Nicks, his union colleague, increasingly believe that Garcia's disqualification has little to do with a brief dustup that happened nine years ago. Nicks told the Chronicle he believes AFD brass is carrying out "retribution for Garcia being a tough negotiator" during the merger talks, and Garcia agrees: "They found a reason to punch back at me."

Garcia points specifically to his opposition to a physical qualifying standard of a 1.5-mile/12-minute run – a standard imposed by AFD for its four most recent cadet academies. Kerr and her assistant chiefs had insisted on maintaining the running standard, even as the stakeholder group negotiating the merger had agreed instead on two different standards (a treadmill health test and a pack-laden 3-mile walk). Others were also skeptical about the running standard as potentially discriminatory – City Council Member (and former firefighter) Delia Garza told the chief, "I never ran an eight-minute mile in my life, and I hope I was considered a good firefighter."

Garcia believes that Kerr is retaliating not only for his opposition to the standard (which was eventually abandoned) but because he opposed it publicly to City Council, on Feb. 16. A day earlier, he said, Kerr had personally appeared before the merger stakeholders' group and told them (in Garcia's words), "We don't need other organizations running to Council and telling them different stories."

"I took that," said Garcia, "as a direct threat against our organization, trying to silence us."

Moreover, Nicks says that several times during the merger negotiations, he was approached by various AFD brass, asking him "Why is Garcia being so difficult?"

"I told them," he said, "that he's doing exactly what you would do in his position. He's doing his best to protect his members during the merger."

There is apparently no question that, since 2009, Garcia has had a good record as a firefighter. In a statement issued Monday by ESD 4 Chief David Bailey, the district said: "Travis County ESD 4 remains committed to the original hope that as many of our firefighters as possible become employees of the Austin Fire Department. For the past year, we have sought to prepare all of our firefighters for the multiple hiring steps required in the merger agreement and we continue to view our firefighters as highly qualified."

But his failure to check the "suspension" box is being considered evidence of dishonesty – even though AFD had access to his personnel records and Garcia was forthcoming (documented in emails) when they raised the question with him. When Nicks reminded them that the disqualification decision had to come from a labor/management board, AFD assembled the group by phone for a quick reiteration. "They were just ratifying what they'd already decided," said Nicks.

Asked to explain the decision, Chief Kerr released a brief statement reiterating AFD's "highest standards," adding that the department only accepts "the best of the best." Kerr said she could not discuss "personnel matters," but that "Mr. Garcia was treated no differently than any other candidate in any of our other hiring processes. ... Mr. Garcia was dismissed from our current process for valid reasons."

In response to additional Chronicle inquiries, Assistant Chief Aaron Woolverton (who oversees the hiring process) amplified AFD's initial response. He wrote that the background investigation of Garcia raised "issues" that required further investigation, and that "AFD contacted several additional sources, conducted multiple interviews, and at the end of the day, determined that this particular candidate's issue was one that was incompatible with the high standards of the Austin Fire Department."

Woolverton bluntly dismissed any "speculation" that the decision had anything to do with Garcia's union representation. "There was never any consideration given," he wrote, "for whether or not this particular candidate had any negotiating position – firm or otherwise – during the merger process." He called the suggestion a "feeble attempt" to discredit AFD's hiring process, which dismisses candidates for "similar egregious actions." (He did not specify what he meant by "egregious actions.")

Woolverton concluded, "If I wouldn't feel comfortable sending in a candidate to work on my wife or daughter, I certainly don't expect the citizens we serve to feel differently. They demand – and deserve – that we hire the best of the best, so that's what we do. Unfortunately for Mr. Garcia, he does not fit that criteria."

Garcia isn't buying it. "They disqualified me because I negotiated hard for my guys. I was a tough negotiator, and they don't want me in their department. I pushed for a fair and equitable process for my firefighters, coming over into the Austin Fire Department."

A version of this article appeared in print on July 14, 2017 with the headline: He Checked the Wrong Box