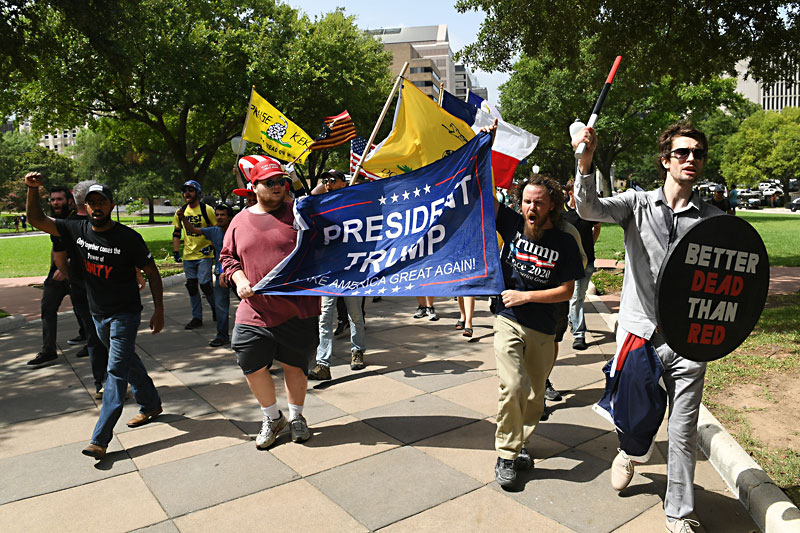 Several hundred convened at Wooldridge Square Park on Saturday for a rally and march to the Capitol in support of President Donald Trump. The 1776 Free­dom March, organized by Texans United for America, was promoted as an event to celebrate freedom, liberty, "American exceptionalism," and a return to the "Amer­ica first" ideal. The assemblage of self-styled patriots represented a cross section of Texan right-wing groups (Alt-Knights, Proud Boys, and Three Per­cent­ers) and notable right-wing celebrities like Joe "Rambo" Biggs, Augustus Invictus, and Kyle Chapman, aka "Based Stickman." The rally kicked off mid-morning with a pledge of allegiance and prayer invoking Trump as the group's "beloved leader," followed by speeches by Invictus and Chapman, calling for armed rebellion and disparaging multiculturalism, immigrants, and the political left. The crowd – whose costumed pageantry of baseball helmets, shin guards, tactical gear, and assault rifles resembled a menacing cosplay session – then took to the streets for a mile-long march down Guadalupe, over to Congress, then back up to the Capit­ol. Flying assorted variations of American, Texan, and Gadsden flags, the marchers chanted "Lock her up," "Death to Soros," and "Communism is treason" along the way. Despite concerns of potential confrontations with counter-protesters (progressive picnickers from the Austin Potluck group had worried publicly about a run-in), the march ended peacefully with several more speeches on the Capitol steps and a thinning and more subdued crowd returning to Wooldridge Square to arrange lunch at Terry Black's BBQ.

A version of this article appeared in print on July 7, 2017 with the headline: Freedom of ’76