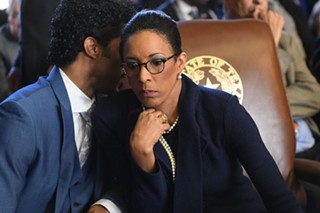 Rep. Dawnna Dukes, D-Pflugerville, made a rare public appearance on June 30: Before Judge Brad Urrutia's 450th District Court, she pleaded not guilty to 15 counts relating to abuse of office. In January, Dukes was indicted by a Travis County Grand Jury of ordering her staff to handle non-legislative related duties, including organizing the African American Community Heritage Festival and acting as nanny for her daughter. The state representative faces 13 counts of tampering with a governmental record (each a state felony punishable by two years in jail and a $10,000 fine) and two charges of abuse of official capacity (again state felonies, each punishable by a maximum sentence of one year in jail and $2,000 in fines).

After her indictment, Dukes had an appalling attendance record during the legislative session, missing a large number of votes and committee hearings. She turned up two hours late for her court hearing, claiming she only found out on the previous night that she needed to attend. Urrutia has given Dukes more than enough time to prepare for her next appearance; he set her trial date for Oct. 16.

Dukes' impending trial has not improved relations with her House District 46 Democratic precinct chairs, several of whom have already called for her resignation. They and several local groups have now arranged an HD 46 primary candidate forum for 2pm on Sunday, July 9, at ACC Eastview Campus, 3401 Webberville. Precinct 126 Chair Daniel Segura-Kelly said organizers invited Dukes via certified mail. "We are still unsure if she will be attending," he says, "but we do know she's not accepting mail from us."