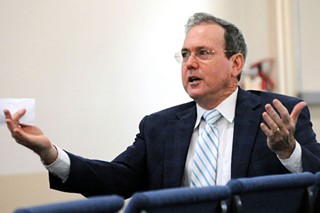 Gone but not quite forgotten. That would be one-term City Council Member Don Zimmerman, succeeded this year by Jimmy Flannigan, but in various venues still up to his predictable outrages over taxes, public education, affordable housing, health insurance – ­basically every public expenditure except suburban highways. Zimmerman was in the City Hall news this week, as the Austin Bulldog reported that an ethics complaint filed against him has been finally resolved – 28 months after the fact. On June 12, the Texas Ethics Commission entered into an "Assurance of Voluntary Compliance" agreement with Zimmerman addressing an ethics violation (on a complaint filed by Bulldog attorney Bill Aleshire) concerning his 2014 campaign. Zimmerman had paid $2,000 to his wife, Jennifer Winter Zimmerman, for campaign work, which violates state law, potentially a class A misdemeanor.

Having been alerted to the violation by the initial complaint, Zimmerman filed a follow-up campaign report, essentially converting the $2,000 to a partial "repayment" of his personal $20,000 loan to his own campaign – an arrangement now retroactively blessed by the Ethics Commission. Aleshire told the Bulldog, "He got away with a flagrant violation of campaign and ethics laws." Asked why the resolution took so long, Ethics Commission general counsel Ian Steusloff said, "Every complaint is different and some take longer than others."

With characteristic evasion, Zimmerman denounced the relevant campaign law as "marriage discrimination" ("If I had shacked up with Jennifer, then I could pay her while living in sin") and vowed to have it repealed. And considering the current national ethics standards established under the Trump administration – abolishing all distinctions between public good and family profit – paying a spouse two grand looks like small beer indeed.