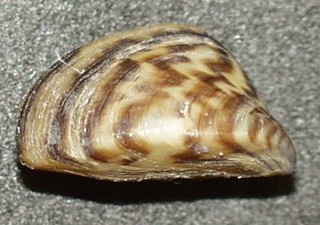 A typical shell for the insidious zebra mussel

Highly invasive zebra mussels, the kind of bivalves that devastate whatever aquatic ecosystem they can get a viscous foothold in, have been discovered in Lake Travis. Both adult and juvenile mussels have been found at two different sites around the lake, according to a new report from Texas Parks & Wildlife, which indicates an infestation with an established, reproducing population. These mussels, which breed faster than rabbits on Viagra and old Barry White LPs, can cover shoreline rocks and litter beaches with sharp shells, clog public-water intakes, and damage boats and motors left in infested waters – eventually wreaking serious environmental and economic damages throughout the affected area.

Since zebra mussels were first found in Texas in 2009, 11 lakes in five river basins have been infested, and now our own is among them. "A boat can take a ready-made colony to another lake at any time," said Monica McGarrity, team lead of TPWD's Aquatic Invasive Species unit, "so preventing the spread within these newly infested basins is still really important. The longer we can stave off new infestations the longer we can prevent potential recreational impacts or costly impacts to infrastructure."

Note: In Texas, it's unlawful to possess or transport zebra mussels, dead or alive. Boaters are required to drain all water from their boat and on-board receptacles before leaving or approaching a body of fresh water in order to prevent transfer of the goddamn things.

A version of this article appeared in print on June 30, 2017 with the headline: Mussel Beach 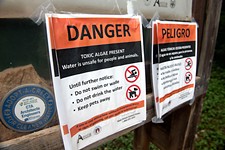