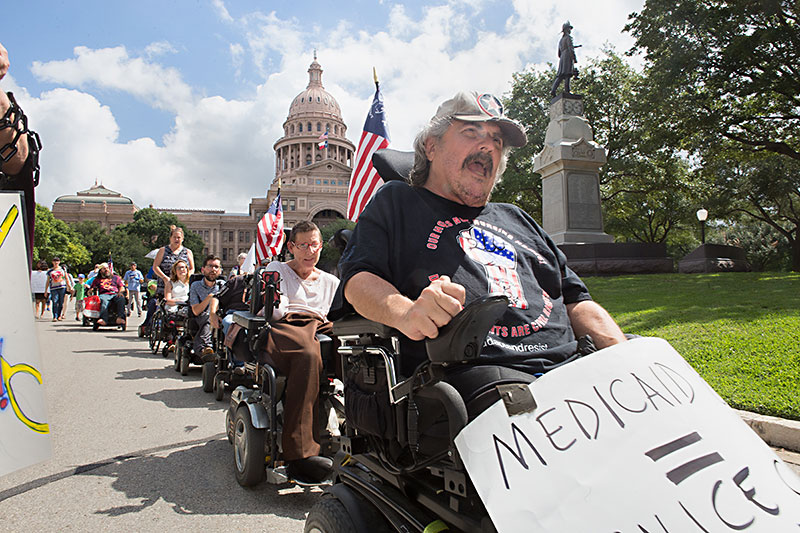 Demonstrators from disability rights organizations staged a die-in Wednesday outside the office of Majority Whip John Cornyn to protest the Better Care Reconciliation Act, the health care bill recently proposed by Republicans in the U.S. Senate. GOP leaders balked Tuesday on plans to vote on the widely condemned bill this week. The Texas delegation has been split since its public reveal last week. Junior Sen. Ted Cruz said he has "reservations" about the current draft, while Cornyn wanted to bring the measure to a quick vote. (Photo by Jana Birchum)

City Council marked the kickoff of its July break with one last CodeNEXT work session on Wed., June 28; the next regular meeting is Aug. 3, though the hiatus will be occupied by ongoing work on the land development code as well as the run-up to August budget deliberations. See "Public Notice," and "Council: All About the Code," June 30.

Mayor Steve Adler was elected to the board of trustees of the U.S. Conference of Mayors, joining the group's executive committee. New Orleans Mayor Mitch Landrieu became the UCSM's 75th president, telling his more than 250 colleagues, "We cannot simply resist and retreat – we must lead and engage." On immigration, education, health care, climate change, etc., the USCM has increasingly taken on the role of a counterforce to the Trump administration.

AISD's newest trustee, Geronimo Rod­riguez, was elected board vice president on June 26. Appointed to the board only last week, he replaces former VP Paul Saldaña, who resigned in April.

Professional anti-affirmative action litigant Edward Blum filed another lawsuit against UT-Austin Tuesday, representing "Students for Fair Admission" – i.e., white applicants denied their traditional expectation of entry into the state's flagship university. In a statement, the university administration defended its admissions policy as "narrowly tailored" for diversity and sustained by the U.S. Supreme Court.

Death Row inmate Robert Pruett, who unsuccessfully argued in court that he was framed for the 1999 murder of a Beeville prison guard, has received a new execution date: Oct. 12.

The U.S. Supreme Court agreed to let a limited version of President Trump's Muslim travel ban stand. The rule banning travel from six Muslim-majority counties can take effect but cannot be enforced "against foreign nationals who have a credible claim of a bona fide relationship with a person or entity" in the U.S. SCOTUS will hear arguments on the full ban this fall.

Chronicle offices are closed Monday and Tuesday, July 3-4, so we can smell that sweet freedom.