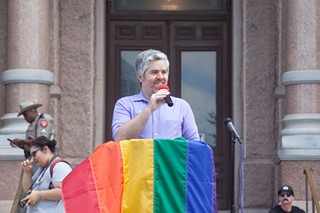 Austin's LGBTQ Quality of Life Advisory Commission held its first meeting on Tuesday evening, June 20. Council Member Jimmy Flannigan and Mayor Steve Adler introduced the commission, calling it a historic day for Austin – "even more historic," said Flannigan, that the commission was kicking off "in June, in Pride Month." Eleven of the 15 commissioners have been selected – one by each CM and the mayor. Those commissioners will select the final four members. Those selected by council members will serve four-year terms, concurrent with their appointer's term in office. The four others will serve two-year terms; 47 people have already applied for the vacant seats.

The commission's formation has been brewing since October, when Adler called for its creation during the Lesbian and Gay Peace Officers Association's Hate Crime Summit. After Flannigan won the District 6 seat in November, his first act in office was to pass a resolution to create the commission. He was adamant Tuesday that there is no predetermined agenda for commissioners. "The voices of cisgender, heteronormative, white men are heard all the time," he said. "I want to hear from you. You are community leaders."

Commissioners will likely meet monthly once initial housekeeping gets wrapped up. In addition to filling the final four seats, commissioners will need to elect a chair and co-chair, and adopt formal recommendations to the City Manager Search Advisory Task Force.

Paula Buls, a trans activist nominated to serve on the commission by CM Greg Casar, said she was looking forward to getting started. "Austin has always prided itself for its commitment to diversity, inclusion, and being a leader in progressive ideas and policies," she said. "Today we're seeing a state and federal government trying to undermine these policies. … But the spirit of Austin cannot be so easily quelled. The formation of this commission is one small, but vital measure that Austin takes to stand for those values."