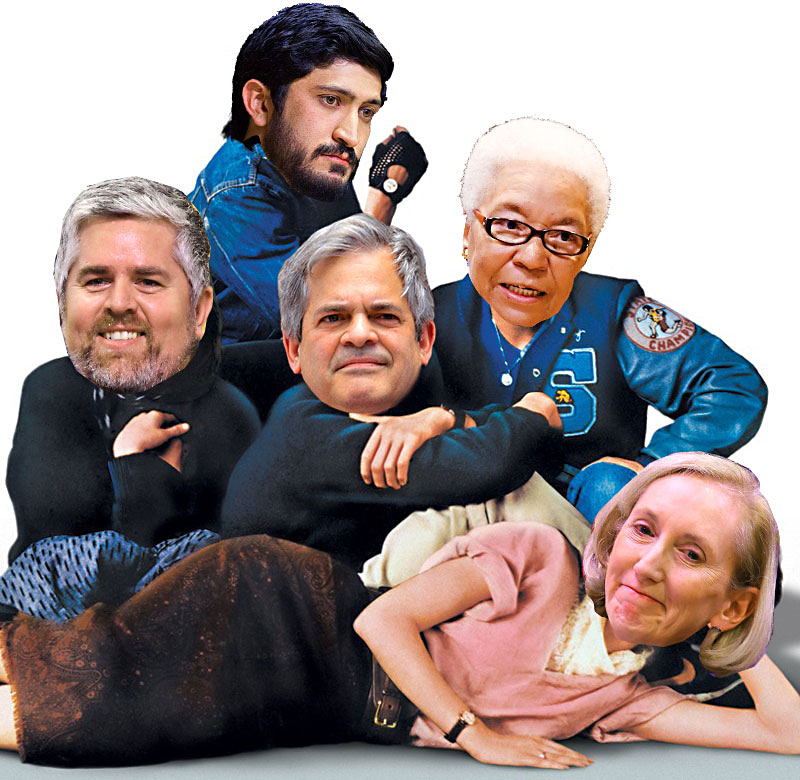 The Council Club (by the Chronicle Art Staff)

With two years and change under their belts, the 10-1 City Council is no longer a political novelty. Entering their last meeting before the July break – which will likely encompass informal progress on both budget preparation and CodeNEXT – today's meeting, June 22, carries a relatively light agenda (59 Items, more than half on consent), but there are a handful of matters that might raise a few sparks.

Several potential flash points are on the consent agenda, so it will depend somewhat on which Items members choose to pull for discussion or whether public witnesses want to comment. Items 2 and 3 reflect ongoing Austin Energy priorities: Item 2 would authorize negotiation to buy another 200 megawatts of wind energy, and Item 3 requests approval of the latest recommendations of the Electric Utility Commission's Resource Planning Working Group for AE's Resource Generation and Climate Protection Plan. The recommendations again advance renewable energy goals for the utility, but some task force members added comments that the renewable targets are still too weak, and are pressing for stronger action – that may well get aired out from the lecterns.

The alliances are approx­imate, fluid, and shifting – but the lines tend to harden on the difficult question of land use.

Returning from earlier meetings are a trio of postponements: 1) creation of a Char­ter Review Commission aimed at Nov­em­ber 2018 (Item 40) with a fairly general assignment, to include campaign finance matters and a few other things; 2) another pilot version of Parks & Rec's "card entry system" (Item 36) intended as a more accurate usage record, but rendered inadvertently controversial because of immigration enforcement concerns; 3) A couple of Items (23 and 24) confirming by ordinance the bans on e-cigarettes, and incidentally confirming the rebranding of the Health and Human Services Department as "Public Health."

All of the above might draw some debate, but Item 43 – a proposal to add additional drafts and review to the CodeNEXT timeline – appears to be a culmination of ongoing anxiety (official and public) about the progress of the revised version of the land use code. Sponsored by CM Alison Alter (with four co-sponsors: Mayor Steve Adler, Mayor Pro Tem Kathie Tovo, CMs Ann Kitchen and Leslie Pool), the brief resolution appears to be an indirect concession that the revision process is in danger of running off the rails. Under its terms, yet another code draft will be generated, all drafts will move through the Planning Commission and the Zoning and Platting Commission, and any Commission revisions will be incorporated into whatever draft eventually reaches Council – and the current timelines (targeting spring of 2018) will be revised to accommodate additional drafts and review.

CMs Ora Houston and Ellen Troxclair form yet another inconsistent alliance – the "traditionalists"? – who are suspicious of new programs and like to grill department heads over what they consider unnecessary spending (e.g., virtually anything on art or artists), and record nay votes and abstentions on consent matters certain to pass anyway. (Following the departure of firebrand Don Zimmerman, Troxclair has become the default ideological conservative, although she's much more civil to both her colleagues and city staff.) They're unpredictable on land use – Houston generally votes with the neighborhood protectionists, Troxclair's more likely to support additional supply as long as it doesn't directly affect her Southwest district.

The apparent alliances are approximate, fluid, and shifting – but the lines tend to harden on the difficult question of land use, where generalized support for "affordable housing" as a principle does not necessarily translate to "more housing supply." Over the next year, as we continue to march through CodeNEXT, it will be interesting to see how these lines on the dais shift, re-form, and occasionally break.

• Impeach-O-Rama: Each CM budget has a certain set-aside for "fee waivers" on nonprofit events, and most requests are routinely approved by the dais. That might not be the case for Item 38, sponsored by CM Renteria, which would approve $850 in waivers for a July 2 "Impeachment March Austin" sponsored by Austin state Rep. Donna Howard. Expect at least rhetorical backlash from CM Troxclair.

• Can We Talk? Item 14 proposes an inter­local agreement with the state over Phase One of the Master Plan to redo and update the Capitol Complex, which requires city cooperation. Expect some raised eyebrows over the request – still likely to be approved – in the wake of the Legislature and Gov. Greg Abbott's recent disdain for city initiatives in general and for Austin in particular.

• Oh, Go Ahead and Trim: Items 30 and 31 concern large service contracts – for organic composting and tree-trimming, respectively – that were postponed earlier for various technical issues and complaints from potential competitors. We'll learn if the kinks have been straightened.

Proclamations will honor the late Boyd Vance, ABIA's Food Rescue Program, Water Conservation, and Public Service exemplars from the city departments. The musical honorees are Bidi Bidi Banda, who will perform one of their legendary tributes to Selena: honoree of the honorees. Viva!