"A virtual power plant in any building." 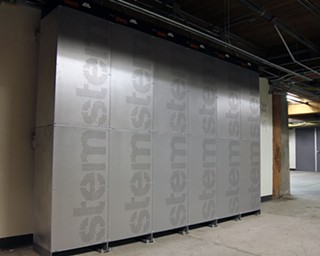 One of Stem's energy storage systems

If Austin's to truly establish itself as a city independent of fossil fuels, its conversion to renewable energy will prove only half the battle. The other end is distribution – and in May, Austin Energy, the city's energy utility, took an important step toward realizing that objective when it announced a new partnership with intelligent energy storage service provider Stem.

In addition to a target goal of 35% renewable energy resources by 2020, the city's Climate Protection Plan also establishes a path toward cutting 800 megawatts off our peak demand by that same date. To accomplish both objectives, Austin Energy must surmount the historic challenges associated with scaling renewable energy, according to Zach Baumer, the city's climate program manager. "The two key challenges are intermittency – the fact that the sun goes down and that the wind doesn't blow all the time – and the fact that you can't ramp it up quickly," said Baumer. "A lot of the economics come down to saving on peaks." Unlike fossil fuel plants that can be fed more fuel to meet peak demands, renewable energy sources require sophisticated batteries and advanced software to respond in time.

“all progressive utilities are moving toward a future where [energy production] is a two-way street.” – Robert Cullick

Stem, a San Francisco-based company, is what Austin Energy hopes can speed up that response time. The company's batteries collect unused solar energy during the day, to be used when its management software detects an energy spike. It's part of the city's SHINES program (Sustainable and Holistic Integration of Energy Storage and Solar Photovoltaics), which is funded through a grant from the Department of Energy. Austin will be Stem's eighth utility contract (its first was Hawaii Electric, only a year ago). CEO John Carrington said he believes his company's technology will move the SHINES program closer to its goal of reducing the cost of solar-based electricity to below $.14/kWh. "We can effectively, within seconds, activate our system and aggregate massive amounts of energy," he said. "The Stem storage system becomes a virtual power plant in any building."

Although the technology is somewhat of a novelty, AE spokesperson Robert Cullick said the utility is willing to explore its value because transitioning to any renewable energy model will require innovation. "It's something we haven't done before, but it's being tested in a variety of ways across the United States," he said. "As a community-owned utility, the most important thing for Austin Energy is to collaborate with our customers."

Unlike a traditional fossil fuel-based energy system wherein nearly all of the energy comes from the utility, a renewable energy system will involve less centralized production and more residents and businesses supplying power to the grid. "All progressive utilities are moving toward a future where [energy production] is a two-way street," said Cullick. "The way we're looking at it is that some of our customers have power generation capacity [through solar panels], so what can we add to the mix? Well, we can add batteries, a grid, and substations. Our goal is to figure out as we move from one model to another model: How do we increase value for our customers?"

If AE's initial partnership with Stem proves successful, the potential for batteries to be installed at residences could increase. (Though not through Stem, which only works with commercial entities.) Such an expansion would involve risk, but it's a risk Baumer said is worth taking. "In order to reach [the city's energy] goals, we have to be on the cutting edge," he said.

For information about how to get your business equipped with Stem, email Austin Energy SHINES: austinshines@austinenergy.com. This story has been updated to clarify that Stem has no current intentions to work with residential clients.

Behind the Buzzwords: Diving Deeper at SXSW EDU
Panels that highlight challenges and strategies shaping the Mendez turnaround plan