AISD: Propositions for a Full Board 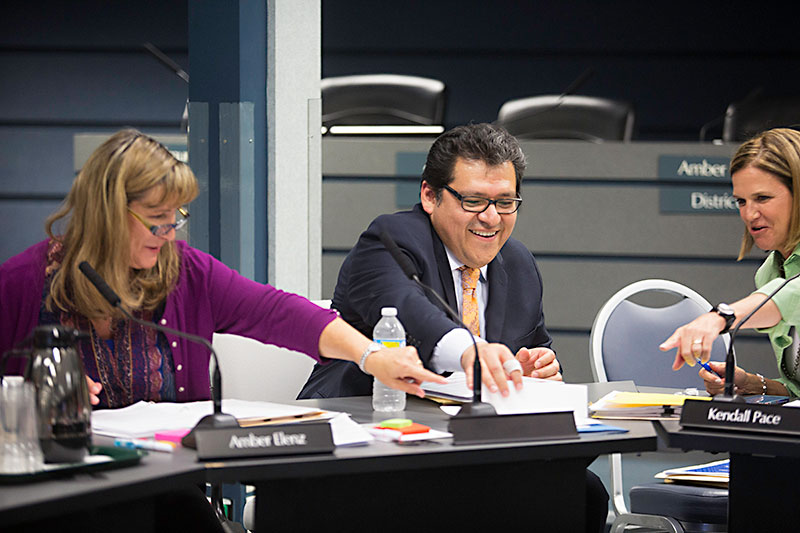 The Austin Independent School District took two major steps toward defining its future direction on Monday night, June 12 – first appointing a new trustee, and then starting final discussions on the shape, size, and scope of a big-time bond proposal.

There had been an empty seat on the board of trustees' dais since April, when District 6 Trustee Paul Saldaña stepped down, citing in part the extraordinary time demands of the unpaid board position. The board decided to appoint a replacement to complete his unexpired term, rather than calling a special election, and received three applications: Foundation Communities' St. Elmo Neighborhood Project director and former IDEA charter school principal Alejan­dro Delgado, Seton Healthcare Fam­ily Chief Advocacy Officer and former Greater Austin Hispanic Chamber of Com­merce president Geronimo Rodriguez, and PTA volunteer and computer specialist Glen Shield. Shield was always seen as an also-ran, due to comparative inexperience and the clear preference of the board to appoint a Hispanic replacement for its sole Hispanic representative. Delgado had a major strike against him due to his IDEA career, while Rodriguez seemed in good standing thanks to a nonendorsement type of endorsement from Saldaña ("AISD: Refilling the School Board," May 19).

Even so, in the final days before the board's Monday vote, Delgado seemed the front-runner. Rodriguez's supporters spent the weekend sending letters and signing petitions, and ultimately, the board sided with Rodriguez in a unanimous vote of support. (Though the vote may not have represented the full opinions of trustees: District 7 Trustee Yasmin Wagner made sure to praise each candidate, and District 3's Ann Teich encouraged both Delgado and Shield to run again when the seat comes up for election next November.)

With Rodriguez now filling out the roster, the board turned to discussing a bond package for the November election – its first bond proposal since 2013, when voters rejected half of the propositions, leaving the district even deeper in a construction hole. This year's bond discussion boils down to two figures: First, the $4.6 billion in required repairs and growth, as laid out in the district's 25-year facility master plan (FMP); and second, the $1 billion left in the district's bonding capacity. Go above that, and AISD would have to raise its property tax rate to cover the cost.

According to Superintendent Paul Cruz, the 25-year FMP is a full overhaul of AISD sites. That'll require a degree of prioritization in this bond cycle. For example, Cruz said he wanted to avoid "a situation like another T.A. Brown" – referring to the north-central elementary that closed after it became structurally unsound. The original FMP laid out a long-term vision that the district's Facility and Bond Planning Advis­ory Committee updated and prioritized using three metrics: the facility condi­tion assessment (a scoring of how well- or ill-repaired a building is); overcrowding; and what Cruz called WSD – "warm, safe, and dry." In its recommendations, delivered to the board last month, the FABPAC prioritized $1.4 billion in investments over the next six years. The administration then took that $1.4 billion list and broke it into groups that it dubbed essentials. It recommended that the board only bring essentials group 1, totaling $989 million, to a vote this year – just shy of the critical $1 billion tax rate-raising point.

The biggest single-ticket item will be a $187 million earmark for critical facility deficiencies, which would be the first real bite into the massive deferred maintenance bills the district has built up due to lack of finance. Essentials group 1 targets 14 campuses in particular, starting with replacing the buildings at Brown, Casis, Govalle, and Men­chaca elementaries, plus building a new southwest elementary school and a middle school in West Austin, plus upgrades, renovations, and additions at Rosedale Special Educa­tion School and Austin and Bowie high schools, and either a new elementary or on-site expansion to ease overcrowding at Doss Ele­men­tary. In keeping with the district's plan to improve and smooth student progress as they move up, the proposal also calls for coherent reinvention and modernization at the Eastside Memorial, LBJ, and McCallum vertical teams.

However, an essentials group 1 logically leads to an essentials group 2. Cruz and staff painted this as still essential and desirable, but not as pressing in need, and not a priority for this November. Totaling $407 million, this list includes structural investments like a new central food service production facility, and more controversial proposals like $22 million to revamp the Alternative Learning Center (located at the politically sensitive home of the original Anderson, Austin's first African-American high school) and $125 million to build a dedicated campus for the Liberal Arts and Science Academy.

The board quickly settled on a simple goal: one sub-billion bond, with no resultant tax rate increase. But as board presi­dent Kendall Pace wondered, "Now the question is, how do we fill that jar up?" The night then blurred out past midnight into inconclusive horse trading.

The major shift was a late proposal to play musical chairs in East Austin, a multi-part proposal to relocate Eastside to the old Anderson, then move LASA to the location of the current Eastside (which was, until 2008, Johnston High). The proposal prompted concern from Teich, worried this major plan had seemingly come out of the blue. Meanwhile, while every board member seemed eager to shift proposals from group 2 to group 1, there were fewer offers of projects to be killed to keep the bond below $1 billion. By contrast, District 1 Trustee Ted Gordon called to cut the bond to essential investments only – including, not surprisingly, projects like a northeast elementary and $12 million to shore up the crumbling ALC, both intended to help his district.

The board scattered without any final decisions, and planned to reconvene at another work session, scheduled just as the Chronicle was going to press on Wednesday. The current schedule demands they reach a final decision at the Monday, June 19 board meeting, to be able to start campaigning for the November ballot.