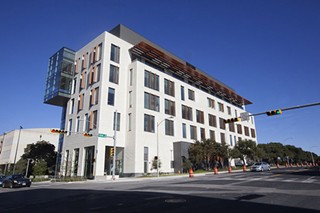 Austin lawyer Fred Lewis has resumed his war of words with UT-Austin's Dell Medical School, accusing the school of withholding public information. UT's attorneys have requested an opinion from the state attorney general on whether they can withhold certain documents that Lewis has requested, in his ongoing campaign to determine whether the Medical School is legally spending annual funding it receives from Cen­tral Health Care District property taxes. In a press release, Lewis accuses the Medical School of refusing to release "any part of its strategic plans for health care for the poor," because those plans may be "proprietary."

"It is quite difficult to understand how UT's strategic future plans for the poor's health care are proprietary," Lewis continues, and concludes: "Does it intend to profit off the poor? If so, it should share the profits with Central Health, benefiting the poor and taxpayers." Lewis and an allied group, Help Ensure Accountable Leadership and Transparency in Health, have repeatedly accused the Med School of misappropriating Central Health funds for purposes other than direct health care for the poor.

Dell Medical School spokesman Stephen Scheibal responded to Lewis' latest accusations in a statement: "The Dell Medical School released 41 documents, including 28 strategic planning documents, in response to Mr. Lewis' open records request. ... UT-Austin is seeking guidance from the attorney general on whether to release an additional six documents to ensure that we are complying with Texas public information laws and the exemptions they specify.

"The six documents include details about specific processes and plans that could improve health in Travis County and Central Texas. We don't want to compromise the potential benefits we might offer this community by sharing information that may not be public and from which others might seek to profit. We want to ensure that we are complying with the law, and we will follow the guidance we receive from the Texas attorney general."

A version of this article appeared in print on June 9, 2017 with the headline: Lewis vs. Med School

How Efficient Is Your City?
Austin may be about to find out