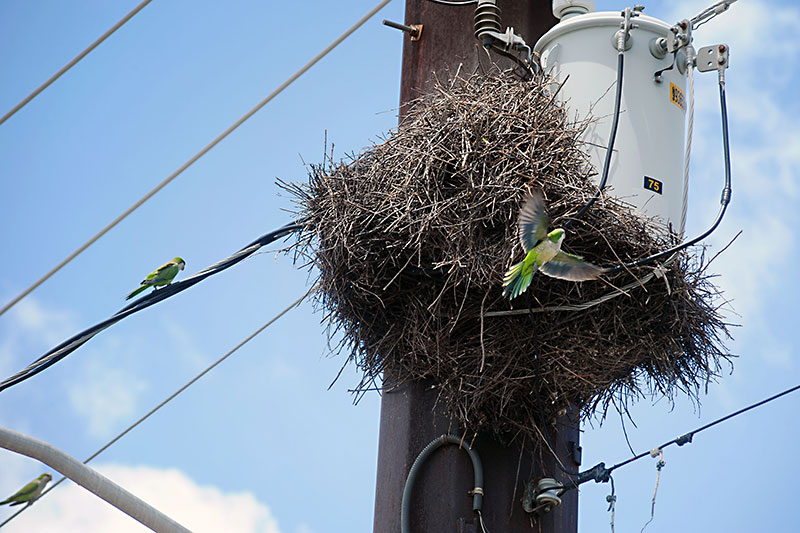 Austin Energy caught flak last week from the Travis Audubon Society, which accused AE of "heartless" methods in removing monk parakeet colony nests from utility poles. AE responded that some nests present fire hazards and danger to workers, when the lines receive monthly maintenance. "Crews take extreme care to ensure that their actions do not cause a fire or electrical interruption or personal injury," said AE COO Elaina Ball in a statement, while welcoming "best practice" advice from the Audubon Society. The Audubon folks say they're on the case .... – Michael King (Photo by John Anderson)

City Council Countdown: With three regular meetings until the July hiatus, City Council meets today, June 8, with an eye on the clock, the budget, and CodeNEXT (subject of work sessions each Tue.-Wed. this month; see "Why Does Everybody Hate CodeNEXT?" June 9). Among the subjects today are park use, the search for a city manager, and the usual set of zoning cases. See "Council: Park It Here," June 9.

Council also plans to vote on submitting a proposal for a grant from the New York-based nonprofit Vera Institute of Justice to provide legal representation to immigrants in deportation proceedings. If awarded, the city will use the funds to match the existing grant agreement with Catholic Charities of Central Texas.

SXSW in Exile? U.S. Sens. Bob Menendez (D-New Jersey) and Catherine Masto (D-Nevada) urged South by Southwest to pull out of Texas on Wednesday, so long as SB 4 is law. SXSW Managing Director Roland Swenson said he agrees that the law "stands diametrically opposed to the spirit of SXSW," but brushed off the senators' request. "Austin is our home and an integral part of who we are."

Another New Hospital: Houston-based Texas Children's Hospital will expand into Austin over the next five years, with four pediatric urgent-care clinics, 18 pediatric primary-care practices, and two maternal-fetal medicine practices. An urgent-care clinic will open in South Austin next spring.

It Can Wait: Abbott signed House Bill 62, banning texting while driving, statewide, though he also said he now wants legislation pre-empting any local regulation of mobile phone use while driving.

Motion for Re-Rehearing: Travis Co. District Attorney Margaret Moore "remains firmly committed" to earning a rehearing for the Charles Kleinert case in the 5th Cir­cuit Court of Appeals, said a statement issued last week. She's "considering all available options," including the possibility of taking the case to the U.S. Supreme Court.