Campaign 2018: Can Anyone Beat Lamar Smith? 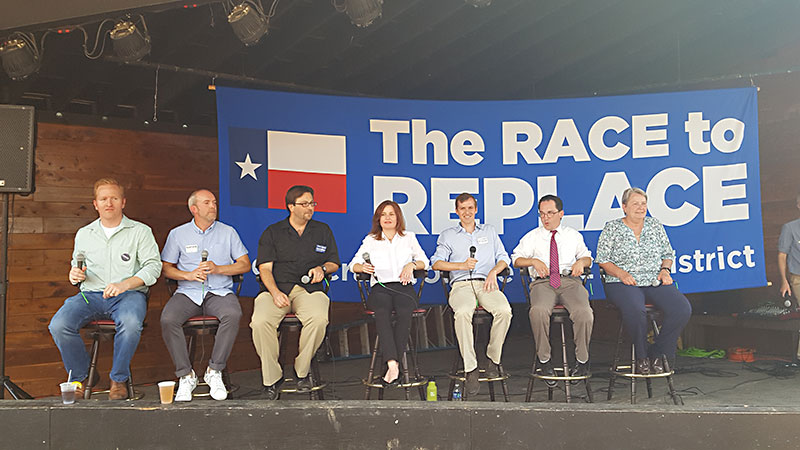 Democratic candidates to replace U.S. Rep. Lamar Smith gather for a campaign kickoff Saturday (June 3) at the Scoot Inn. Candidates are seated in the order that they're discussed in the corresponding story. (Photo by Michael King)

Ready or not, Campaign 2018 has begun. An early local kickoff occurred Saturday evening, June 3, at the Scoot Inn, where seven Democratic candidates trumpeted their determination to "Replace Lamar Smith," the 31-year GOP incumbent in U.S. House District 21 – one of Austin's five heavily gerrymandered con­gress­ional districts, linking West and Southwest Austin with a wide swath of the Hill Country and part of San Antonio. The race is already garnering national attention because of Smith's role as chair of the House Science, Space, and Technology Com­mit­tee while also being an aggressive denier of climate science.

The seven candidates onstage Saturday were united in their opposition to Smith, and indeed on most issues likely to receive Dem­o­cratic support in next year's elections. The likeliest question for the nearly 200 people in attendance was how to draw qualifying distinctions among the candidates. Adam Reiser of host organization Race to Replace (www.replacelamar.com) moderated the forum, doing his best to spread the questions and the issues among seven candidates – who are not all of those considering a Dem primary run.

Some brief notes on the candidates:

• Derrick Crowe (www.electcrowe.com), the communications director for SAFE, has experience as a congressional aide (for Nancy Pelosi, among others), and cited experience in "fighting the GOP" and in defending Social Security and Medicare. He described a small-town background near Amarillo, and near a refinery "polluting our air and providing campaign funding for Smith." Crowe said he is running to promote an "economy that works for everyone" and a government that "supports science."

• Joseph Kopser (www.kopserforcongress.com), founder and president of Grayline (tech consultants), earlier established the RideScout transportation app, and continues to work as a tech entrepreneur. He emphasized this experience as well as his 20 years as an Army Ranger. He said his campaign will "avoid ideological extremes": "It's in the middle that we can find the progress to move our country forward."

• Elliott McFadden (www.mcfaddenfortx21.com), the director of Austin B-Cycle, is also a former chair of the Travis County Demo­cratic Party, and described himself as a "transit and housing activist." He recalled his grandfather, a small-town doctor, providing medicines at cost and being among the first to treat infections with penicillin, and connected it to his own experience in helping establish the Travis County Healthcare District (now Central Health). "This president – and this congressman – is attacking science and the truth," he said, "and is threatening us in the work that we do."

• Chris Perri (www.chrisperrifortexas.com), an attorney who directs the pro bono UT-Law Expunction Project, said his vocation as a criminal defense attorney began when an innocent man from his hometown was executed. He recalled a "Star Trek" principle – "the first duty is to the truth" – noting that incumbent Smith "denies the truth of climate change and is more interested in promoting a corporate agenda than representing his district."

• Rixi Melton (www.rixiforcongress.com), a working mother and small-business consultant, said people are "exhausted by the burdens of an unbalanced economy" and emphasized her support for universal health care. "If we can treat corporations like people," she said, "we can treat people like people."

• Scott Sturm (www.sturmforcongress.com), a paramedic since 2003, said he entered the race because "the polarized country tearing itself apart is making me sick inside." His primary focus is on medicine and improving the health care system, telling skeptical friends he's running because "I'm a U.S. citizen, and I believe in this country ... and I'm willing to fight for people's rights."

• Mary Wilson (www.electmarywilson.com) describes herself as a "mathematician and a minister," and recalled her upbringing in farm country, that she believes will give her insight to D21 residents. She began by noting that the U.S. has the highest maternal death rate among developed countries, and that Texas is 51st – below the District of Columbia – in the U.S. "I think we can do better," she said.

That's quite a litany, and it doesn't include emergency physician Ryan Allen, who's also contemplating a run. San Antonio-based labor and health care activist Tom Wakely, who challenged Smith as a Democrat in 2016, has also declared, though as a "post-partisan" who says he might run as an independent. (And among the audience Saturday evening was top-hatted "Crazy Carl" Hick­er­son, passing out fliers that declared himself a candidate supporting, among other things, exporting hemp, single payer health care, and "annexing every country that has an Ameri­can military base.") Moreover, D21 may well be redrawn by the courts later this year – meaning the candidates aren't yet certain who their voters are (or indeed if they themselves will be living in the district) – although the primary is likely to be decided by Dems in the Travis County end of the district.

There were frankly no dramatic issue distinctions made on Satur­day, although Crowe and McFadden have the most relevant political experience, and Kopser appears to be looking for a middle-ground to run in a district drawn for Republicans: e.g., he was the only candidate to defend hydrocarbon fracking if done with "transparency and oversight." (On gun control, Kopser had the best one-liner: "If you really want automatic weapons and big magazines, you should do what I did and join the Army.") Of the others, Melton and Perri seemed most prepared, but all the candidates declared their support for equality, health care, scientific understanding, and "getting money out of politics." But whoever wins the Dem primary, hoping to beat Smith, the Koch brothers, and their deep-pocketed allies, will need plenty of money.

The Effort to Unseat Rep. Lamar Smith Is On
Democrats line up to challenge climate-science denying GOP incumbent