A Land Use Lexicon 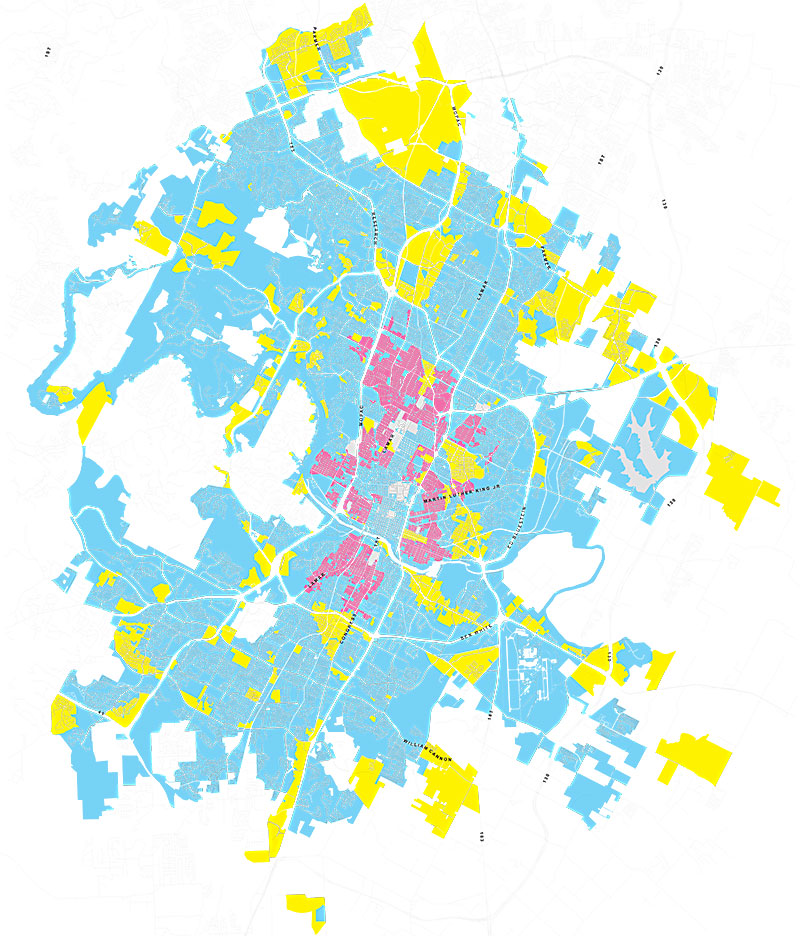 Hybrid Land Development Code: The proposed CodeNEXT is a combination of transect (form-based) and non-transect (use-based) zones. Together they provide different degrees and methods of control. In addition, much of the city is slated to remain under the existing use-based code.

Use-Based Code (Non-Transect Zones): The most familiar type of zoning, also known as Euclidean (for Euclid, Ohio), separates and controls land use primarily by usage: residential (single or multi-family), commercial, industrial, and so on. Austin's current code is use-based, as is the section of new code in CodeNEXT known as non-transect zones, which cover about 45% of the total area in the city.

Form-Based Code (Transect Zones): This approach regulates primarily the scale and shape of buildings instead of their uses. It's the basis of the CodeNEXT transect zones. Under this format, different zones will be determined by density (T3 is a neighborhood similar to SF-3, while T6 is reserved for the densest urban core). In the current plan, most of this type of form-based zoning is found in central neighborhoods (East Austin, near north, and in the 78704 ZIP code). It makes up about 30% of the city.

Legacy Code (Chapter 25): At present, roughly 24% of the city is set to remain under the current code – largely a mix of transit oriented districts, planned unit developments, neigh­bor­hood com­bining & conservation districts (NCCDs), Muel­ler, and other highly negotiated small area plans that drafters deemed too complex to take apart. The LDC is city law, often referred to as Chapter 25, its place in Austin's Code of Ordinances.

ADUs: Accessory dwelling units are secondary residences on one residential lot, often accessed through an alley. Currently, ADUs are not allowed in SF-2 zoning, which includes the majority of West Austin. CodeNEXT would allow ADUs to be built throughout the city, except in rural (RR) and very low density residential (VLDR) zoning.

Upzoning: Increases the amount of building(s) that can be built in a given area. CodeNEXT planners have often been asked if the new plan will upzone properties along corridors and city centers for additional entitlements. The project's official goal calls for "right-size" zoning entitlements.

Downzoning: Reduces the amount of building that can be done in a specific area.

PUDs: A planned unit development is a complex development planned as a single project with its own zoning laws that are expected to be "superior" to conventional regulations.

Conditional Overlays: Used on specific properties in combination with zoning districts to "further restrict" land use. COs are often applied to reduce building heights and impervious cover limits, as in a watershed, and to restrict permitted uses allowed in a zoning district. Staff reports that they apply to about 12,000 parcels citywide.

Envision Tomorrow: An online calculator-type planning tool that "helps the community understand the implications of various planning strategies," according to consultant Alex Joyce.