Is the Special Events Permit Parking Program a Scalper's Delight?

Say goodbye to non-resident parking near the city's big events 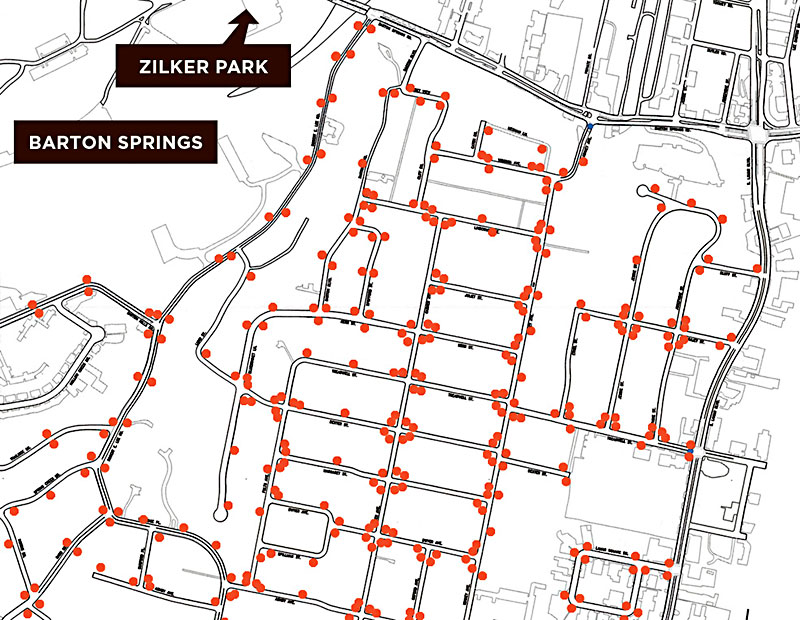 Above, a map of proposed "No Parking" signs that would go up in the Bouldin Creek neighborhood as part of the "Special Events Permit Parking Program" – damn near every single intersection.

The never-ending struggles over Downtown or near-Downtown parking spaces reaches a crescendo during "special events" – ACL Music Festival, SXSW, Zilker Kite Fest­iv­al, et al. – and bears a particular urgency in the neighborhoods near Zilker Park, often the site of such events. The City Council-appointed Parkland Events Task Force, meeting last year, came up with what it considered a solution: a "Special Events Permit Parking Program" (akin to the existing Residential Permit Parking Pro­gram in some neighborhoods), that would issue a limited number of temporary parking permits to residents of the Zilker, Barton Hills, and Bouldin Creek neighborhoods, and otherwise ban nonresident parking during big events. (The Fiesta Gardens neighborhood is also mentioned in city documents, but subsequent action proposals add only the Deep Eddy area.)

Recent news reports suggested the program was ready to implement – but a May 17 release from District 5 Council Member Ann Kitchen promises, "The next step is that [the Austin Transportation Department] will host a public meeting in June to seek feedback on a draft SEPPP," followed by a one-neighborhood pilot. That may be because while there is some support for the program, it's hardly universal. Zilker Neighborhood Association President Jeff Jack told the Chronicle last week, "We've got to do something" about the parking pressure (which includes objections to trash and noise) during events, but neither he nor other residents are sure about the solution.

Jimmy McArthur, chairman of Friends of Zilker – also a registered neighborhood association that he says was not even notified of the initial proposal – says that among FoZ members who've expressed an opinion, only "a couple of people" want it. Initially described as covering the whole neighborhood, the SEPPP has since become "opt-in," via support of 60% of a street's residents, with homeowners receiving a limited number of street parking permits for themselves or guests. McArthur says his members have reported few problems from outsiders parking during events, and that one of the advantages of close-in neighborhoods is precisely the ability to walk to special events. "It's a small, vocal minority that want people off the streets that are pushing this," he said.

A couple of neighbors have also noted another potential unintended consequence of the proposal – the creation of a gray market in private parking permits, expected to cost $15 each. Noted one resident: "The 'exclusive luxury Zilker neighborhood event parking passes' will likely fetch a [10x] premium on Craigslist. ... It'll be interesting to see if a year from now we have the same number of cars on the streets near the park, but instead of being a first-come first-serve it'll just be people who purchase parking passes [online]." Commented Jack, "You can scalp any ticket you want."

A version of this article appeared in print on June 2, 2017 with the headline: Scalper’s Delight