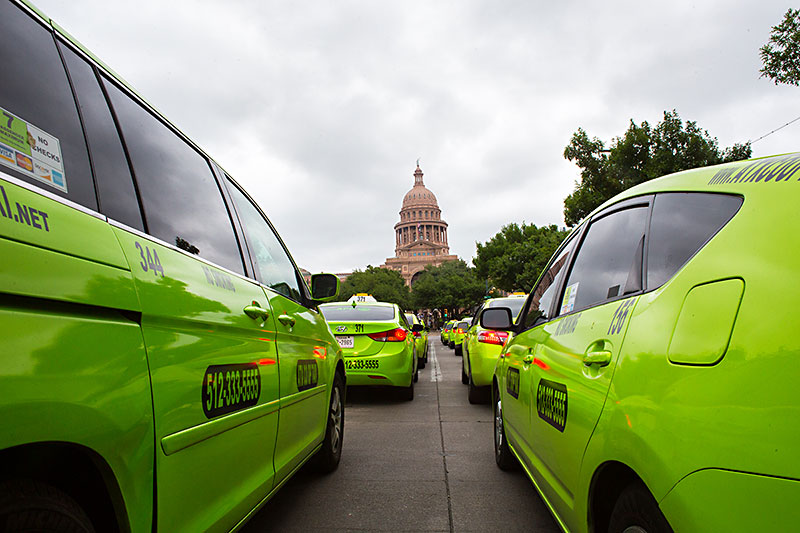 Cabs from ATX Co-op Taxi drive in unison from the Chevron on Riverside up Congress Avenue toward the Capitol on Friday in a demonstration of protest against House Bill 100. The measure, signed into law by Gov. Greg Abbott on Monday, eradicates local regulations on transportation network companies – thereby allowing Uber and Lyft to re-enter Austin on their terms. Roughly 50 drivers joined the procession. For more, see " Uber and Lyft Are Back, in Case You Missed Them," June 2. (Photo by Jana Birchum)

No regular City Council meeting today (June 2) – the next regular meeting is Thu., June 8 – but the dais began diving into CodeNEXT on Wednesday, the first of four work sessions on the code. "Council: Code Blue," June 2.

R.I.P. Tom Stribling: Interim Labor Relations Officer Tom Stribling passed away on Tuesday morning. He was 60. Stribling, who previously worked as an attorney for CLEAT, the state's largest police union, was hired as the city ombudsman in 2011, and took over at the labor relations office in February. He's survived by his wife and three children.

Fetal Burial Rules: Attorney General Ken Paxton is requesting the 5th Circuit Court of Appeals reverse a federal judge's block of the state health department's rule forcing abortion providers to bury or cremate fetuses. Paxton previously appealed the judge's opinion, which called the rule a "pretext" for restricting abortion access. A similar rule is found in anti-choice SB 8, passed by the Texas Legislature in May.

Christi Long, a local transgender activist and drag queen who performs under the name Christi Foxx Paris, was brutally attacked Sun., May 28. Long was raped and beaten with a hammer by a supposed "friend." She sustained numerous head injuries (requiring 12 staples) and a concussion. Friends have started a GoFundMe to help cover Long's medical bills: www.gofundme.com/fundraiser-for-christi-foxx-paris.

Dread Pirate Roberts Ross Ulbricht, architect of online drug market the Silk Road, had his life sentence conviction upheld by a New York court this week. Ulbricht, an Austin native who went to Westlake High, was convicted in Feb. 2015 of seven crimes, including narcotics and money laundering conspiracies.

Bring 'em Back: Is the Texas Legislature going to hold a special session? Gov. Greg Abbott said he'll announce a decision sometime this week. Context clues suggest a recall of state lawmakers is all but inevitable.