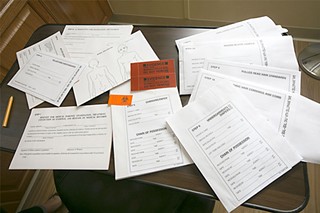 Four detectives previously assigned to the Austin Police Department's Parks Enforce­ment and Organized Crime units will run the department's Sexual Assault Cold Case unit, a new initiative that'll review incoming results from the city's massive rape kit backlog as processed kits return from outsourced labs. Interim APD Chief Brian Manley said last Wednesday that the department has already sent out 1,500 of its 3,000 backlogged kits for testing – some pertain to closed cases in which DNA evidence was not needed to secure a conviction; the rest remain unsolved. (State law requires that the entirety of a state's backlog be tested, even if the case is closed.)

The unit's formation represents a next step in APD's reconciliation for a forensic lab that by last June had suffered so many systemic failures that a recommendation from the state's Forensic Science Commission left the department with no choice but to shut it down and start anew. (Or not. In March, news broke that APD would hand control of its lab over to the Department of Public Safety.) It's designed in part to assuage concerns within the Sex Crimes Unit, which since the lab's shuttering last year has worried about the pending influx of newly processed cases. Sandra Benningfield, a sergeant from that unit, told the city's Public Safety Com­mis­sion in November that they could use more manpower: four detectives and another sergeant. Manley seemed to confirm those concerns: "To bring additional cases that we're now starting to get results on – we realized ultimately it would have moved the delay from the processing of the kits to the processing of the results."

APD's Public Information Manager Anna Sabana told the Chronicle that the unit is partially up and running, with three detectives in the training phase. The fourth, currently working cold cases, is a senior detective with two years' experience in sex crimes. Advocates at SAFE, the Sexual Assault Resources and Recovery Team, and UT's Institute on Domestic Violence & Sexual Assault are working together with APD to help identify best practices for notifying survivors with backlogged cases. "We're really happy this is happening," said Aja Gair, SAFE's senior director of Community Advocacy. "APD is really thinking about justice for survivors and we definitely hope they follow a victim-centered process. Reaching out to them, while great, can be so triggering."

At a press conference last Wednesday, Manley said the trajectory of cases moving through the new unit is as yet undefined, and warned against assumptions that creating a cold case unit will lead to the cracking of all unsolved sex crimes. "There may be follow-up on the cases," he said. "But there's also a possibility that – although there [may be] nothing else we can do with the cases which we collected evidence from – if we've now identified a profile and loaded it into the CODIS system, that may link to other crimes that have been unsolved to this point."