Chris Rogers is still considering the subject of a new mural Before ... (Courtesy of Chris Rogers)

Muralist Chris Rogers told the Chronicle Tuesday that he and Las Cruxes owner Veronica Ortuño reached an agreement on what to do about the whitewashed mural on the wall of the building she recently began leasing – and that he will be responsible for painting a new mural, though at this point it's not decided what the mural will depict. (Ortuño did not respond to inquiries seeking confirmation.) He said the agreement came after a week spent wrestling over the fate of the three-year-old mural, which Rogers put up on a wall at 12th and Chicon, featuring famous black musicians like Tupac, Prince, and Bob Marley.

Community members gathered Monday evening to discuss the mural's whitewashing, which renewed alarms of gentrification in the historically black Eastside area. The standing-room-only town hall was put on by Six Square – a nonprofit devoted to celebrating and preserving Austin's Black Cultural Dis­trict – whose executive director Nefertiti Jackmon noted: "Once murals are painted over, the only thing you can do is figure out the next step." 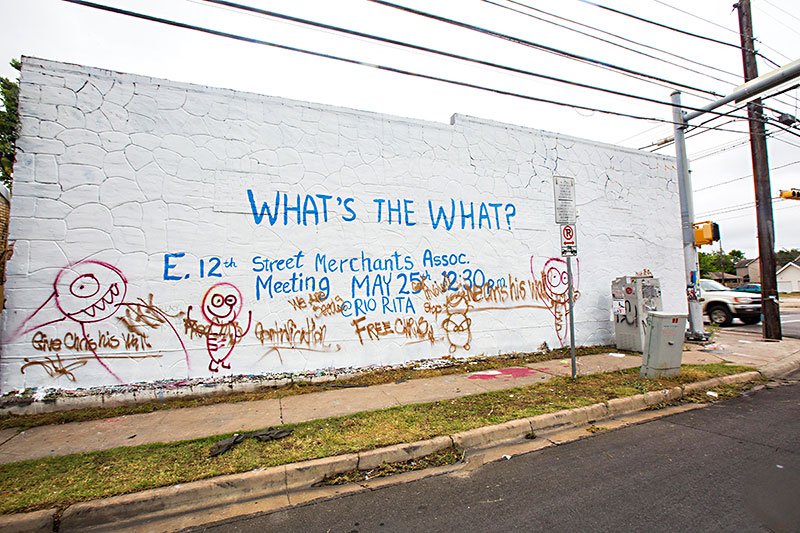 ... and after (Photo by Jana Birchum)

Both Rogers and Ortuño, the person responsible for the mural's removal, were in attendance. At the onset, Rogers voiced his desire to repaint the wall, and Ortuño offered an apology to both the artist and community for not including either in her decision. The two-hour meeting maintained a cordial level of respect, but for Olivia Over­turf – who organized Friday's protest outside Las Cruxes and claimed responsibility for the graffiti that appeared on the wall during that event – the dialogue moved between "sort of OK and horribly not OK," citing a lack of perspective from the neighborhood's youth. Many attendees requested Ortuño return jurisdiction of the wall back to the neighborhood by letting Rogers restore the mural; others wanted to know how Ortuño planned to make the community feel welcome at Las Cruxes. At its previous location on Cesar Chavez, the clothing store and art gallery hosted free or sliding scale mixtape nights and art openings. Ortuño said those events will continue in the new space with the addition of a women's group and chess club.

“Once murals are painted over, the only thing you can do is figure out the next step.” – Nefertiti Jackmon, Six Square

Ortuño said she previously planned to replace Rogers' mural with a piece depicting Austin-based artists of color. "Now I'm here to figure out how to move forward with the community," she offered. Attendees noted that Rogers' mural was not the first one removed. Earlier this month, the Mama Sana mural depicting a black pregnant woman was replaced with a new "Live Music Capitol of the World" piece. According to the East 12th Street Merchant's Assoc­i­a­tion, Eureka Hold­ings – a Dallas-based developer that recently purchased 47 Eastside properties – commissioned Mila Sketch to repaint the mural. Sketch, also in attendance Monday, told the crowd she'd met with owners of Mama Sana prior to painting over the piece and also reached out to the original artist in New York. Additionally, she said she surveyed the community with several mural options before putting up the chosen piece. Though not related (the Las Cruxes building is currently leased by Randall Stockton, the proprietor of a number of local hangouts), the near-concurrent removals have left the community angry and confused. Several attendees expressed concern about the possibility of more high-end condos going up in the neighborhood and pricing out longtime residents.

A discussion of Ortuño's decision as well as a consideration of what the new mural should feature is scheduled for the next East 12th Street Merchant's Association meeting, Thursday, May 25, 12:30pm at Rio Rita.