Lege Lines: Respect Us or Expect Us

The House gets its revenge on Dan Patrick 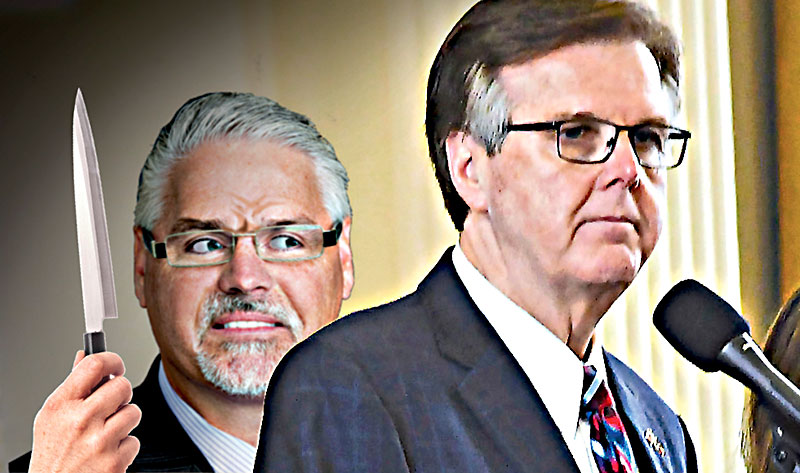 by The Chronicle Art Staff

Every session, there's a desperate hope that this will be the one where, against all logic and experience, the two parties (or the two chambers) will suppress their crazy wings for just long enough to execute something constructive. That hope collapsed for the 85th session this week, as the simmering war between the state's House and Senate went nuclear.

The mood on the House floor on Tuesday could be summed up no more perfectly than in one image: Senate Public Education Committee Chair Larry Taylor, R-Friends­wood, standing behind the desk of House Education Committee Chair Dan Huberty, R-Houston. Neither man was interacting with the other. Huberty was hard at work, answering questions from fellow House members; Taylor, awkwardly glad-handing before heading to the Senate.

Over the weekend, Taylor and Lt. Gov. Dan Patrick had royally screwed Huberty and the House over school finance reform measure House Bill 21. The original language was a response to the 2016 court ruling that Texas' school finance system, while legal, is far from good (see "2 + 2 = 5," April 7). It was part one of a multi-session, multi-layered attempt to rebuild a mechanism that everyone who's been paying attention agrees is outmoded and underfunded – the result of two years of negotiation and nuance, with a $1.6 billion injection that would ensure no district would do worse, and some would do better, when it came to state contributions.

The plan was imperfect, but Huberty assured lawmakers that it was just part one, and that next session would bring deeper reforms, adding stability and fairness. Instead, the Senate, under Patrick's hand, gutted the measure, dropped the extra cash to $500 million, and pushed in school vouchers. Even worse, there appears no sign of any funding mechanism to cover the Senate cash claim, while the House had labored long and hard to ensure that its pledge to school districts would be honored. Patrick then had the audacity to flaunt his political extortion, saying he couldn't believe that "any Texas lawmaker would vote against a half billion dollars for public schools, as well as voting against children with disabilities, simply to oppose school choice." Pea­cock­ing even further, he told the House that if they passed his castrated HB 21, he would then consider pushing the contentious A-F school rankings back another session.

Patrick held all the cards, or he acted like it. But by midweek, even staunch party loyalists were clearly furious with his grandstanding – and done with his attempts to force the most hard-line language of unpopular, divisive measures like the anti-trans bathroom bill into every passing measure. The Senate keeps sending amendments over, and holding bipartisan House bills hostage until they get their way. Finally, on Wednesday, May 24, the House fired back, placing Senate bills on the back burner. As we went to press, the Senate-mangled HB 21 neared the floor, and the possibility was rising that the House would capsize this deceptive measure rather than pass it for a few crumbs.

Not that the House is blameless in this debacle. Last week's bill-kill spree by wrecking crew conservatives in the House Freedom Caucus ("Lege Lines: Texas Temper Tantrum," May 19) saw them enacting Patrick's will, but not all fingers are pointed at the lieutenant governor. If Speaker Joe Straus had done a better job of wielding the whip and denying them a platform, the House would look more unified. If he caved to House hard-liners now, one senior Democrat pondered ruefully, why did Dems originally bother backing him for House speaker?

Straus' actions remain a side issue to what has become a free-fire zone between House and Senate, one in which the lower chamber may be getting the last laugh. Rep. Garnet Coleman, D-Houston, had sent over his HB 4180 to the Senate as a Christmas tree bill (basically a blank slate for carrying a stack of bills that would otherwise fail but can be added on as amendments). Once it got to the Senate, Republicans larded it with all the bathroom bills and property tax caps they could. Coleman then coolly announced that he had no interest in passing the measure as it stood, and the Senate had wasted its time – just as he had planned.

So after weeks of seemingly letting the Senate get the upper hand, the House has come back roaring in the session's dying days. Patrick is getting ever more histrionic, threatening to demand special sessions unless the House caves to his version of tax cuts, and his version of the bathroom bill, and his version of discriminatory foster care reform. Considering the animus from the lower chamber, he may not want to incur their wrath. As Rep. Harold Dutton, D-Houston, announced Tuesday to cheers from both sides of the aisle: "When the Senate won't respect us, they need to expect us."