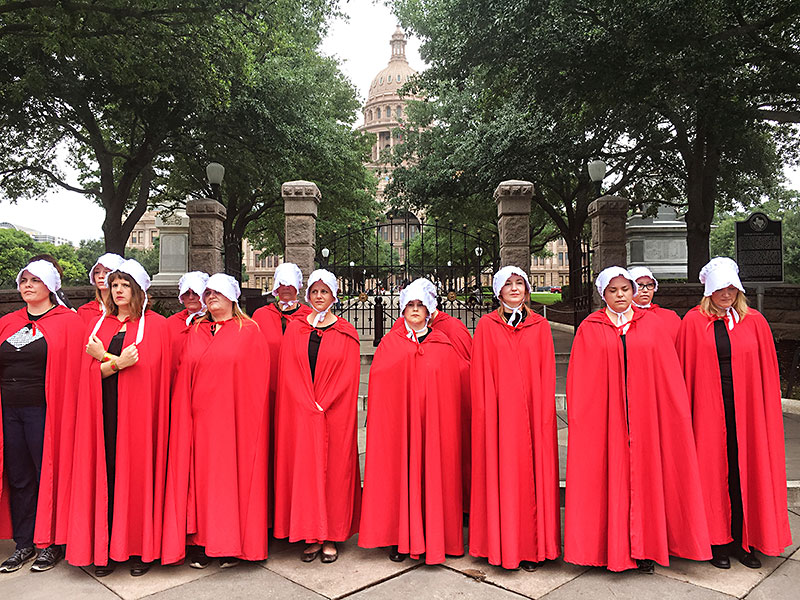 More than two dozen activists stood outside the Capitol in red robes and white bonnets Tuesday to issue a public warning about the possible fate Texas women could face if legislators continue to attack reproductive rights. The women were dressed as characters from Margaret Atwood's The Handmaid's Tale, and rallied against the slew of anti-abortion measures proposed and debated this session, including package bill SB 8, passed by the House last week. Atwood's 1985 novel (currently experiencing a resurgence thanks to the adaptation streaming on Hulu) is a cautionary tale depicting women who are stripped of their rights, including abortion care, in a Christian theocracy. This Lege session, handmaids have made appearances in the Senate and House galleries during abortion-related bill debates. – Mary Tuma (Photo by Jana Birchum)

No regular City Council meeting this week – the next is June 8 – but Council expects to be conferring in work sessions on CodeNEXT and budget details. "Council: The Numbers Game."

Still no Sanctuary: In a May 22 memorandum, Attorney General Jeff Sessions reiterated Trump administration policy to sanction "sanctuary jurisdictions," defined as those which do not share "immigration status" info with federal authorities – neither Austin nor Travis County fit the definition.

Bad, Bad Budget: While President Trump is engaged in a world tour, his administration released a proposed budget that would boost military spending by 10% and slash social spending, including Medicaid, food stamps, student loans, even Meals on Wheels. Former Reagan budget director David Stockman called it "dead before arrival."

Sine Die is nearly here. The 85th Legislat­ure's regular session ends Monday. A lot still has to happen, though; a special session remains a possibility.

School finance reform looks dead for the session, as the Texas House refused to accept Senate amendments that would cut the increase in funding from $1.6 billion to $530 million, and dedicate much of that increase to school vouchers and construction cash for charter schools. See "Lege Lines: Respect Us or Expect Us."

Where Is Lamar? The list of candidates to challenge GOP Congressman Lamar Smith for his HD 21 seat continues to grow. See "The Effort to Unseat Rep. Lamar Smith Is On."

South Congress Shooting: Police are seeking witnesses of the fatal South Congress shooting last Friday morning, during which 51-year-old Van White was killed. APD has made no arrests.

Memorial Day is Monday, and the Chronicle office is closed – though we'll be cooking online with coverage of the last day of the Lege session.