Will This Seaholm Intake Plan Take?

Austin eyes a new redesign for the Downtown intake facility

Austinites have been considering possibilities for the redesign and reuse of the Seaholm Intake Facility – just below the finally converted Seaholm Power Plant on Town Lake – at least since 1998, when the Chronicle published its first story on the subject. In the latest effort, on Monday, May 15, Mayor Steve Adler and the Austin Parks and Recreation Department announced a "collaborative planning study for the future of Seaholm Waterfront," with this year's initial planning study to be funded by the Austin Parks Foundation and The Trail Foundation, for $450,000. 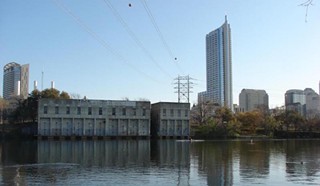 Courtesy of Austin Parks and Recreation

In a statement released Monday, the City said, "The plan – which will rely heavily on public input via online platforms, stakeholder meetings, and public open houses – will serve as a road map for future park improvements and the repurposing of the decommissioned Seaholm Intake structures for public use and recreation." Chicago-based Studio Gang and a group of local architecture and design consultants will develop a long-range vision for the facility, and "conduct stakeholder meetings and public open houses to determine the best uses for the site and building based on the community's input."

"We're excited to help unlock the potential of this historic building, nested in an incredible system of parks and trails, along one of the great downtown waterfronts in the United States," said Gia Biagi, principal of urbanism at Studio Gang. "We're looking forward to working in partnership with the city and its citizens to activate this important public asset."