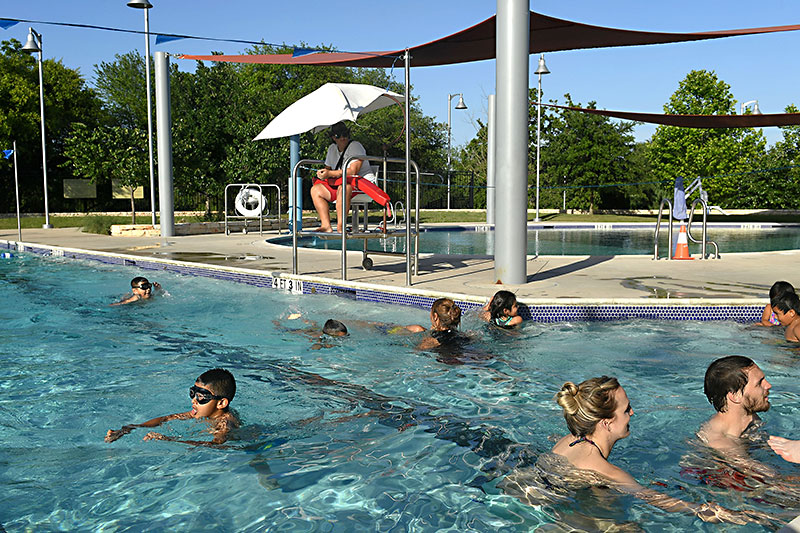 In January 2015, when the Aquatics division of the city's Parks and Recreation Department faced down yet another summer of citywide lifeguard shortages, staff decided to try a new way to hit their numbers – by targeting younger lifeguards. Together with the Austin Independent School District and YMCA, PARD launched SwimATX, a learn-to-swim program, which not only counts toward high schoolers' P.E. credit, but also finishes with a free lifeguard certification course that puts students on the path to employment. The program began operations at two pilot schools: Lyndon B. Johnson High and John H. Reagan High.

The initial goal of SwimATX was to train a large number of students, so that the city could have an existing, already certified group of employees come summertime. Lifeguard shortages have long been a problem here in Austin. For the past five years, PARD has struggled to recruit the staff needed to keep pools and programming operational. Last year, the city was about 230 lifeguards short of its target; subsequently six pools were closed entirely, with five others operating at reduced hours. Of these 11 impacted pools, five lay east of I-35, impacting the communities SwimATX draws from.

“These kids use [Bartholomew], they use Dottie Jordan, they use all the Eastside pools, and they say, ‘Well, most of the guards here are white.’ And I say, ‘Well, you’re about to change that.’ Because it’s their pool, their community.” – Coach Jerry De La Huerta

SwimATX hinged on the idea that if you could teach someone to swim, you could teach them how to save a life. Ambitious initial forecasts had students jumping straight into lifeguard training, practicing saving techniques and deploying lifeguard lingo from the outset. But that quickly came to be seen as unrealistic for the program's target community of East Austin, where the city sees a higher concentration of minorities – and, perhaps uncoincidentally, a greater shortage of lifeguards, and thus shuttered pools.

These shuttered pools, in turn, can exacerbate problems of water education and safety for minority groups. The Centers for Disease Control and Prevention, looking at statistics from 1999 to 2010, put African-American children ages 5 to 19 at a 5.5 times higher likelihood of drowning in swimming pools. Aware of these numbers from the CDC, SwimATX Program Director Wayne Simmons also acknowledged the higher drowning rates in Latino communities and told the Chronicle, "It's about getting to them at a young age. ... Talking to them about water safety."

A lot of kids have a fear of water. That's something that Reagan High coach Jerry De La Huerta thought about at the first program meeting he attended. "A lot of kids are scared, saying, 'I don't know how to swim,'" he recalled. And others didn't appear to consider the first crucial steps in transforming a non-swimmer into a strong swimmer. He thought: "How is the certification going to happen if the kids don't know how to swim? That's when we said, 'Why don't we make it a learn-to-swim program with the lifeguard certification at the end?' The kids can learn all the skills, and at the end, they have the opportunity to get lifeguard certified."

De La Huerta has been sympathetic to his students' anxieties, having been personally touched by the harrowing reality behind the CDC drowning numbers. One of his former students drowned in Lake Travis last summer, he said. "I had him six or seven years ago – way before the program – and when I saw his picture, I thought: 'What happened?' Reading the story was shocking and hurtful, because he was a great kid. ... I thought about how if we could have had this program over there, maybe this wouldn't have happened."

Though students in East Austin statistically are less likely to know how to swim, that doesn't mean they don't wish to learn. De La Huerta can remember in the early days of the program during winter mornings when the temperature was only 32 degrees. "We told the kids we're not going to get into the water," he recalls. "But they were so excited about the program. The pool is heated, but it's outdoors. And they said, 'No, coach. We can do it!' Man, they jumped in the water. I had a couple layers on, and these guys were just swimming. They're go-getters."

The students' enthusiasm is evident. At Bartholomew Pool on East 51st Street, students partner with one another and run through lifeguard drills, pulling their "victims" out of the pool to save them. Under De La Huerta's supervision, the kids exhibit no rowdiness, and everyone listens as they learn how to properly grab a bicep to save someone who's drowning.

But other considerations outside of eagerness come into play. Frequently with kids involved with the SwimATX program, the issue that's been keeping students from learning how to swim has been an excess of life responsibilities, rather than a dearth. De La Huerta said that many students often must take care of their young family members, and others are unable to submit the necessary guardian paperwork because their parents work two or three jobs at a time and can't make it over to the pool to drop off the program's forms. These students are being pulled in many directions, explained De La Huerta, so SwimATX has had to adjust. All transportation to and from the pool is now provided by the program, and the usual five-day lifeguard certification has been extended to seven days in order to accommodate busy student and parent schedules, often complicated by extra jobs and child care responsibilities. This means switching finals schedules around and looking for flexibility schoolwide, so that SwimATX students can focus on the certification during the last week of classes. The changes proved a strain at LBJ, which left the program. Reagan continued on with SwimATX, eventually joined by Eastside Memorial in January.

"It's really eliminating some of the barriers that previously were present," said Simmons. Between the YMCA and PARD, students are now able to take the class, receive all the necessary gear, and take the specific lifeguarding certification course during the program's final week – a curriculum that usually costs between $225 and $275 – for free. Since late last year, the city has also raised the base pay for lifeguards to $13.50 per hour, with the possibility to earn more the longer they work. Eventually, the growing pay could even transition into a full-time job.

With these measures, not only is the program seeking to correct the general lifeguard shortage, but it's also trying to diversify its workforce. "Because these kids use [Bartholomew], they use Dottie Jordan, they use all the Eastside pools, and they say, 'Well, most of the guards here are white.' And I say, 'Well, you're about to change that,'" said De La Huerta. "'You guys have the opportunity to change that.' 'Oh all right, Coach, cool cool.' Because it's their pool, their community."

Though East Austin is the current focus for SwimATX, Simmons hopes the program will eventually grow to reach more schools within AISD, and in time more school districts outside of that. Drowning rates and access to water safety education are not issues restricted to East Austin. They impact young swimmers throughout the state, and even the country.

"Last year, looking at the statistics here in Texas, there was a 42 percent increase in fatal youth drownings across the state," said Simmons. "That is completely the wrong direction for those statistics to be going, so we really want to make sure that we're teaching everybody in the community how to swim, first and foremost."

Watching a swim practice at Bar­tho­lomew, it's easy to imagine a future where those percentages take a swift dip. 201 students have already participated in the program. In spite of many students being too young at the start of the program to certify (you must be at least 15), 152 students have passed their certification.

Back at Bartholomew, a YMCA instructor stands at the edge of the pool, looking down at a group of high school students clad in those iconic red swimsuits. As the students listen attentively, the instructor shouts: "You're a lifeguard; you're a rescuer; you're in control of the situation!"

The students begin to swim, and you believe it.

For our Summer Fun issue, we’ve created themed playlists to go with each story. Find more playlists at austinchronicle.com/summer-fun.

See information about lifeguarding at www.austintexas.gov/department/lifeguarding-austin.

A version of this article appeared in print on May 19, 2017 with the headline: “Their Pool, Their Community”