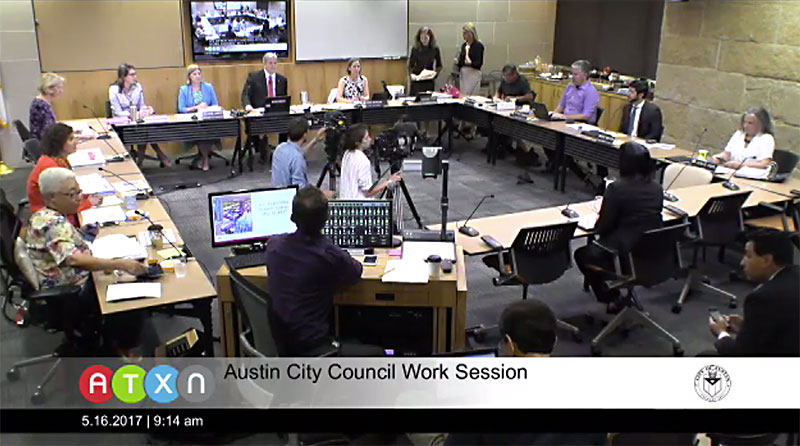 After a couple of fairly light weeks, City Council looks ready to plunge back into a fairly hefty agenda today, May 18: 70 Items that include sizable contracts, a dozen zoning cases, some potential revisions of Council procedures, and a likely debate over overtime funding at the Austin Fire Department. (With the next regular meeting not scheduled until June 8, a sense of desperation might descend around 10pm.)

Those matters will all take some time, but might well be overshadowed by the continuing argument with the Legislature over Senate Bill 4 – the anti-"sanctuary cities" bill (signed by Gov. Greg Abbott last week) that would sanction local jurisdictions deemed insufficiently cooperative with federal immigration enforcement. The law won't officially take effect until Sept. 1, but has already sparked widespread opposition (in the shadow of renewed federal immigration enforcement under the Trump admin­i­stra­tion), as well as fear among immigrant communities here and elsewhere. Several council members attended a Capitol rally Tuesday opposing the law, and Council Mem­ber Greg Casar will propose a resolution today (Item 45, co-sponsored by Mayor Steve Adler and CMs Delia Garza, Ann Kitchen, and Jimmy Flannigan) that would direct interim City Manager Elaine Hart to prepare whatever legal action is necessary to defend the city against SB 4's eventual enforcement.

Council passage is not in doubt (only Ellen Troxclair is likely to be strongly opposed), but what shape any legal action (plaintiff or defense) might take is yet to be determined. Attorney General Ken Paxton has pre-emptively sued the city and Travis County (and others), so the prospect is dueling lawsuits in dueling courts.

A bit of consequent media circus invaded Council on Tuesday morning, when an HBO team briefly stationed cameras in the center of the Boards and Commissions room, planning to film Casar (who's become a national face of the movement) in action. Not only Troxclair was annoyed at the intrusion (the small room doesn't really accommodate film crews); Mayor Adler groused about setting an awkward precedent, and an embarrassed Casar switched seats with Alison Alter to enable the filming to continue from a corner area.

That Item is tentatively scheduled for 7pm (to allow late witnesses) – Casar expressed a wan hope that there might be time for it earlier – but with this top-heavy agenda, that seems unlikely. Expect hortatory testimony, and perhaps another heated exchange between Casar and Troxclair. ("Robert Rules, OK?" Feb. 20)

Beyond SB 4, there is plenty of other gristle to chew in the substantial agenda. Notably, Flannigan and Alter are still pressing hard on the postponed proposal to move $3.5 million from the city's reserve fund to AFD (Item 12), the next installment to cover ongoing overtime burdens created by the Fire Department's inability to hire cadets swiftly enough to replace a lengthy and growing list of staff vacancies, now breaching 150. Flannigan has suggested returning to pre-2007 policy of less-than-four-person staffing on some responding fire equipment, without gaining much visible traction from his colleagues – and even if persuaded, AFD brass (on hand, including Chief Rhoda Mae Kerr at work session) said it would take until next summer to adapt to a reduced-staffing policy.

Alter says she wants fuller answers on how the department found itself in this predicament, although at work session Deputy Chief Financial Officer Ed Van Eenoo filled in some of the blanks – beginning in 2014, when a U.S. Department of Justice consent decree took effect to address racial discrimination in hiring. The exchange prompted a rare outburst from CM Pio Ren­teria, who not only reminded Council that the situation is a product of historical discrimination, but suggested that if the problem persists, "We need to take a closer look at department management." Today's meeting is unlikely to end the argument.

If that's not enough, the full day's work includes:

• Eye of the Beholder: The Economic Devel­opment Department proposes several art-related projects, for artwork at an Austin Energy Cooling Plant and at ABIA (Items 8-10), and an Art Space Assistance Program (Item 11). Some CMs occasionally grouse that artwork is too expensive or insufficiently local; the Space Assistance proposal caught flack Tuesday for being too little money for too few arts groups.

• Call to Order: Staff returns, as directed, with several proposals recommended to make Council (and other) meetings more efficient, and well, shorter (Items 14-15). On Tuesday, Council was reluctant to embrace anything that might shorten public testimony, however redundant. Perhaps they should have suggested to staff not to cram 70 or more contested Items onto one week's agenda.

• How Tall Is Too Tall? Item 18 would initiate code amendments to create a new Rosewood Park Capitol View Corridor, added to the 30 or more similar restrictions on tall buildings in the surrounding eye-line of the Capitol building, a purportedly sacred local vista. Not yet clear if this will obstruct Central Health redevelopment of the UMC-Brackenridge site: Better to look marvelous than feel marvelous?

• Hide the Price Tag: There are a more than the usual number of high-dollar contracts on the agenda, not surprising in content but rather daunting in combined scale. Among electric parts and supplies, ground maintenance, software and tech support, etc., are a couple of tree-trimming (power line-clearing) contracts that total (over five years) nearly $85 million. That's a lot of chain saws and cherry pickers.

Should they work their way through all that overbrush, there's a full slate of Citi­zen Communications, a dozen zoning cases (and the return of a Historic Land­mark Commission demolition appeal begun last week), and no less than 10 proclamations, e.g.: UTeach Natural Sciences Day, AIDS Candlelight Memorial Day, Emergency Medical Services Week, et al. The musical honoree is J.R. Gomez – expect a taste of conjunto.