Sine die looms. Do these bills have a shot? 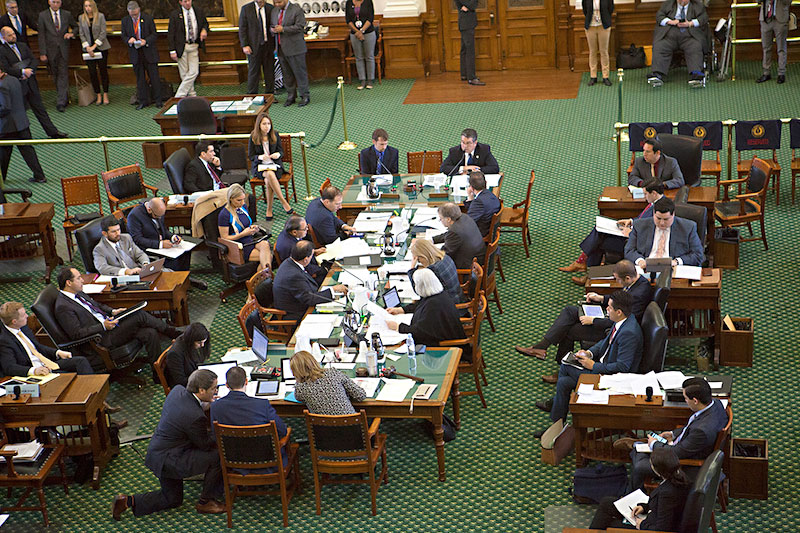 • On May 3, the House State Affairs Committee heard, but took no action on, an anti-choice bill that would ban abortion care coverage from all Texas insurance plans with no exception for rape, incest, or fetal anomalies. While HB 1113 by Rep. John Smithee, R-Amarillo, was left pending, its equally cruel Senate companion SB 20 passed the upper chamber in March and has been referred to House State Affairs Committee.

• Annual vehicle safety checks could be a thing of the past as the Senate approved SB 1588 by Sen. Don Huffines, R-Dallas. As the bill heads to the House, Huffines has still not explained where the state will find the $130 million in lost revenues from inspection fees.

• On May 5, the House State Affairs Committee advanced a bill that lets physicians conceal information about fetal abnormalities to pregnant patients without risking financial liability for the disabled child ("Bills Grant Texas Doctors Legal Cover to Mislead Pregnant Women," April 14). SB 25, which passed the Senate in March, could grant anti-choice doctors a license to lie to patients to prevent abortion.

• After two delays, the House took up HB 3859 on May 9. One of the most powerful religious liberty bills filed this session, HB 3859 would let child welfare providers deny foster care and adoption rights to queers, Muslims, Jews, and more, due to "religious" (read: bigoted Christian) beliefs. After several hours of debate, the House passed the bill, filed by Rep. James Frank, R-Wichita Falls, by a vote of 94-51.

• Also on May 9, the Senate approved (20-11) a bill written by a private prison company that would license family immigration detention centers as "child care facilities" in order to evade higher regulating standards and let ICE detain women and children for longer. The AP reported legislation similar to SB 1018 by Sens. Bryan Hughes and Charles Perry (author of anti-immigrant SB 4) was penned by the for-profit GEO Group, which oversees the Karnes County Residential Center. Democrats slammed the measure, calling the centers "baby jails," and pointing to the history of detention center abuse claims. Sen. Sylvia Garcia, D-Houston, criticized the lower standards the bill would engender. "What the heck is below minimum? Are we going to make them into concentration camps?" asked an incredulous Garcia. The Senate accepted the bill on third reading Wednesday, May 10; it now moves to the House.