Council: Day of the Robots 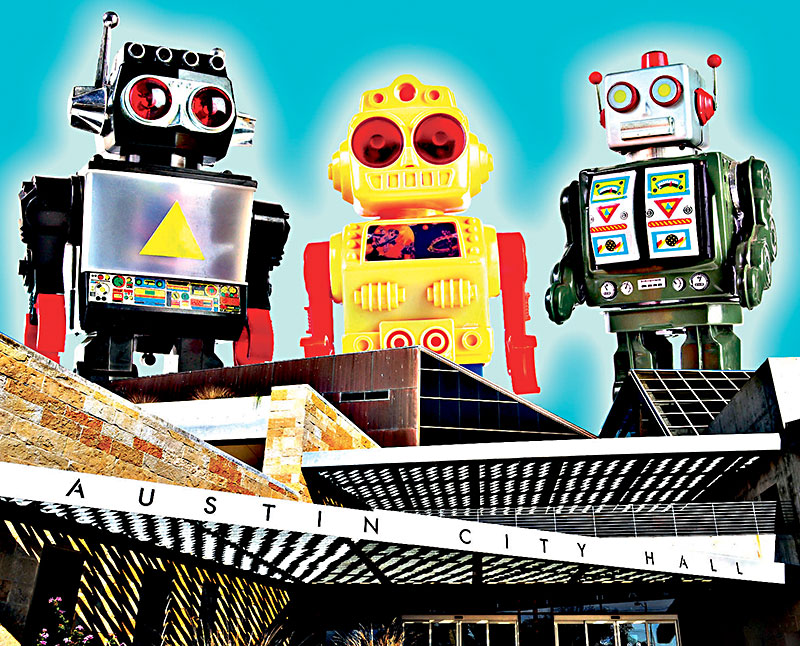 Council watchers were undoubtedly disappointed when the proposed pilot project for "last-mile" autonomous delivery robots was pulled from the April 20 agenda, due to inadequate posting language – i.e., not using the word "robot." They'll be delighted to learn that omission has been remedied on today's agenda (May 4) – Item 39 duly acknowledges "sustainable robotic delivery devices," and asks staff to return by June 30 with a recommendation on the Starship Technologies proposal.

If that's not enough, the agenda provides a double dose of robots. The Austin Police Department wants to upgrade its bomb disposal robots, by buying a spanking new $303,000 Andros FX from Remotec (a division of Northrop Grumman). The purchasing backup explains that APD is a devoted Andros customer (prior tools, parts, and training investment of $575,000), and that its four-robot mini-platoon is in danger of becoming breakdown-prone and obsolete. All but $4,085 of the $300 large will be underwritten by a state and federal Home­land Security grant. So we'd better get the money now, since those volatile folks in D.C. and at the Capitol might take a notion to yank any grant funds (or robots) that aren't being used to round up Central American refugees.

We’d better get the money now, since those folks in D.C. and at the Capitol might take a notion to yank any grant funds that aren’t being used to round up Central American refugees.

Other funds marked for appropriations include several tranches (Items 29-34) associated with the work-in-progress on the Mobility Bond, including funding targeted at specific mobility projects (sidewalks to superhighways) as well as beefing up the supporting staff charged with managing or monitoring the projects through the next eight years: seven new hires for Transporta­tion, five for Public Works, seven for Finan­cial Services (somebody has to keep track of the cash flow), and two for Small and Minority Business Resources. The biggest ticket (Item 33, $46 million) is for the projected work on the Loop 360 corridor.

One of the ongoing vexed questions for this year's budget development will be what to do about continuing budget overruns in the Austin Fire Department, mostly due to having to cover with overtime for the lengthy delay in hiring new cadets (another long story, e.g.: "The Color of Fire," May 13, 2011). Items 4 and 5 would add a lieutenant line to the current brass at AFD, although it's a specific-purpose post for fire inspections at the airport, and the cost would be offset from ABIA enterprise funds. Now if only the airport could pick up the tab for all that overtime ….

We won't hear the details, but among several items posted for executive session is a discussion of an Open Meetings Act violation claimed by the Northwest Hills folks fighting an apartment project on the Champions Tract. Arguing that the final approval vote (7-4) on the zoning change enabling the project (Nov. 10) was inadequately posted, they've demanded that the matter be reposted and returned to the dais, or the city can expect a lawsuit. District 10 Council Member Alison Alter has since succeeded Sheri Gallo – in part on the strength of Alter's anti-development sentiment. Gallo did vote no on third reading – so it's not clear if another vote would change the outcome. But it wouldn't be Austin if we weren't arguing over the Champions Tract ….

Also on the agenda for Thursday:

• How Ya Doing?: Who doesn't love an annual performance review? Executive session staff and salary reviews are due for the City Auditor, City Clerk, Municipal Court Clerk, and City Manager. Executive session might last a while.

• Meters 'R' Us: When the contract was first posted covering the next five years of electric and water utility meters, for a potential total of $17.5 million (Item 26), council members had questions ranging from "I thought we were computerizing all this stuff" to "Just how accurate will they be?" (reliabilities guaranteed in the contracts have been subject to periodic residential complaints). Expect at least some of those answers today.

• Rail at Fourth: Item 28 is an interlocal agreement with Capital Metro for a public plaza and permanent Downtown rail station on Fourth Street between Red River and Trinity. The city's contribution to the necessary infrastructure and improvements would be $3 million, plus the costs of closing Fourth Street to cars, and converting Fifth Street to two-way traffic.

• Yeti's Front Porch: The South Central Waterfront Plan proposed a public plaza for the weird triangle of land at South Congress and Barton Springs (you know, that impossibly angled right turn beside what the ordinance calls "bat statue island"). Item 41 would create a pilot project to design and implement a plaza, via a yet-to-be-identified "Participant" willing to design and use the space (nothing commercial other than food and drink). Even the name is "Temporary Plaza": It should be a perfect spot to kibitz with stalled commuters during rush hour.

Plenty of proclamations, including: Mot­or­cycle Safety and Awareness Month, Child­ren's Mental Health Awareness Day, Digital Inclusion Week, and the 70th Birthday Month of the Barton Springs Bathhouse (doesn't look a day over 69). The musical honoree will feature the unforgettable eloquence of Ashley Borrero.