Bill of the Week: Baby, You’re a Firework

Texas doesn't like regulating firearms sales, which makes its limitations on when you can pick up a few firecrackers all the more surprising. There's actually a very short list of holidays around which fireworks vendors can operate: New Year's Day, Fourth of July, and Cinco de Mayo, plus Texas Independence Day, San Jacinto Day, and Memorial Day, which were only added last year. HB 1417 is one of three bills proposing extra dates on the Roman Candle calendar. Reflecting Texas' rapidly growing Asian population, Rinaldi wants Diwali – the festival of lights celebrated by Hindus, Sikhs, and Jainists – added to the list. Meanwhile Rep. James White, R-Hillister, has HB 41 and HB 554, adding Juneteenth and Labor Day, respectively. In a sign of the Legislature's love of all things combustible, all three bills are out of committee and headed to the House floor.

Bill of the Week: This Bill’s for You
Rep. Craig Goldman serves up a new round of beer-based tax 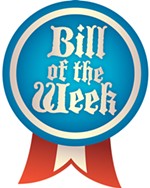 Bill of the Week: Click It, Kids
Who here wants to argue about the positive effects of seat belts?