Point Austin: On the Backs of Immigrants

In the war over “sanctuary,” the victims are most vulnerable

In the wake of word out of the U.S. Department of Justice that Austin and Travis County are in fact complying with federal immigration laws, it didn't take long for Gov. Greg Abbott to wave the bloody shirt. As the Texas House was about to debate a pet project of Abbott's – Senate Bill 4, a grandstanding effort to crack down on "sanctuary cities" – Abbott's office issued a statement: "Unlike the mayor and the Travis County Sheriff, the governor believes that releasing violent and dangerous criminal aliens back into our communities once they have had an ICE detainer placed on them is unacceptable. That's why Texas will pass a law to require counties to comply with ICE detainer requests. It's the governor's belief that Travis County is refusing to live up to this common-sense safety standard."

Abbott was responding to Mayor Steve Adler's report of conversations with Attorney General Jeff Sessions and Thomas Homan, acting director of the Immigration and Cus­toms Enforcement Agency. During meetings with a delegation of the U.S. Confer­ence of Mayors, Sessions and Homan told the mayors that the policies currently practiced in Austin and Travis County – no requirement that police officers inquire about immigration status, and case-by-case consideration of ICE "detainer requests" – do not violate federal law. Abbott's response was both hysterical and false: Despite all the sensational headlines, Sheriff Sally Hernan­dez does not "release violent and dangerous criminal aliens back into our communities." Abbott's response was actually mild compared to that of the White House, which seethed, "San Francisco, and cities like it, are putting the well-being of criminal aliens before the safety of our citizens, and those city officials who authored these policies have the blood of dead Americans on their hands." That accusation was specifically in response to a ruling by U.S. District Judge William Orrick enjoining President Trump's threats to withhold federal grants from local jurisdictions the DOJ deems noncooperative on immigration enforcement. "Federal funding that bears no meaningful relationship to immigration enforcement," wrote Orrick, "cannot be threatened merely because a jurisdiction chooses an immigration enforcement strategy of which the President disapproves."

Austin is indirectly involved in the lawsuit, having filed supporting briefs to the positions of plaintiffs San Francisco and Santa Clara County. Curiously, neither of those jurisdictions were among the nine addressed in an April 21 letter from Sessions, asking officials to provide proof they are complying with 8 U.S.C. 1373, the federal law that requires local jurisdictions to exchange information regarding arrested immigrants. That's the only section of the law cited by the DOJ as potentially triggering sanctions – as it was even in the ranting press release from the White House – and no one has even accused Austin and Travis County of violating that provision, because such information exchanges among TCSO, FBI, and ICE are in fact routine.

Instead, what we get from the White House and the Capitol are hysterical denunciations of imaginary criminal gangs terrorizing otherwise quiet neighborhoods because local officials are unlocking the jail cells. It's certainly of a piece with the American dystopia persistently fantasized by Donald Trump, and the fact that it fails to correspond with actual reality has apparently had little effect on the frenzy of his supporters.

Abbott and his Republican majority at the Legislature are well aware of that frenzy, which is why no amount of counter-information from the mayors who actually deal with these issues every day will have much impact on the pending "anti-sanctuary" legislation there. Like Trump's imperial border wall, it is an expensive, absurd solution to a manufactured, imaginary crisis. Like so much of our contemporary politics, the war is being fought on a symbolic battleground, but over the bodies of real people, in this case immigrants whose lack of "papers" – official documentation of their God-given but only state-permitted right to live their lives in peace – makes them subject to random, arbitrary arrest and deportation.

I asked Mayor Adler if his discussions in D.C. could bring any comfort to immigrant Austinites who have learned since January that their lives and families are even more precarious than they were under Barack Obama. He said he hopes so, and that perhaps it will also give pause to state legislators who are determined to out-fed the feds themselves on immigration enforcement (while of course providing no new funding for the additional burdens they would be imposing on cities and counties).

But SB 4 is neither about law nor real public safety. It's about politics, and on passage it will likely enter the same judicial maelstrom that greeted Republican imposition of unconstitutional congressional and legislative district maps. After years of litigation, the rulings of unconstitutionality will be too little and too late to restore families torn apart and lives ruined by arbitrary and capricious deportation. That's a small price to pay for another decade of white supremacy. 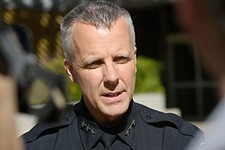 Lege Lines: The “Sanctuary Cities” Bill's Detrimental Effect
Can anyone reasonably testify in favor of SB 4?