Council: No Sanctuary for the Weary

There's no regular City Council meeting this week (the next is May 4), although council members and city staff will not be lacking for things to do. The city budget season has begun in earnest – last Wednesday featured the five-year financial forecast and early budget preview – and Wednesday's work session (April 26) began to dig deeper into the departmental maelstrom to determine where this year's rubber will meet the road. (See "Council: It's Always Something," April 21.)

Before they ever get down to that, City Hall will be receiving the reverberations of Mayor Steve Adler's impromptu visit to D.C., where he joined a delegation of the U.S. Conference of Mayors, meeting Attorney General Jeff Sessions in another attempt to clarify the Trump administration's definition of "sanctuary cities." Last month, a similar meeting with Secretary of Homeland Security John Kelly resulted in photo ops and a bland Kelly reassurance that his agency is only interested in apprehending "dangerous criminals." ("No Sanctuary," March 30.) Then, last Friday (April 21), Sessions sent dunning letters to nine jurisdictions – Chicago, New Orleans, Philadelphia, Las Vegas, Miami, Milwaukee, New York City, Cook County (Illinois), and the California Department of Corrections and Rehabilitation – requesting proof that the relevant officials are sharing relevant information with immigration authorities. (In a press release, Sessions took a few slanderous shots at the cities, accusing them of ignoring or even promoting crime.)

Neither Austin nor Travis County was on the list, but Sessions' letter – and the explicit threat to withhold federal grant money from any jurisdiction deemed non-cooperative – raised alarm here as elsewhere. In a statement released Monday, Adler wrote: "Surprisingly, it seems most people think a 'sanctuary city' is one where police protect criminals by refusing to enforce federal immigration laws. I'm not sure there are such cities, and certainly Austin is not one. We follow the law and want criminals in jail, not on our streets."

Following meetings with Acting Immi­gra­tion and Customs Enforcement Agency Director Thomas Homan and AG Sessions, Adler told the Chronicle that he was assured that neither Austin nor Travis County are violating federal law, and that local police officers are not mandated to inquire about immigration status nor to participate in federal immigration enforcement actions. He hoped that might bring some encouragement to undocumented immigrants who fear that cooperating with police officers or engaging city services will leave them subject to arrest and deportation. ("What Is a 'Sanctionable City'?" April 25.)

Adler and other local Texas officials are also waiting for the other shoe to fall at the Legislature, in the form of Senate Bill 4, which purports to outlaw "sanctuary cities" and threatens to sanction local jurisdictions which fail to fully comply – as defined in the bill – with immigration enforcement. Adler said that in light of statements by Sessions and Homan, the Legislature is threatening to go far beyond what federal law actually requires, and instead would mandate local police to assume federal responsibilities to enforce immigration laws.

The shadow of the bill has already disrupted business at City Hall, where negotiations toward a new "meet-and-confer" agreement with the Austin Police Assoc­ia­tion have been suspended pending legislative action. Adler expressed his frustration at the prospects: "Our officers simply don't have the time or resources to enforce immigration laws any more than they have the capacity to act as IRS agents, USDA inspectors, or game wardens."

The issue – with substantial financial as well as political implications – was raised last week, following a seemingly anodyne Council briefing provided by the city's Labor Relations Office, on public safety union contracts. Witnesses following the briefing – primarily from activist groups demanding better police transparency and accountability – accused the police force of officially denying they cooperate with ICE while in fact doing so surreptitiously. APD brass has repeatedly denied the charge – echoing Mayor Adler's insistence that "our police focus on keeping people safe regardless of where they come from or how they got here."

But recent ICE raids locally – followed by evidence that they were at least partially in retaliation for the new policy of Travis County Sheriff Sally Hernandez of only limited cooperation with ICE "detainer requests" – have undermined local law enforcement assurances that undocumented immigrants can report crimes (or use city and county services) without fear of deportation. "Asking local police to appear as federal immigration agents," says Adler, "destroys trust."

That's only one of the issues overshadowing the upcoming budget deliberations, which began with a financial forecast that predicted a cooling economy, followed by an early budget preview reflecting tight numbers and difficult decisions to come. Budget staff annotated roughly $48 million in structural "cost drivers" (ranging from rising personnel costs to continued funding for CodeNEXT) for which new spending will likely be necessary – over and above the $970.6 million allocated for this year (FY 2017). For FY 2018, that doesn't include another $5 million in one-time items that Council did manage to fund to one degree or another this year: Austin ISD support, Quality of Life initiatives, affordable housing programs.

Where does public safety, and specifically APD, fit into that matrix? Public safety currently consumes just under 68% of the Gen­eral Fund (operating) budget, with APD alone at about 40%; Mayor Adler suggested last week that one step might involve imposing a percentage cap on total public safety spending. Several witnesses suggested freezing the APD budget and shifting more funds toward social service spending. Among those demanding stronger police accountability, that's a common position. But among Austinites more generally (via annual city surveys), public safety spending ranks as a very high priority.

Should the Legislature follow through and impose immigration responsibilities on local law enforcement, it's likely to generate additional pressure for more – and more highly paid – cops. That's one more headache facing council members as they enter budget season. 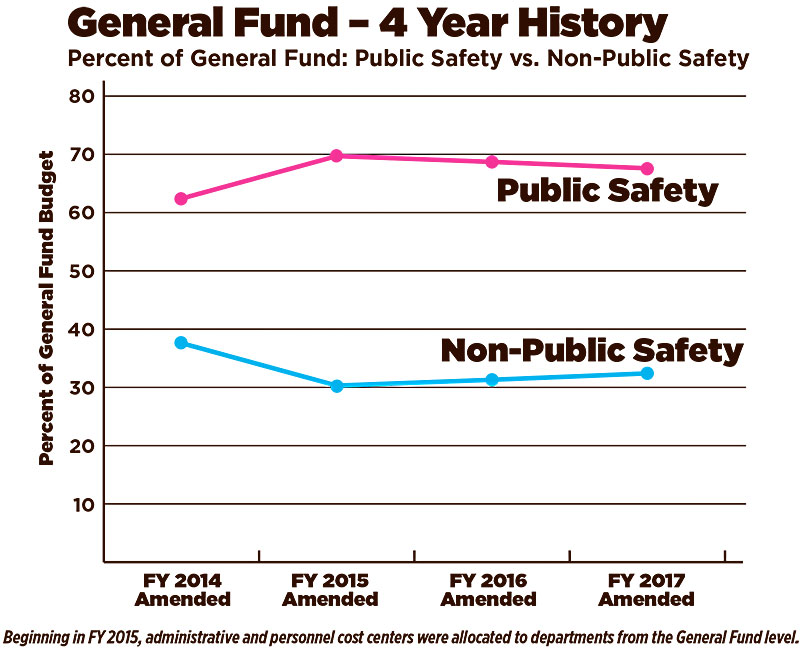