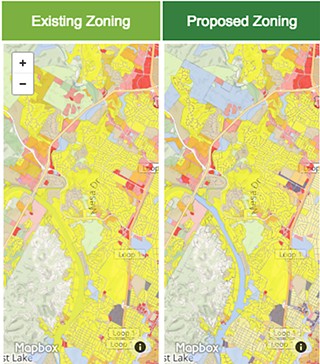 Staff and consultants presented the long-awaited CodeNEXT draft zoning map on Tuesday, showing exactly where in town they envision applying the new zoning categories they released back in January – and conversely, letting every Austin property owner see exactly what new zoning code might apply to their home or business.

Not that the interest was limited to property owners, of course. The mapping was presented at a City Council work session Tues­day morning; by the time it came back to a joint meeting of the Planning and Zoning & Platting Commissions that evening, speakers were ready with predictable talking points. Those will be repeated to your heart's content, but if you remain agnostic – or perhaps feel, in the words of a certain council mem­ber who shall remain unnamed here: "I don't really understand what you just said, as with most of this presentation, frankly" – here are a few key points to know:

The Mapping: It's pretty cool, actually. Go to codenext.engagingplans.org and see exactly what any tract in the city is currently zoned, side-by-side with the new proposed zoning, and leave comments. Staff is working on refinements, and has released the GIS code so that clever folks around town are already concocting elaborations.

Transect vs. Non-Transect: To simplify matters, the code drafters have chosen to replace the existing code with not one, but two entirely different sets of new zoning categories – Transect (form-based) and Non-Transect (use-based) – used in different parts of town, but also mixed in with each other in many areas. Why? See footnote.

Form-based vs. Use-based: The biggest change in the new Transect-based zoning is that the regulations are primarily form-based, controlling the shape and scale of the buildings on a property, rather than the uses. There's no more commercial zoning, for example; some commercial uses are permitted in almost all the new Transect categories. Form-based zoning differentiates instead by density – T3 Neighborhood through T6 Urban Core – and envisions a city where warehouse buildings can become lofts, or stores can open in what used to be houses, without it being a zoning issue. Our current code, and the new Non-Tran­sect code, are both use-based, in that they define zones primarily by what uses are permitted there, and are almost existentially split into residential and commercial.

Evolution, or Revolu­tion? Staff and consultants have repeatedly stressed (and did so again Tuesday) that the new code and mapping are not intended to change policy, but primarily reflect the current zoning and policy direction. Still ... CM Kathie Tovo, noting how much current single-family in her district is going to T4 (primarily multifamily), concluded: "There are points of real divergence from the existing adopted neighborhood plans on the ground." Meanwhile ...

Accessory Dwelling Units are permitted in all of the Transect zones – where they're generally allowed already – but also in most Non-Transect categories as well – where they are currently not allowed. Wide swaths of West Austin SF-2 that were specifically and controversially exempted from 2015's ADU ordinance, will be allowed to have (forced to accept?) ADUs under the new regs – they're allowed everywhere but RR (rural) and VLDR (very low density residential). Duplexes, however, will still be banned there.

Still to come: Even as the advocates on all sides start to dig into the details of the zoning maps, there are major parts missing. The flooding impact modeling is only now beginning with the mapping release; there's no date yet for when that might be done, but the Watershed Protection Depart­ment has indicated it won't be until the end of summer – well after the comment period has ended and about when the next draft of the code is expected to be finished and delivered to the Boards and Commissions. There's no demolition analysis yet on the horizon either – no projection of the loss of existing "market-affordable" housing. Nor is the plan for density bonuses and affordable housing incentives yet ready; those were supposed to be out the day before the mapping release, but are now expected "in the May timeline." But an early guesstimate was not encouraging: Staff opined that incentives might create 1,400 affordable units under this plan, painfully short of the 60,000 Council just set as a goal for "income-accessible" units needed. And that doesn't even count all those units being torn down. But ...

Housing Numbers are Huuuge! With Council having just passed a housing plan that calls for 135,000 new units in the next 10 years, the CodeNEXT presenters complied, with a projection that the new code could facilitate a net increase of some 144,000 new units across the city. (But of course, it was estimated a few years ago that the current zoning in the city could accommodate a doubling of the population, or something like 300,000 new units – as always, it's not just a case of, "If you zone it, they will build.")

The Elusive Mix: Ora Houston, on behalf of her beleaguered Eastside District 1, asked the hardest question of the day: We always say we want a mix of housing in each neighborhood, but when we take a neighborhood like hers, that already has that mix of housing in a patchwork of zoning, and then we go in and rezone it all, so that every parcel can be redeveloped to any density, won't it all get redeveloped to the maximum density, so that it will no longer have a mix of housing? There being no answer, the discussion moved on.

Quote of the Week: Commissioner Betsy Greenberg, noting that there are areas of current SF-3 all over the city, of which some are mapped to stay the same, and some are designated to be various zones all the way up to T5 Urban: "How do you choose which neighborhoods to send the bulldozers to?"

Meetings: Staff has set up a new series of mapping information sessions, by council district, starting this week, for residents to "understand the implications of the code as it is mapped in each district." These are in addition to the ongoing Topic Talks, with Affordability, Mobil­ity, and Permitting & Pro­cess still to come in May and June. Here's the schedule for this month; see oh-so-much more at www.austintexas.gov/codenext.

The Earth Day ATX festival is this Saturday, April 22, noon-7pm, at Huston-Tillotson University. And among all the other events and activities on offer, the Austin Transportation Department will have a pavilion showing off, and taking feedback on, several initiatives, including their Active Transportation and Street Design Division, Austin Strategic Mobility Plan, and Air Quality Program, with an emphasis on how mobility choices impact the environment. Other exhibitors will offer tips and resources for "walking, biking, transit, car sharing, ride sharing, carpooling and/or vanpooling." See more about the event at www.earthdayaustin.com.

Looking for more Earth Day doings? The Austin Sierra Club has rounded up a selection of activities for the weekend, April 20-22. See details and more events: www.sierraclub.org/texas/austin/outings-information.

• Saturday, 9am: Service outing at the Audubon Baker Sanctuary in Leander

Also celebrating Earth Day: Professors from the UT System published a letter Wednesday, signed by more than 140 members of faculty across seven UT campuses, urging UT Chancellor Bill McRaven to reduce climate-damaging methane emissions from oil and gas facilities on land administered by the UT System through University Lands. The letter ran as a full-page ad in The Daily Texan, saying, among other things, that "between 2009 [and] 2014, more than 344,000 metric tons of methane escaped from oil production facilities on UL land. When converted to CO2e, ... [it] could exceed 1.95 million metric tons in any given year – more than seven times the total annual climate impact of the entire UT-Austin campus."

4/20: Tax Hemp! The Texas Hemp Campaign is having a Tax Hemp Demonstration and Banner Drop on Thursday, April 20, at 4:20pm on the 11th Street overpass of I-35, and in San Antonio on the Main Street overpass of I-35. Noting that hemp/marijuana is already the No. 6 cash crop in Texas, THC "encourages all Texans to write, call or visit elected officials and tell them the truth about hemp/marijuana and to support HB 81 ... which legalizes marijuana possession up to 1 ounce and reduces penalties for marijuana possession above that." See more info at www.texashempcampaign.com.

Holiday weekend! With spring in the air, folks' thoughts naturally turn to tornado and flood preparedness. Fortunately, on April 22-24 we celebrate a sales tax holiday for emergency preparation supplies: Buy as many batteries, hurricane shutters, emergency ladders, and portable generators as you need, and pay no sales tax at all. Sorry, car batteries, chainsaws, plywood, and camping supplies don't qualify. See www.comptroller.texas.gov/taxes/publications/98-1017.php for the full list.