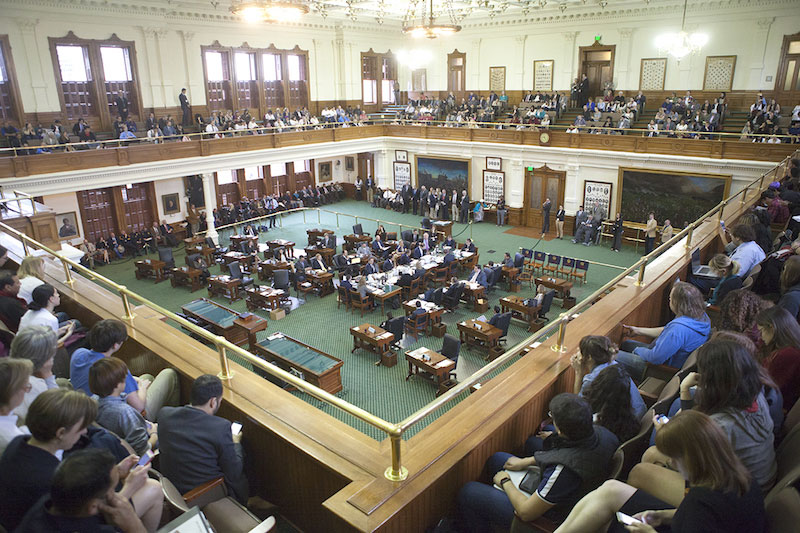 Budget shenanigans continue as House leadership calls on Attorney General Ken Paxton to intervene. Lawyers for Speaker Joe Straus and House Appropri­a­tions Committee Chair John Zerwas, R-Richmond, requested an AG ruling this week on the Senate's proposal to withhold $2.5 billion from highway spending so senators can balance this year's books. The House has rejected this plan, contending that, since voters dedicated that cash to transportation in 2014, the Senate accounting trick violates the Texas Constitution. ... Rep. Ron Simmons, R-Carrollton, filed HB 2899 in March. Though the bill always intended to remove nondiscrimination laws from city ordinances, it has recently evolved into a "compromise" for SB 6, the "bathroom bill" – because Texas legislators can't stop copying North Carolina. HB 2899 is equally discriminatory. It negates all nondiscrimination protections not already covered by state or federal law, and – unlike SB 6 – removes any exceptions. It also bans any entity other than the state from putting bathroom protections into place, but does not stop lawmakers and businesses from banning bathroom access to trans folks. Gov. Greg Abbott reacted to HB 2899 by saying he was now officially eager to sign a bathroom bill. Ash Hall with Equality Texas said HB 2899 came forth "because SB 6 is less and less likely to pass. We need to make it clear that any 'compromise' on this issue is no compromise if it codifies discrimination." ... Two journalism-related bills drew unlikely allies during a House State Affairs Committee hearing last week. HB 3388, by Rep. Ken King, R-Canadian, would prevent journalists who have participated in or donated to political campaigns in the past five years from certain protections (like revealing sources in court), while his HB 3387 would make it harder for news outlets to defend against libel suits. King said his bills weren't meant to dilute press freedom, but rather to regulate those who "buy themselves an iPad and call themselves a journalist," a likely reference to Empower Texans, a conservative PAC/media publication hybrid that goes after lawmakers seen as too moderate. But it wasn't just Empower who testified against the legislation – media professors and journalism organizations, including the Texas Press Association and Freedom of Information Founda­tion of Texas opposed the bills, saying they would thwart free speech rights and cause a chilling effect among reporters. The bills were left pending in committee.

Long overdue recognition! The Texas Parents' Educa­tional Rights Network this week named Austin Cham­ber of Commerce VP Drew Scheberle their Jerk of the Week for his "amazing show of arrogance, snobbery and general jackassery" in being the only speaker at the Senate Education Committee to speak against SB 463, which would make permanent the very successful Individual Graduation Committees which are empow­ered to let students who fail one or two end-of-course STAAR exams graduate with their class if they meet all other criteria and apply to the committee with a project or portfolio of work. Scheberle, a longtime booster of standardized testing, said specifically that he couldn't support giving a diploma to a student who failed one STAAR test, but has gone on to post a 3.6 GPA in college.