Hearing on Gerrymandering Set for April 27

Breadth of congressional redistricting on the agenda 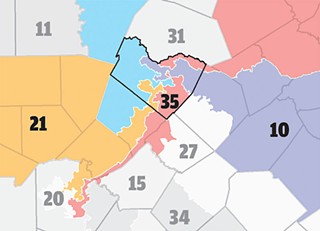 Judges will hear arguments next week on how to fix Texas' gerrymandered congressional districts. The hearing, scheduled for April 27 before the 5th Circuit Court of Appeals, follows from a March 10 ruling that three congressional districts, as drawn by state reps in the 2011 redistricting, violate the Voting Rights Act. They are: the massive Congressional District 23 in West Texas, held by Republican Will Hurd: CD 27, which stretches from Lockhart to the coast, and is currently held by Republican Blake Farenthold; and CD 35, held by Democrat Lloyd Doggett, which stretches from Austin, along I-35, and into eastern San Antonio. Texas is already using interim maps drawn in 2013, which were redrawn at the time because of VRA violations around Dallas. The question now is whether the court can come up with a fix that simply redraws the lines between those three contiguous districts from the latest ruling, or whether compliance with the VRA will require a wholesale redrawing of the entire state map. And lawmakers are bracing themselves for the very real possibility that the court could order them to fix the maps before the 2018 election, inevitably requiring a special legislative session.

A version of this article appeared in print on April 21, 2017 with the headline: The Gerrymander Writhes Again