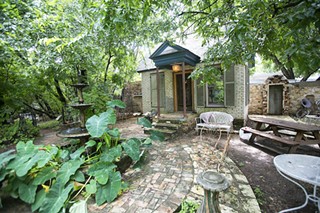 The grounds of Sekrit Theater (Photo by Jana Birchum)

Early last month Beau Reichert, the owner of East Austin's Sekrit Theater, put the two acres on which his artist's retreat sits up for sale – hiring Austin Music Realty to find an owner who will treasure and preserve in some form what he has created on the property. In a March 28 Facebook post, Reichert explained that he was selling the home he spent 10 years painstakingly crafting by hand – from a ramshackle property into a creative hub with an international following – because the attention and ensuing conflict with neighbors over issues such as noise and parking had proved too exhausting for him to continue. He told the Chronicle he's itching to find a new space for a new project. Reichert stands to make a substantial profit; the current asking price is $3.5 million, which AMR attributes to the value of the land and the presence of the various structures Reichert built over the last decade. The Travis Central Appraisal District lists the market value at $530,000. Reichert declined to say how much he paid for the property in 2008, but AMR noted: "Tax valuation is based on what he paid for [it] 10 years ago, and the market has skyrocketed since then."

"We consider this property to be a work of art," said AMR's Don Harvey, who stressed that the lot isn't "encumbered," but simply in need of the right buyer. (Corridor Title Co. is helping AMR with the sale.) "It's precious to Austin. We want to preserve it. We're looking for a buyer that sees the value in what it is, sees it for what it is, and falls in love with it. That's the goal."

Reichert has asked that anyone with memories of the art projects, charity events, birthday parties, and movie screenings that took place at the Sekrit Theater write a letter about them so that the new buyer understands "how special the Sekrit Theater is and how important it is to all of you. … I just want to pass on what I started to someone else who wants to take care of the project and expand on it."

Photos and listing details, including permitted uses, are available at www.austinssecret.com. 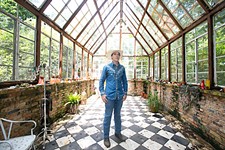