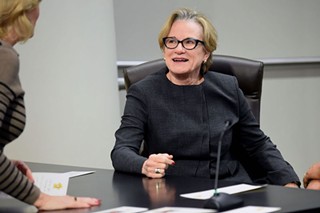 The officers involved in Friday's shooting of Lawrence Parrish (see "Officer-Involved Shootout?") have been placed on administrative leave while Internal Affairs and the APD's Special Investigations Unit complete separate probes into the incident – the former to determine whether the officers violated any departmental policies and the latter to consider whether the officers' actions could rise to the level of a criminal offense. Previously, under former Travis County District Attorney Rosemary Lehmberg, any critical incident would be presented to a grand jury for consideration of a possible indictment, but that will no longer be the case. On Wednesday, current D.A. Margaret Moore made public her plans to revamp the Critical Incident Unit (which investigated all critical incidents) as the Civil Rights Division, a more robust division, overseen by Assistant D.A. Dexter Gilford, with fellow A.D.A.s Laurie Drymalla and John Lopez, that now encompasses both the Conviction Integrity Unit and a unit to consider prosecution for officer-involved shootings and other incidents involving law enforcement use of force.

In a Tuesday meeting at the Chronicle, Moore explained that the CRD will operate differently from Lehmberg's CIU in three top-level ways. First, the D.A. will use discretion in presenting incidents to the grand jury. In cases where Moore considers it obvious that the officer involved was acting within the law, she says she'll issue a declination, present case details to the public, and close the case without grand jury review. Second, in cases where Moore's office does take a critical incident to a grand jury, Gilford's team will present the case to a specially assembled grand jury – one that only hears cases involving use of force or other potential violations of an individual's civil rights. Gilford said he plans to practice voir dire, or preliminary examination of jurors, a rarity with grand juries, and that all selected jurors will undergo an orientation process wherein they learn about the basics of critical incidents from both veterans of law enforcement agencies and influential community members. Prose­cutors will also now issue recommendations in these cases, something Moore said the D.A.'s office used to do when she was an A.D.A. under Ronnie Earle but discontinued at some point during Earle's lengthy tenure. Moore said she hopes the changes will help expedite the currently lethargic pace at which critical incidents are investigated and vetted, and increase the public's perception of independence between the D.A.'s office and the county's various law enforcement agencies.