Pease Park Before the Flood 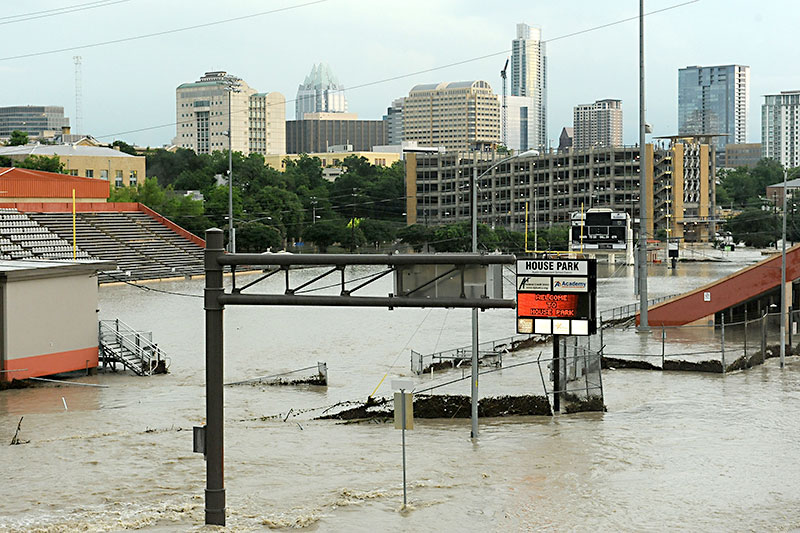 Concerned residents armed with copies of a 19th century City Council resolution are mobilizing to protect Pease Park from what is otherwise an effort to put a stop to catastrophic flooding along Shoal Creek in Downtown Austin.

On its face, the idea seems like a slam dunk, especially given the deadly history of flooding along the Downtown waterway. On Memorial Day in 1981, the creek earned infamy when raging waters swept 13 people to their deaths. More recent floods have fallen short in terms of body count, but their toll on businesses along North Lamar have been quite heavy. But the effort to permanently protect the 75 residential and commercial buildings at risk from Shoal Creek's punishing floods has put the fate of Pease Park, which snakes along the central segment of the 11-mile waterway, into potential jeopardy. To quote Andrew Gill, of the nonprofit Pease Park Conservancy: "We have a few Pease heirs that are supporters and contributors to the conservancy. They want to see the park to continue to function in the way that former Gov. Elisha Pease had intended. So they're paying attention to the conversation."

Gill's group is alarmed because the initial funding request for the $900,000 flood mitigation study prioritized a 1991 Army Corps of Engineers survey of Shoal Creek that recommended installing a subterranean tunnel to safely flush floodwaters beneath Downtown and into the lake. The city has been working since 2011 to build a similar system along Shoal Creek's eastern counterpart, Waller Creek.

The hitch, as Gill sees it, is that Pease Park could suffer the same fate as Waterloo Park, which has been closed for years while crews construct the Waller Creek Tunnel's massive inlet facility to collect, clean, and store creekwater. Installing a similar creek commode at Pease Park could potentially violate a pair of commitments City Council made generations ago, Gill argues – and he has the historical records to support that claim.

During the March 9 open house that marked the public launch of the flood mitigation study, Gill manned a PPC information table and passed out copies of a Council resolution dated Aug. 25, 1875. The document is the covenant by which the city accepted Gov. Pease's donation of the acreage that would become the southern section of his namesake park. The agreement, handwritten in an almost impossible-to-decipher Reconstruction Era script, stipulates: "This gift and donation is made upon the condition that it shall never be used or appropriated for any other purpose than as a public park and pleasure ground."

Should the city ever renege on the deal in any way, the resolution goes on to declare, the land reverts back to the private hands of the Pease estate. Other records show that the city made a similar pledge in 1929 when it purchased the northern half of Pease Park from a private developer. Both documents have been used in the past to block a proposed school and a crosstown highway.

"Any recommendation that includes a flood bypass tunnel in Pease Park, we would be vehemently opposed to it," Gill said.

His firm stance has allowed just a hint of daylight between the otherwise peas-and-carrots PPC and the Shoal Creek Con­serv­ancy, the group dedicated to restoring and enhancing the creek itself. "Maybe where we differ is perhaps there's something that could work out that would enhance the park in the process," speculated SCC Executive Director Joanna Wolaver. "Where it's not like a Waterloo Park type of situation, but it's a retention system underneath the park where you wouldn't even see it."

Wolaver acknowledged that an obtrusive inlet facility in the park would be a political non-starter, not leastly because her own group opposes the "alienation of parkland." Both Wolaver and Gill emphatically dismissed any notion of drama between their two groups, and Gill also praised the city for its decision to expand the scope of the study to include options beyond the Corps of Engineers survey's recommendation.

Michael Moya of Halff Associates, the city's consultant on the study, explained that the two typical solutions for flood mitigation – upstream storage and downstream capacity – by themselves are impractical in this case due to a lack of real estate.

"They're weighing a lot of different interests," Gill said.

One of those interests is the profound sense of protectionism for one of the original diadems of the city's parks system. That was made evident at the March 9 open house, when many residents clutched copies of the 1875 resolution in one hand while buttonholing Watershed Protection staff with the other.

Said Gill, "We're not threatening lawsuits, but if we were on our last option with no other way to go, certainly we would try to protect Pease Park and save it as we know Pease Park today."

Rush to Judgment: CodeNEXT 1.0 out Now
Draft now out, it's time for some hot opinions