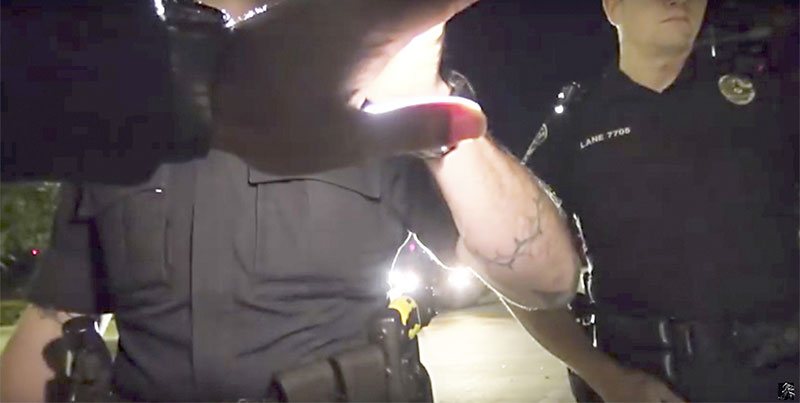 A screenshot from the video Turner posted on YouTube

Two APD officers were suspended late last week for their attempts to impede the video recording efforts by one Phillip Turner – "The Battousai" – a notorious cop watcher in Central Texas. Four-year vet James Mau­frais got 20 days, and Jesse Lane (with the department three years) received 10. Chief Brian Manley concluded that the two violated a series of departmental policies relating to professional decorum and interacting with the community. The suspensions stem from a Novem­ber incident in which Maufrais and Lane arrived at a traffic stop to provide backup to a third officer, but got diverted by Turner's recording, taking place nearby. Maufrais approached Turner and shined a flashlight into the camera. When Turner produced a second camera, Maufrais brandished a second flashlight, again shining it on the lens. Lane joined the back-and-forth; the three engaged in an "adversarial exchange." Maufrais told Turner to scram, but Turner, recognizing his lawful right to record police activity from a safe distance, refused. The two officers continued to obstruct his view. Obviously, video of the incident made its way onto YouTube the next morning. Former Police Chief Art Acevedo said at the time that the officers’ actions demonstrated “self-inflicted stupidity.” Manley was a bit more fundamental in his memorandum.

A version of this article appeared in print on April 7, 2017 with the headline: The Battousai Strikes Again