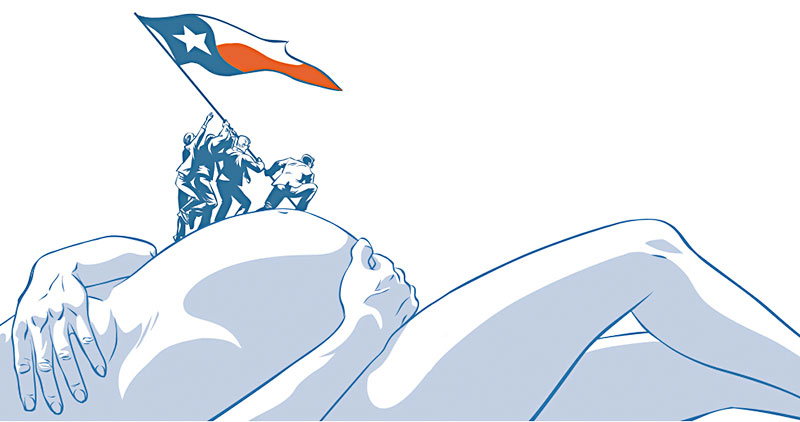 In an anti-choice bill frenzy over the past week, the Texas Senate passed a trio of abortion-restrictive pieces of legislation with little debate. The upper chamber gave final passage to SB 8 by Sen. Charles Schwert­ner, R-Georgetown, on March 15. The redundant bill bans "partial birth abortion," already illegal in the U.S., and prevents abortion patients from donating their fetal tissue for research, a provision Sen. Judith Zaf­fi­rini unsuccessfully sought to strike on the floor. On March 20, senators sped through SB 415 from Sen. Charles Perry, R-Lub­bock, who wants to ban dilation and evacuation (D&E), the safest and most common type of second-trimester abortion procedure. Prompted by Sen. Sylvia Garcia, D-Hous­ton, Perry admitted no medical groups supported his bill. He also seems aware his legislation met legal challenges in other states – similar laws in Oklahoma, Alabama, and Louisiana are all on hold. Sen. Kirk Watson, D-Austin, tried to amend the bill to let doctors perform the procedure if it's the safest avenue for women – that failed. Heather Busby of NARAL Pro-Choice Texas said SB 415 would "prevent doctors from using their best medical judgment when treating their patients and would put patients' health, safety, and lives at risk."

On Tuesday, the Senate also gave final approval to GOP Sen. Brandon Creighton's SB 25, meant to eliminate a patient's right to sue their doctor if the physician withholds information that relates to fetal abnormalities. In effect, say critics, the bill lets physicians lie to patients in an effort to prevent abortion. Creighton called the "wrongful birth" cause of action problematic and a detriment to attracting out-of-state physicians. Sen. José Rodrí­guez, D-El Paso, countered that both the Texas Medical Association and tort reform groups disagree with that claim and that wrongful birth suits are actually "rare." SB 25 is really about "limiting a woman's choice" when it comes to her pregnancy, said Rodríguez. The trio of bills now move to the House for consideration.

And finally, on Wednesday, the Senate sailed through SB 20 by Sen. Larry Taylor, R-Friendswood, which would bar insurance plans from covering abortion care (with no carve-outs for rape, incest, or fetal anomalies). Residents would be forced to buy supplemental coverage, somehow anticipating a need for an unexpected medical procedure. SB 20 still needs a third approval before moving to the House.

Whole Woman's Health's flagship abortion clinic in North Austin plans to reopen this April after closing its doors in the wake of 2013's anti-choice House Bill 2. The clinic will offer comprehensive women's health services, including annual exams, birth control, and emergency contraception. "Whole Woman's Health got our start here [in Austin], and I am thrilled to announce that we will take the first step, with our flagship clinic reopening, to restore the fabric of care across our state that Texans have come to count on," said Amy Hagstrom Miller, president and CEO of WWH. The abortion provider is the first to reopen since the U.S. Supreme Court's decision ruled parts of HB 2 unconstitutional last June. The historic case, Whole Woman's Health v. Hellerstedt, bears the name of the clinic as the independent provider led the fight against the draconian rules meant to shut clinics down.