The week's news in review 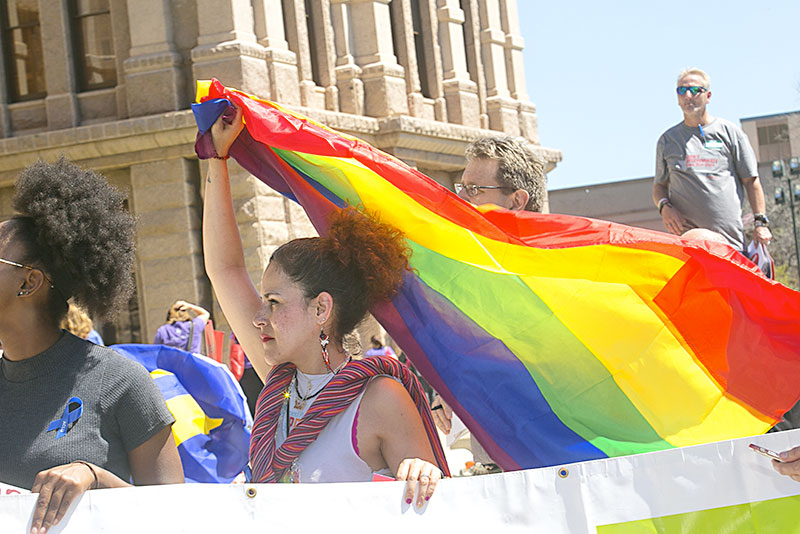 The Texas Senate voted to approve SB 6, the "bathroom bill," last Wednesday by a vote of 21-10. It now moves to the House of Representatives. House Speaker Joe Straus has indicated the bill, which would require transgender, non-binary, and gender nonconforming folks to use the bathroom matching the listed gender on their birth certificate, is not among his legislative priorities. Nevertheless, more than 1,000 demonstrators gathered outside the Capitol Monday to protest it. (Photo by Jana Birchum)

City Council meets today, March 23, following its brief spring break, when SXSW and testimony at the Lege occupied the mayor and several council members. It's a lengthy agenda, with the long-delayed Austin Oaks PUD matter headed for second reading and what looks to be a contentious 6:30pm public hearing. See "Council: A Busy Week at the Lege," Mar. 24.

DNA Lab Reopens? Two votes at Council today concern APD's shuttered DNA lab. The first is a proposed five-year contract with Texas' Depart­ment of Public Safety that would reopen the lab under DPS control at a municipal cost of $800,000. The second would bring an expert consultant to perform several studies on the lab, in conjunction with the county. Commissioners voted unanimously on Tuesday to approve that interlocal agreement. See "DNA Lab to Reopen?" for more.

The Big Ticket: FBI Director James Comey is in town for a symposium Thursday morning at UT. The FBI director confirmed publicly on Monday that his agency is investigating ties between Russia and Donald Trump.

Bummer, (DWI) Dude: Jamie Balagia, the offbeat defense attorney known as "The DWI Dude," was arrested on March 9 and charged with money laundering – he allegedly scammed Colombian clients out of $1.2 million. Balagia spent 11 days in jail before posting a $100,000 bond. He's due in a Plano federal court on May 15.

Public Information Reset: The City of Austin has updated its procedure for submitting public information requests via email. All requests should now be sent to public.information @austintexas.gov, except for requests to APD. Those now go to management.records@austintexas.gov. The city still accepts PIRs via its website: www.austintexas.gov/public-information-request.

Vote Your District: Austin ISD began talks on a major change to the way that trustees get elected. On Wednesday, the board operations meeting planned to discuss making a plurality enough to win an election – rather than a majority – thus removing the need for costly run-offs that draw poor turnout.

Developer Dumps Trump: A Downtown developer is moving ahead with plans to build a hotel without any link to the Trump Organization, as was previously suspected. Empyrean Devel­op­ment's project was initially linked with the Trump name, but the company says there are no Trump ties to the project, now called Hotel Mirabeau, to be built at 12th & Red River, where Brick Oven pizza now sits. "Neither Trump Hotels, nor Scion, nor any other affiliate is involved in the development, design, ownership, or any other aspect of this project," spokesman Mark Miner told the Statesman.