For Trump, ICE, and Abbott, tyranny and dishonesty go hand-in-hand It seems appropriate that a federal judge would let slip the open secret about recent Immigrations and Customs Enforcement raids in Travis County – that they were an intentional retribution for official ICE annoyance at the change in policy of the Travis County Sheriff's Office under new Sheriff Sally Her­nandez. Federal judges, still reasonably independent under our current political structures, have thus far been instrumental in frustrating the more invidious anti-immigrant impulses of the Trump regime in D.C.

Don’t y’all feel much safer now that the governor’s petulance, grandiosely reinforced from the White House, has undermined a dozen local programs designed to prevent crime and support families?

In a recent colloquy with an ICE agent witness (first reported in the Statesman and Texas Observer), Judge Andrew Austin recalled that he and another judge had been told in January that Travis County "could expect a big operation; agents coming in from out of town. There was going to be a specific operation, and ... that it was a result of the sheriff's new policy."

Previously, ICE had assured Travis County Judge Sarah Eck­hardt and others that the series of widespread ICE raids – carried out with a visible attempt to intimidate immigrants, and arresting fewer actual criminals than people who happened to be in the wrong place at the wrong time – had nothing to do with retaliation. In other words, an officially retaliatory policy had been compounded with official dishonesty – under the new Trumpian rules, we are quickly learning to expect more of the same, not surprisingly beginning with the Trumpian obsession with immigrants.

ICE had enjoyed a much more welcoming atmosphere under Hernandez's predecessor, Greg Hamilton, who expressly treated every ICE "request" as an obligation. Hamil­ton was otherwise a solid public servant, but he foundered against increasing public pressure not to allow the Sheriff's Office to become an extension of federal immigration enforcement. He was also increasingly isolated among his peers; former Austin Police Chief Art Acevedo declined to use local police officers as immigration enforcers, a policy maintained by his successor, Brian Manley.

Since so many people (naively or willfully) misunderstand this, it bears repeating that being "undocumented" is a civil offense, not criminal – "Show me your papers" being a phrase historically more familiar from World War II films than American traffic stops, and "illegal alien" nothing more than a dehumanizing slur. But the Trump administration, denouncing "sanctuary cities" and specifically targeting Travis County, has offered more ideological weaponry not only to ordinary ICE and border agents but to right-wing politicians, who have been only too eager to pick up the cudgels.

Gov. Greg Abbott in particular has been eager to misrepresent the sheriff's resistance to ICE demands as releasing "heinous criminals" back onto the streets – although all such accused "criminals" are duly prosecuted in local courts, regardless of their immigration status. It's worth emphasizing that Judge Austin's revelations about the ICE raids came in a hearing for an immigrant arrested at the Travis County Courthouse, where he was scheduled to appear on a primary charge of domestic violence.

How on Earth can the governor claim to be protecting "public safety" when ICE now feels empowered to interrupt attempts to prosecute family violence by seizing someone attending a court hearing? It's a lesson that won't be lost on undocumented persons – whether accused, victims, or witnesses – that a summons to court might also be an invitation to summary deportation. And in light of ICE's dishonest assurances to Judge Eckhardt, why should anybody believe the agent's testimony to Judge Austin, that the courthouse arrest was an "isolated incident," and "not something that's going to become pattern or practice." The agent's lawyer stopped him when he began to acknowledge that the enforcement "priorities" of the new federal administration are likely to undo those of the Obama administration, which at least didn't allow ICE an absolutely free hand.

But we are talking of public safety, and no doubt Gov. Abbott's determination to "hammer" Travis County for its impudence has only public safety in mind. That's why his retaliatory withdrawal of grant money to the county only affects such superfluous court programs as Parenting in Recovery drug treatment court, Family Violence Accelerated Prosecution and Victim Outreach, Veterans Court, Drug Diversion Court, Trauma Specific Treat­ment for Juveniles, and so on. This week, county officials learned that another $500,000 in grant money for the Family Drug Treatment Court was denied by the governor's office for the coming year, rejected for the first time since 2008. Don't y'all feel much safer now that the governor's petulance, grandiosely reinforced from the White House, has undermined a dozen local programs designed to prevent crime and support families?

That makes roughly $2 million denied by the state to Travis County, in service to an ideologically driven anti-immigrant campaign that has nothing to do with justice or public safety. Meanwhile, local citizens have raised about $136,000 in donations to the County's #StrongerTogether fund drive (www.traviscountystrongertogether.com), to help maintain these programs. It's hardly enough, but it will have to do until our state and federal masters recover their sanity. ICE Attacks!
Immigration took a beating this year from both the federal and state government 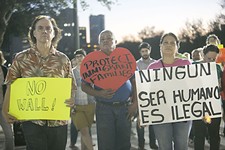 Undocumented, Unafraid
Balancing fear and power in the wake of ICE arrests