Council: A Busy Week at the Lege

City Council and the mayor confront the controlling state 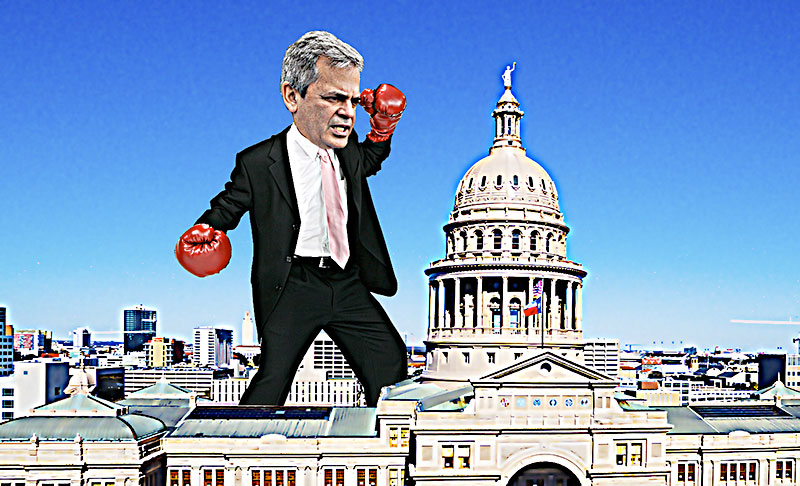 Although officially on spring hiatus last week, City Council's beat goes on, especially during the legislative session, when the folks under the Dome exchange everything they're always spouting about "local control" for a new motto: "Do as we say!" Among the Lege agenda items intended to reverse local initiatives that the city's legal team is tracking include everything the Chronicle's News team addressed last week: immigration, property taxes, transportation network companies, women's health, environmental protection, bathroom check­points .... There's more, as you can review in "The Texas Hammer," March 17, and that we'll continue to follow week by week.

It fell primarily to Mayor Steve Adler to do what he could to stem the legislative tide, somehow squeezing in Capitol testimony between myriad SXSW stops. Adler testified at hearings on property taxes and TNCs, submitted written testimony on immigration, and has been bustling on other matters likely to cause further agitation in Travis County. He was not alone: Council Member Ann Kitchen turned up to take her turn in the barrel on ride-hailing regs – as expected, various legislators seem determined to give deep-pocketed corps Uber and Lyft whatever they wish ("Lege for Sale?" March 14). CM Ellen Troxclair also testified on property taxes and ride-sharing – although on the opposite side from the mayor and Kitchen.

Some state leaders seem inclined “to not let local communities decide what their priorities are.” – Mayor Steve Adler

Asked by the Chronicle about his week at the Capitol, the mayor cautioned that the "deliberative part" of the session is just beginning, so it's too early to handicap all the bills aimed at reining in municipal authority. He noted that committee hearings at least sometimes educate legislators on distinctions that hadn't yet occurred to them, noting that the supporters of deregulating short-term rentals seemed surprised to learn the effective differences between owner-occupied and non-occupied STRs (in Austin parlance, STR 1s and 2s). He said defensive action on those kinds of bills may mean achieving amendments that make them easier for the city to tolerate. Never­the­less, he added, with the Republican domination of the Senate, "All the bills directed at cities look like they'll [pass] the Senate."

Moreover, Adler said, some bill deregulating TNCs looks likely to pass the House. "The initial bills look like they've been drafted by Uber and Lyft," he said, "giving them pretty much everything they want." That includes no fingerprint checks of drivers, although the mayor says he is hoping amendments can blunt the worst effects of the bills. "We might have to settle for fingerprinting incentives for drivers, and there are other aspects – fees, data collection – other things we're still working on. They seem intent on passing something; we're trying to determine what's the best achievable bill."

On property taxes, Adler said he told legislators that under the proposed cap – a proposed 4% increase would automatically trigger a rollback election – the state would be endangering crucial public services for only a "tiny" gain in tax relief: "Why risk cutting public safety for $2/month in tax savings?" If the legislators were serious about property tax relief, he said, they would tackle public school finance – which represents more than half of most property tax bills. (On Tuesday, the Senate voted to impose a 5% automatic rollback trigger.)

Adler made a related argument on Senate Bill 4, which would require local law enforcement to comply with all "detainer" requests issued by Immigration and Customs Enforcement. The mayor said the policy would undermine public safety by breaking the established trust between Austin law enforcement and the immigrant community. "If our local law enforcement is required to participate in voluntary programs that create the perception that they are also performing the functions of federal immigration agents," Adler wrote to the Senate State Affairs committee, "they will lose the trust relationship that keeps us all safe."

On the larger question of the Legislature's relationship with cities as reflected in these kinds of bills, Adler said that some legislators and certain state leaders seem inclined "to not let local communities decide what their priorities are," and such an approach ignores local differences. "Every city in this state is different," said the mayor, "and Austin is different on many of these issues. I think the state is stronger, in letting each city be reflective of its community."

City Council meets today, Thursday, March 23, with an agenda just short of 100 Items and at least a couple of pitched debates. A few highlights:

• Aging Oaks: The Austin Oaks PUD returns for a long-delayed second reading, pending still contentious questions of traffic mitigation and affordable housing, and with Council sharply split on these and other issues. The lengthy hearing is expected to begin mid-afternoon.

• Who Wants the Job?: An update and possible action on the incipient search for a new permanent city manager, still procedural.

The morning briefing is on the proposed Strategic Housing Plan; there's a lengthy list of zoning cases; and the musical honoree is TROY NoKA, who will undoubtedly be feelin' it.