It’s a war on women’s health 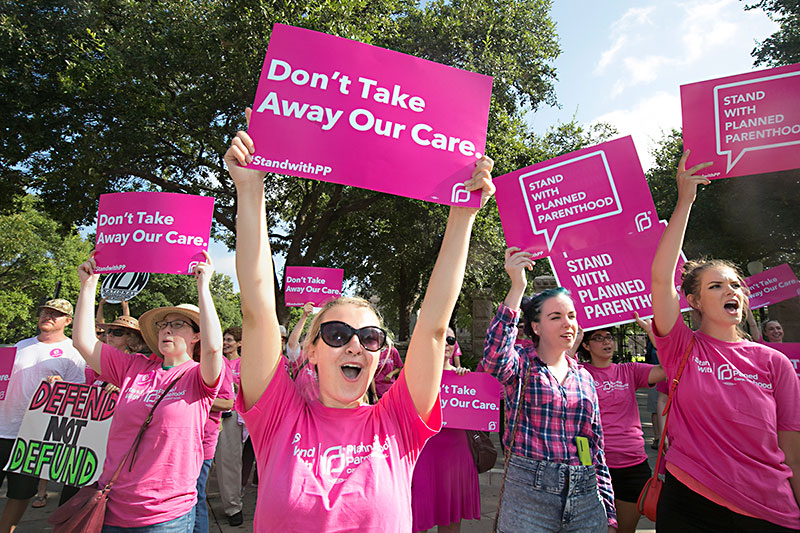 When it comes to defunding Planned Parenthood and attacking abortion rights, Texas pretty much wrote the playbook. In the name of anti-choice ideology, the Texas Legislature has systematically stripped the nationally affiliated reproductive health provider of funds locally and spent years decimating the family planning network, leaving women's health care in crisis.

In 2011, the Lege notably slashed $74 million in family planning funding to prevent Planned Parenthood from being first in line to receive state dollars, and a couple of years later booted PP and 50,000 low-income patients from a Medicaid-waiver program known as the Women's Health Program just because they "affiliate" with organizations linked to abortion. And the hits kept coming. Last legislative session, they kicked PP out of a breast and cervical cancer screen­ing program – that's right, cancer screenings. Their latest battle involves barring PP from the state's Medicaid program altogether. The basis for that most recent exclusion? Highly edited, widely discredited anti-choice Center for Medical Progress "sting videos" – a Republican president-appointed federal judge recently slammed the state for not showing a shred of evidence to prove wrongdoing. While the city of Austin's community partners have helped keep things afloat amid the attacks, the network is undoubtedly strained.

What the feds better remember when they start taking tips out of the Texas strategy, is that the highest court in the land has trumped the state’s extreme laws and put overzealous anti-choice politicians back in their place.

And while Austin used to be home to four abortion clinics, only two have survived recent anti-choice legislation. The notorious 2013 House Bill 2 – a package law designed to shut down health centers, famously filibustered by former state Sen. Wendy Davis – shuttered dozens of clinics in its wake. That's meant longer travel time, distance, and higher cost for abortion procedures – not to mention increased risk. And that's atop a slew of other anti-choice regulations, including an onerous 24-hour pre-abortion sonogram law and a rule that forces doctors to hand abortion-seeking patients a pamphlet full of medically inaccurate information. This session, lawmakers are back at it, introducing laws such as one that would force women to bury or cremate fetal tissue after an abortion or miscarriage – something Vice President Mike Pence signed into law while governor of Indiana, before it was eventually halted by a federal judge.

But what the feds better remember when they start taking tips out of the Texas strategy, is that the highest court in the land has trumped the state's extreme laws and put overzealous anti-choice politicians back in their place. Look no further than last summer's historic U.S. Supreme Court decision that found parts of HB 2 unconstitutional and required states to show evidence of a public health benefit when regulating abortion.

And never before has the state's capital seen such an outpouring of activism to defeat draconian bills. Thousands stormed the Capitol to fight HB 2, and the same fierce fighters are back under the Dome today. Progressive groups and reproductive health organizations have bound together like never before and built an unprecedented front. So if you want to run the country like a theocracy, expect a legion of fighters at the gates.