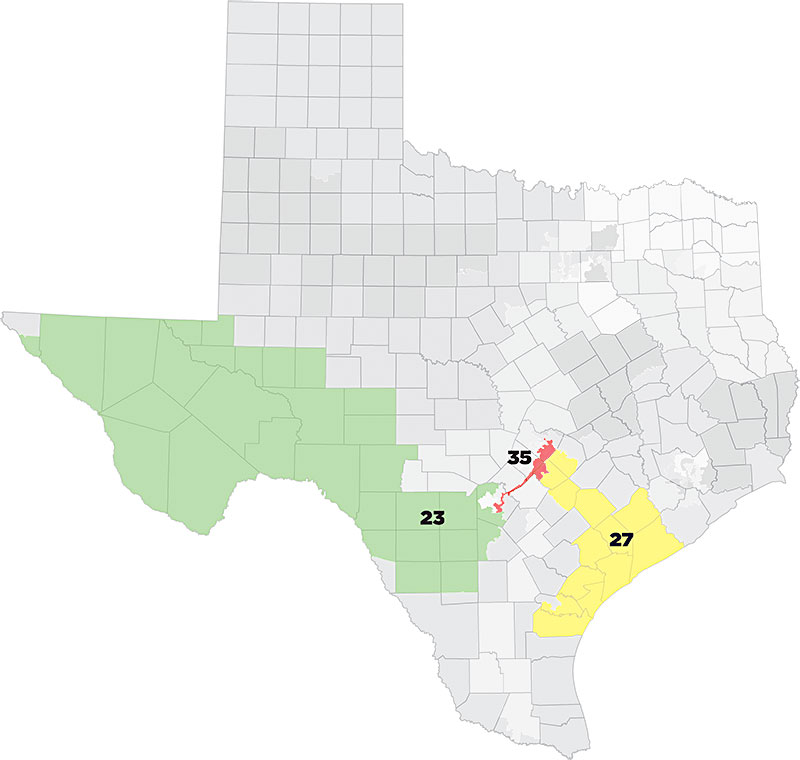 A panel of federal judges ruled that three Texas congressional districts were drawn in 2011 to be intentionally discriminatory against minority voters.

With any luck, the state of Texas might have slightly more fair congressional districts by the time of next year's elections. Don't get your hopes up – plenty of obstacles remain – but last Friday, March 10, a federal court ruled that the districts drawn by the Legislature in 2011 intentionally discriminated against minority voters. In theory, that means some or all of the districts must be redrawn – unless the U.S. Supreme Court rules otherwise.

The 2-1 decision (Perez v. Abbott) from the U.S. District Court for the Western District found evidence of intentional discrimination primarily in the drawing of three Texas districts: District 27 (currently represented by Blake Farenthold, R-Corpus Christi); D23 (Will Hurd, R-Helotes), and D35 (Lloyd Doggett, D-San Antonio). The latter will be of most immediate interest to Austinites, as Doggett has long been an Austin favorite son, though his district now includes only a small portion of Austin and is population-anchored in San Antonio. (Doggett occasionally jokes that he "lives on I-35.") The court also opined that districts in the Fort Worth area (one of which also reaches to Austin) were "packed and cracked" to disadvantage minority voters, so any redress might also affect that region. (Redrawing some districts inevitably reverberates elsewhere, so it's too soon to know the broader effects of any realignment.)

The case has been up and down in the federal courts for some time, and the 2011 district lines were temporarily redrawn by the courts for the purposes of the 2016 election. That's the thread on which state Attor­ney General Ken Paxton hung his response to the opinion, arguing in a press release that the 2011 lines are "moot" and "there are no lines to redraw," though he didn't immediately announce an appeal. Neverthe­less, the court's temporary lines were intentionally minimal in effect, and if this decision is upheld, it could result in a more dramatic redesign of the Texas map. More remote is the possibility, suggested by some observers, that Texas could again be required to submit to "preclearance" by the Department of Justice of voting procedure changes – a requirement recently ended by a Supreme Court ruling against that provision of the Voting Rights Act.

Doggett told reporters that he hoped that any new districts would be drawn to make representatives more "accessible and accountable" to their constituents, and that in principle this should mean stronger Democratic presence in the Texas delegation. In the meantime, he said, he would have to assume that a new D35 would look fairly similar to the current version – meaning plenty more congressional commutes on I-35.