Political pandering instead of actual action Just when you think you can believe Texas lawmakers possess the potential to reconcile their differences, come together amicably, and pass urgent, bipartisan legislation without grandstanding or drama, you realize you're living in a fantasyland.

Last week, sparks flew in the state House when a conservative lawmaker derailed what should have been a calm and focused discussion – devoid of the usual partisan spectacle – to help vulnerable children in state custody. The debate, held March 1, centered on House Bill 4 by Rep. Cindy Burkett, R-Sunnyvale, a major piece of legislation that would increase state-funded payments to low-income family members who take care of child relatives living in the foster system (referred to as "kinship care"). Today, relatives get a one-time stipend per child; the bill would up that to a monthly stipend if their annual income falls within 300% of the federal poverty line. HB 4 is part of a package of sorely needed Child Protective Services reform bills. So, leave it to a right-wing legislator to hijack the opportunity to help needy children and instead use it to attack the rights of immigrants.

Enter Woodlands GOP Rep. Mark Keough, a pastor and the bill's co-author, and his proposal of an amendment that would disqualify undocumented families from the extended kinship payments. "Why would we include an entitlement for people who are here illegally and unaccounted for?" he asked. "I have a hard time with that."

In the most impassioned speech held on the House floor this session, Rep. Rafael Anchia, D-Dallas, slammed Keough's amendment, calling it "completely offensive" and flat-out "racist," and suggesting it "conflates children who are in desperate need with lawbreakers." It's unfair to further punish abused and neglected children born into families they didn't choose, noted Anchia, as well as other lawmakers who took the podium. 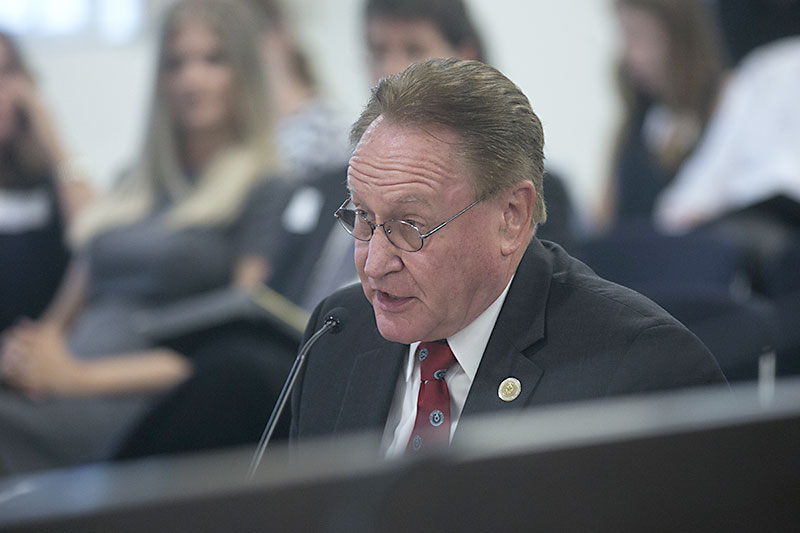 "These vulnerable, immigrant kids, you're using them as a prop so you can go home and beat your chest about how tough you are on immigration," charged a fired-up Anchia, a Latino and the son of immigrants. "But I gotta tell you what this feels like: This feels like really racist, anti-Hispanic stuff. When we're trying to help kids in the most dire circumstances you're taking the opportunity to attack. And that is wrong."

Anchia, in a counter-assault on "sanctuary industries," accused Keough, a former car dealer, of taking money from an undocumented immigrant when he sold cars, and of probably hiring an undocumented worker. ("Really?" retorted Keough, standing behind Anchia.) The Dallas representative hinted that if anti-immigrant attacks keep popping up, it'll lead to a "very ugly road" for Republicans.

It's wasn't just Dems who assailed the amendment; Keough's questioning even drew ire from fellow Republicans. "I am pretty heartbroken to be part of this today," said Rep. Byron Cook, R-Corsicana. "We came here to take care of children that can't help their circumstance. If we put children first we wouldn't be obsessing about who is providing the care. I'm disturbed by this. I'm a 62-year-old man and feel like crying today. I really do," said Cook.

“These vulnerable, immigrant kids, you’re using them as a prop so you can go home and beat your chest about how tough you are on immigration.” – Rafael Anchia

Houston Democrat Rep. Gene Wu tried offering a "compromise" amendment which would have opened up kinship payments to undocumented families if they signed a sworn affidavit about household income and property. But his partisan allies failed to warm up to it. "I don't think you can find a middle ground to hatred or racism," said Rep. Roland Gutierrez, D-San Antonio. "This is so anti-Christian, and the author that proclaims himself a pastor. He should know better."

Keough defended himself on the floor. "I'm not a racist. I love people, and I love you all," he said, before finally (and wisely) withdrawing the amendment.

HB 4 eventually passed the House in an unanimous 145-0 vote, but not without a drawn-out fight over a completely unrelated conservative topic. Surely echoing what's on the minds of the Dems, Repub­lic­an moderates, and Lege observers alike, both Anchia and Cook fretted aloud on the House floor that if lawmakers could attempt to sink bipartisan discussion with political pandering this early on, what hope is there for the next three months? To his colleagues on the floor, an exasperated Anchia asked, "If we are starting like this, then what the hell is the rest of the session going to be like?"