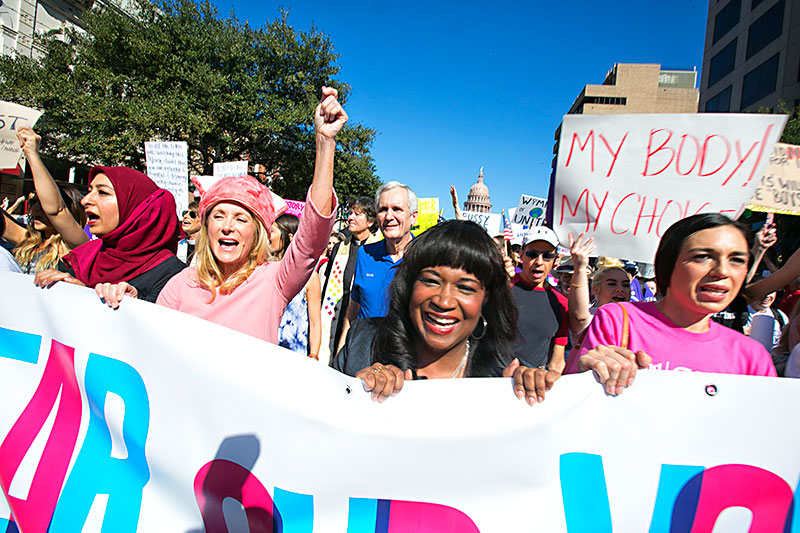 On Wednesday, March 8, women are encouraged to join A Day Without a Woman, a national strike coinciding with International Women's Day that was planned by the Women's March on Washington in an ongoing effort to defend women's rights in the current political climate. Organizers want to use the day to draw attention to the impact women, including transwomen, and gender nonconforming folks, have on the economy while systematically earning less money and experiencing higher rates of discrimination and sexual harassment in the workplace.

Influenced by the strikes of New York's Yemeni immigrant store owners and Feb. 16's Day Without Immigrants, women are encouraged to take March 8 off work and avoid making economic contributions (with exceptions for small, women- and minority-owned businesses). Organizers suggest strikers use the day to attend rallies, marches, or support community nonprofits.

Locally, preparations for the strike have stirred some controversy. Because Texas is an at-will state (meaning employers can fire workers without reason), organizers of Aus­tin's Women's March (renamed March On! Texas to be more inclusive) have decided not to participate in A Day Without a Woman. Melissa Fiero, Austin's lead coordinator for the march, told the Chronicle that she and other organizers decided "almost unanimously" that "the strike would disproportionately cause harm to communities we've attached ourselves to protect."

Fiero noted the march's mission to defend women's rights, safety, health, and families in solidarity, but said ultimately that she believes the strike goes against organizers' objectives by "neglecting those who can't afford to lose a day of pay or – worse – their job." According to The Atlantic, approximately 100 workers across the country were fired for participating in A Day Without Immigrants. "It just didn't feel right asking people to take that risk, but we support those who decide to strike," Fiero said. Instead, groups throughout the state have begun organizing an alternative action: Spending a Day With Texas Women. March On! urges people to support solely women-owned businesses on March 8 – an idea that may allow allies to participate more easily.

Susan Post, owner of BookWoman, Aus­tin's last remaining feminist bookstore, echoes Fiero's sentiments. She told the Chronicle she considered participating in the strike, but ultimately decided "having the feminist bookstores open is important. It seems counterintuitive to close when women need a space to gather and feel empowered on the 8th."

Planned Parenthood of Greater Texas will also remain open for business. "We'll be honoring the initiatives by doing what we do best: providing health care, community health education, and advocacy that supports women and families in our communities," said Sarah Wheat, PPGT's Chief External Affairs Officer. PP will also host its Dallas Annual Awards Luncheon that day – one of the organization's biggest benefits of the year. Staff and guests are encouraged to wear red.

Bunkhouse Group, Liz Lambert's Austin-based hospitality company, is taking a more open-ended approach to the strike. While the company won't exactly close its doors on March 8, its higher-ups have been vocal about supporting staff's decision to take the day to participate in the strike. Bunkhouse employees were not punished for participating in A Day Without Immigrants. On the day of the Women's March, Bunkhouse donated $6,600 to Whole Woman's Health and offered free coffee to all marchers. During South by Southwest, the company will continue to support women's rights by partnering with former Sen. Wendy Davis' Deeds Not Words, Whole Woman's Health, and Plan­ned Parenthood for a March 15 fundraiser.

Allies should promote the strike, support women-owned businesses, and wear red. March On! is compiling a database of Texas’ women-owned businesses and will release a map closer to March 8. The Women’s March has a letter available (www.womensmarch.com/letter) that those planning to strike can use to inform employers of their participation.

READ MORE
More A Day Without a Woman

Page Three: How the Sausage Gets Made
A few words on the Day Without a Woman strike