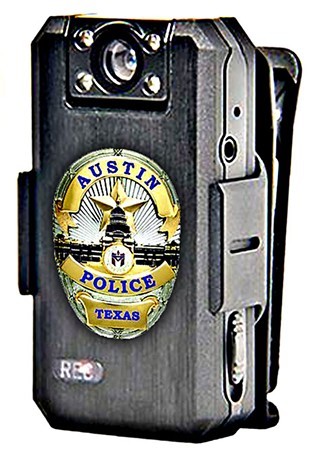 Council was to approve a one-year contract to provide APD with the cameras, with up to four one-year extensions, at a cost of $4 million.

Body cameras were back in the news last week, though Austin Police officers are no closer to getting them. After learning last week that City Council planned to address (and likely approve) the purchase of 724 wearable devices from Taser International, small-market vendor Utility Associ­ates Inc. obtained a restraining order from District Judge Karin Crump to block the signing of that contract. Council shelved the Item indefinitely in response, leaving body cams in limbo for the foreseeable future.

Utility has been locked in a legal dispute with the city over the outcome of last year's bidding process, with that case now stalled in appeals ("Out of Focus," Nov. 25, 2016). Council was poised to approve a one-year contract to provide APD with the cameras, with up to four one-year extensions, at a cost of $4 million. Last August, District Judge Orlinda Naranjo restrained the city from fulfilling a separate, much larger contract it had signed with Taser to provide about 1,700 cameras, after Utility protested the city's choice and petitioned the court to stop the contract from proceeding.

City spokesperson Alicia Dean told the Chronicle last week that the two contracts were not connected, and that both could still be fulfilled going forward. "One does not negate the other," she said. Were both contracts to come to fruition, the city could pay Taser $16.2 million for cameras and support services. The police department needs and will use all the cameras should they get them, Dean said.

With the larger Taser contract on ice since last August, the city sought to use a purchasing cooperative administered by the Texas Association of School Boards known as BuyBoard, which does not require city officials submit a request for proposal (RFP). Council's support documents indicated that that move was prompted by the department's continuing need for the cameras, and concern that $750,000 in grant funding might be lost.

In court filings last Tuesday, Feb. 14, Utility and co-plaintiff Bruce Evans (an Austin resident who joined the case to strengthen jurisdiction) accused the city of "scandalous tactics" and asked the court to intervene to prevent the city from being able to sign a second contract with Taser, given that the original dispute has yet to be settled. The following day, Judge Crump granted the temporary restraining order, writing that without one, the city might execute or begin performing a contract with Taser, which "would violate or circumvent" the court's earlier orders and "cause irreparable injury" to the plaintiffs. Documents filed with the court also include requests to enter into nonbinding mediation and reference proposals by Utility to resolve the matter out of court, none of which have apparently borne fruit. (Utility CEO Ted Davis declined comment, as did the company's attorney. In previous interviews with the Chronicle, Davis has been adamant that his company deserves to have been awarded the contract.) A hearing set for Thursday, Feb. 23, should determine whether the restraining order will be reclassified as a temporary injunction pending a full trial.

The city issued a statement in response, which read in part: "The City of Austin believes this cooperative purchase is a way to outfit a limited number of officers with cameras while still abiding by the August 2016 injunction, which remains in place, regarding the initial contract for this technology." The city assured that it plans to abide by the court's ruling.