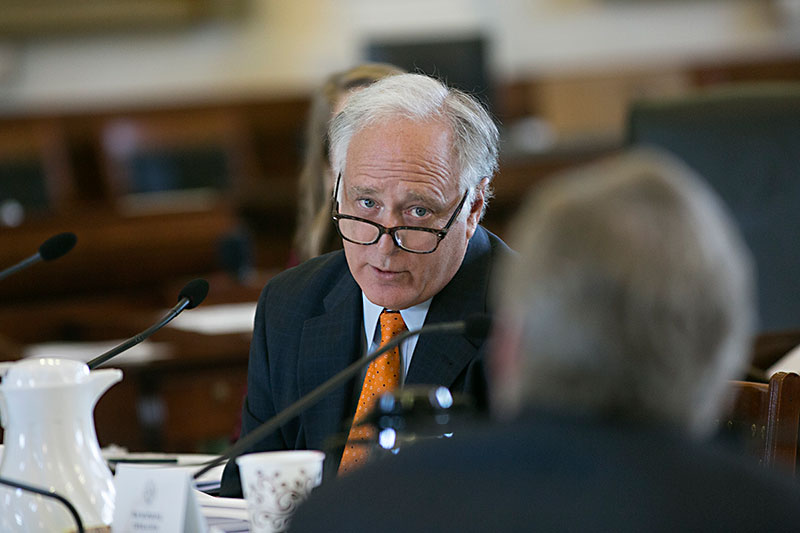 Not much has changed in the Senate chamber where male lawmakers infamously tried in 2013 to silence their women counterparts for standing up against anti-choice bills. Take last Wednesday, for example, during an all-day Texas Senate Committee on Health & Human Services hearing on a trio of abortion restrictions, in which Maggie Hennessy, a master's student at UT and an intern with NARAL Pro-Choice Texas, delivered passionate testimony against the bills to a table of mostly white, male legislators. Over her allotted time, Hennessy was given a warning to stop talking. But she continued, in an effort to complete her final sentence.

"I urge you to all stop playing with reproductive health care like it's your own political puppet," she said, angering Sen. Charles Schwertner, R-Georgetown, chair of the HHS committee. Schwertner gaveled her into silence so hard he shattered the glass on his table, evoking stunned shock among those inside the chamber. If there was ever visible proof of how intensely Texas GOP lawmakers want to shut down pro-choice women and literally push them away from the decision-making table, Schwertner's gaveling was it.

The heated outburst came after Hen­nes­sy, like dozens of other pro-choice testifiers, explained to senators how Senate Bill 415, authored by Sen. Charles Perry, R-Lubbock, would ban the safest and most common second-trimester abortion procedure, known as dilation and evacuation (D&E), and could put women's lives in jeopardy. (Notably, Joe Pojman of the anti-choice group Texas Alliance for Life had urged senators to reject the "reckless" bill as it would not be able to survive any challenge in federal court.) Also up for debate that day were SB 258, a bill sponsored by Sen. Don Huffines, R-Dallas, that would require fetal remains be buried or cremated, and Schwertner's SB 8, which would restrict fetal tissue donation and prohibit the already illegal dilation and extraction (D&X) procedure, ideologically referred to as "partial-birth abortion." Opponents argue that all three bills compromise safety, the doctor-patient relationship, and women's ability to access legal abortion. 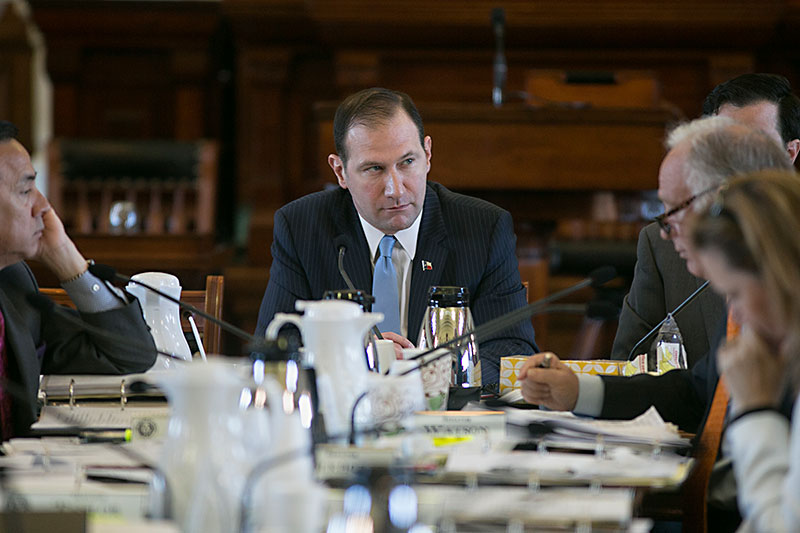 Charles Schwertner listens to questions from Kirk Watson. (Photo by Jana Birchum)
The heated outburst came after Hennessy explained to senators how SB 415 would ban the safest and most common second trimester abortion procedure, and could put women’s lives in jeopardy.

Hennessy wasn't the only passionate testifier. Austin Com­munity College Trustee Julie Ann Nitsch delivered a scathing rebuke of not just the legislation but the lawmakers. "You should be ashamed of yourself. I am ashamed to be a Texan because of you," she seethed. Lucy Stein of Progress Texas slammed the public process – senators only invited testimony from anti-choice figures, who were given four minutes each, while general testimony was limited to two minutes, and the public received just 48 hours' notice of the hearing. "The resistance is emboldened, too, and we will not be silenced," said Stein.

Meanwhile, anti-choice activists filled the room with inflammatory and fictional terminology (we should note at some point that "dismemberment abortion" is not an actual medical term), lobbied lawmakers to outright ban abortion, and even compared the fight against abortion in Texas to the Holocaust.

Clad in a symbolic orange tie, Sen. Kirk Watson, D-Austin, grilled bill authors, asking each of the three to explain how their legislation "enhances the health and safety of women." Stunningly, in a reversal of their veiled defense of previous anti-choice bills, each lawmaker admitted that such health and safety wasn't the objective. "The health of the woman is not the target of SB 415," said Perry. And even more revealing, when asked if he believes women deserve the constitutionally protected right to bodily autonomy and dignity, Huffines chillingly declined to say yes. "I was surprised by his candor," Watson told the Chronicle after the hearing. "I don't think he'd ever been asked that question so directly. But it pretty openly sums up his misguided effort and reveals his lack of respect for women."

While all three bills were left pending in committee, don't expect them – or the toxic masculinity and machismo exhibited by anti-choice lawmakers – to fade away this session. If Hennessy's testimony is any indication, one should not dismiss the voices of those who will not cower to attempts to silence and intimidate women and pro-choice advocates, either.

"It was my first time testifying at the Capitol, so it really shocked me," Hennessy told me after the hearing. "But [Schwertner] doesn't scare me – in fact, his behavior just encourages me to testify more and fight even harder." 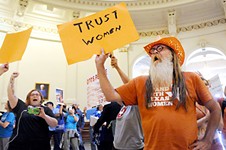