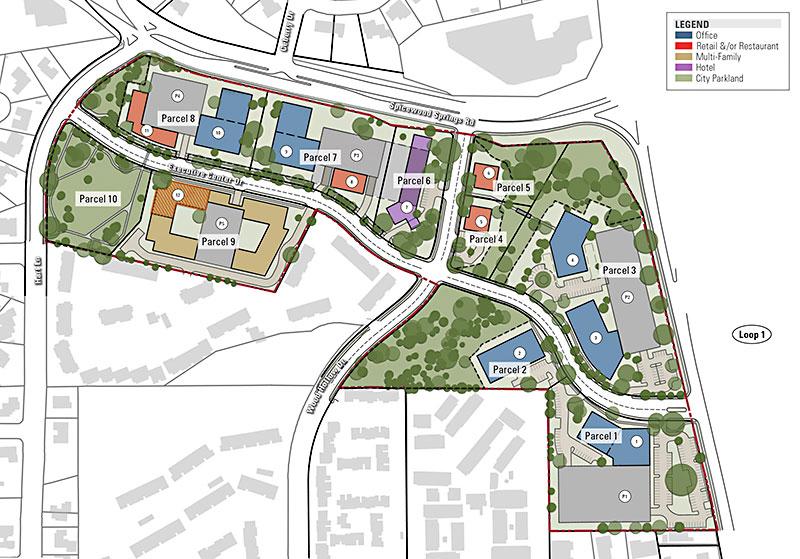 Work in progress: The Austin Oaks planned unit development (pictured above) is scheduled for an evening public hearing (6:30pm or later) at City Council Thursday night. The proposed PUD is a multitract, mixed-use development at the intersection of MoPac and Spicewood Springs, that would include commercial, residential, and park space, plus a hotel. Neighbors who have submitted a valid petition against the plan want to see more residential and less commercial use. The conceptual rendering is by TBG Partners landscape architects (used with permission).

The last couple of City Council meetings have been relatively sedate, medium-length affairs, not triggering elaborate fireworks, and ending before 9pm. Judging only from some heavily contentious zoning matters returning to the 68-Item agenda, that's not likely to happen today (Feb. 16). Both the Plaza Saltillo case and the Austin Oaks PUD are set to return before the dais: the former with the public hearing still open after last week's first reading and several council members still unconvinced about the overall project plan; the latter also pending second and third readings, now with a valid neighborhood petition in opposition and a changed political context.

Looming above and beyond all this heated local material is the cloud of uncertainty emanating from Washington, most recently the Immigration and Customs Enforce­ment raids that have roiled Austin and reportedly five other cities over the last week. Several council members (notably Delia Garza and Greg Casar) have been closely following the raids, Austin Police Department Interim Chief Brian Manley has been demanding more information from ICE, and on Tuesday Mayor Steve Adler issued an open letter to Austinites, describing his city as a "welcoming, inclusive community" and defending APD's equal protection policies and those of Travis County Sheriff Sally Hernandez. ("Mayor Adler Addresses ICE Raids …," Feb. 14).

Austin Oaks promises its own donnybrook, as the development was already embattled last year.

The immigration battle appears twice on today's agenda – first with Item 18, a $200,000 funding increase to Catholic Charities of Central Texas for "legal and counseling services to immigrants." This is in response to a December Council direction for staff to find emergency funding in anticipation of Trump regime actions – nobody knew that it would be needed this soon. It's on the consent agenda, and not likely to raise much opposition, but before passage it's likely to be the occasion for additional public and Council commentary.

The Plaza Saltillo matter (Items 57-59) returns after a week to allow D3 CM Pio Renteria to try to work his backstage magic to broker an agreement among landowner Capital Metro, developer Endeavor, and the nearby neighbors over a couple of outstanding issues, including a request for greater height on one (of three) tracts and a disagreement over just how much affordable housing is achievable on the site. ("Council: Committee on Committees," Feb. 13). And it appears council members have plenty of their own questions about how the project changed from announced parameters in 2014. As they say on the traffic alerts: Expect delays. Austin Oaks promises its own donnybrook, as the development was already embattled last year. Along with the Grove at Shoal Creek, the PUD controversy bears considerable credit for the defeat of former D10 CM Sheri Gallo and her replacement by newcomer Alison Alter. Alter requested the two-week delay that placed the matter on today's agenda, and the "time certain" of 6:30pm to allow a full complement of Northwest Austin witnesses. The outstanding questions run the gamut from traffic, density, retail and commercial elements, tree preservation, etc. – anticipate a rhetorical version of MoPac at rush hour.

And 6:30pm for that debate would seem quite optimistic. Among other matters that will consume the day:

• Contract Hold 'Em: Members have already posted questions about several substantial contracts currently on the consent agenda, including: the $2.5 million reconstruction of the Convention Center kitchen (Item 6); $4 million to Taser International for those long-delayed APD body cameras (Item 30; the original contract is in court over unfair competition issues, and state District Judge Karin Crump did not look kindly on the city's attempt to issue a new one – postponement seems likely).

• From See to See: Item 32, sponsored by CM Ora Houston, the mayor, and three other members (i.e., needing only one more domino) would initiate staff research to extend "Capitol View Corridor" protections to areas of East Austin. The apparent theory is that there is no sentimental Westside notion so dubiously nostalgic that it can't cross I-35, for reasons of "equity." You might think that Travis County's courthouse conundrum, and the city's bank-busting difficulties over the Waller Creek Tunnel project – both due in part to existing "View Corridor" restrictions – might make folks hesitate to prevent tall buildings in the urban core. Then again, maybe that Plaza Saltillo tower-height issue is at the bottom of this one ...

• Incentives Tweak: The mayor and others hope to revise existing economic incentives policies (Item 33) to encourage companies to bring "middle-skill" jobs, especially to the Eastern Crescent, one aspiration of the Spirit of East Austin initiative.

• Executive Pondering: Executive session items seldom raise eyebrows and often get withdrawn. But flies on the wall would certainly want to hear the discussion of Items 42 and 43 – possible city acquisition of "Muny" (Lions Municipal Golf Course) from UT-Austin – and Item 44, the legal issues affecting undocumented immigrants. We'll just have to wonder and wait.

There is plenty more to zone (Thrasher Lane, Elysium Park, Bouldin Courts, Villas at Vinson Oak), plenty to contend. The musical honorees are those festive folks from Honk!TX – expect them to blow their own horns. And former Mayor Will Wynn will be in the house to accept a proclamation celebrating 10 Years of Climate Leadership. Let's keep it clean … and renewable.