The Next Steps for Elysium Park 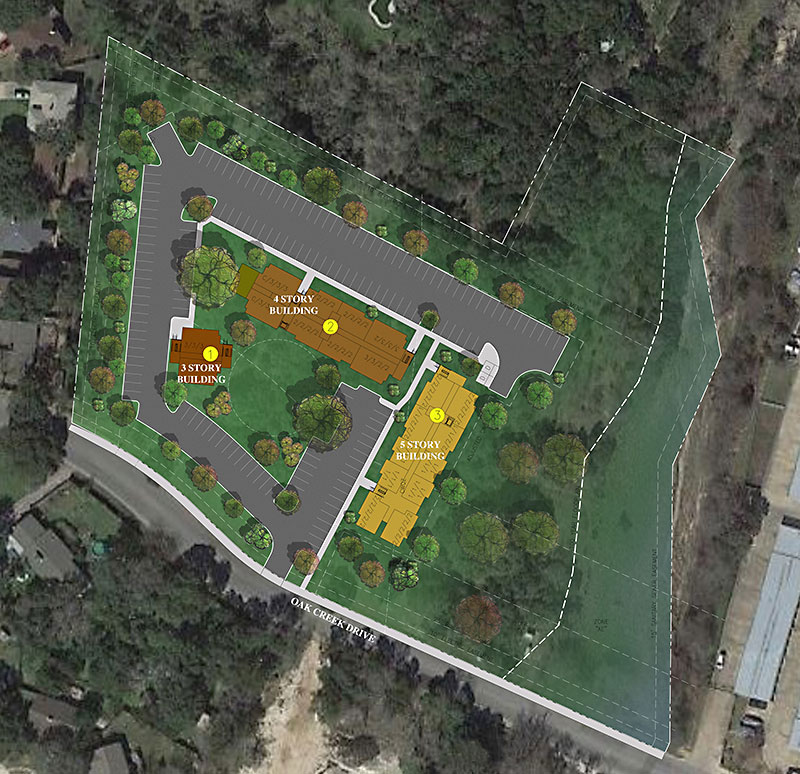 Site plan for the Elysium Park affordable housing project, on Oak Creek Drive, just west of MoPac above Parmer Lane (Council District 7). As proposed, the project would include 84 1-, 2-, and 3-bedroom units: four at market rate and the rest priced from 60% Median Family Income down to 30% MFI.

Last Thursday's City Council meeting was mercifully brief ("Ready for Solar and Recycling Too," Feb. 6), and today's 51-Item agenda (Feb. 9) doesn't appear too daunting – although it's worth noting that the list includes proposed committee-and-meeting changes, so they may spend some meeting time debating better meetings. Less likely to cause dissension are 11 resolutions (Items 11-21) from the Department of Neigh­borhood Housing and Community Development, requesting Council approval of developer applications for state low-income tax credits helping underwrite several multifamily projects across the city.

One of those is the Elysium Park project, which at last week's meeting received Council's first-reading approval of a zoning change (from light-industrial to multifamily residential) that, if sustained, will enable an 84-unit, deeply affordable complex on Oak Creek Drive, just west of MoPac above Parmer Lane. The project first came to Council (in a slightly different form) in August, but foundered (and was postponed) due to nearby neighborhood opposition and an abstention by state Rep. Celia Israel, who declined to write a letter of support that would have made the ranking difference at the state Department of Housing and Community Affairs. ("Affordability: Everywhere but Here," Aug. 8, 2016.)

Based on last week's testimony, the neighborhood opposition persists – the explicit reasons are transportation and flooding issues, but with the usual undercurrent of anxiety over nearby low-income housing. Council heard the complaints, but noted that no site is perfect, and voted unanimously to approve the zoning change.

In August, Israel pointed to her support of similar projects elsewhere in her district, and cited lack of mass transit and poor pedestrian accessibility for her "remaining neutral" on Elysium Park (although those problems in fact affect not just prospective tenants, but everybody who lives nearby). Asked this week if her position might change in light of the unanimous Council support, she said her staff is still reviewing the project. "I hope I will be able to support it," she said, while reiterating her concerns about transportation near the site. (To address that objection, Saigebrook Devel­op­ment says it has set aside funds for a potential shuttle service for the complex.)

If the city is to be seriously dedicated to increasing the supply of affordable housing, projects like Elysium Park bear considerable promise to fulfill that goal.

With variations, such objections are likely to be raised over one or more of the nine projects to be contemplated for tax-credit application today, less in front of Council (where pro forma state application approval is likely) than in the documentation weeds of the developers consulting with neighborhoods and city and state agencies. Yet if the city is to be seriously dedicated to increasing the supply of affordable housing, these kinds of projects bear considerable promise to fulfill that goal. Elsewhere on the agenda, Council will consider:

• Mobile Bonding: Staff returns with a recommendation (Item 4) for an engineering firm to begin work on the Corridor projects approved in last year's Mobility Bond (staff recommends HDR Engineering, but there are other contenders).

• Referred to Committee: Council spent considerable work session time Tuesday afternoon debating various ways to revise the Council committee structure and the regular meeting planning (Items 34 and 35), in hopes of streamlining systems that have remained ponderous. They did not sound close to a resolution – anticipate more gum-flapping.

• Downtown East: Mayor Steve Adler is offering an omnibus resolution (Item 33) that would direct staff to compile ways to design and fund improvement projects on the east side of Downtown (roughly from the new Dell Medical School complex to the Austin Convention Center – the latter the subject of a Tuesday briefing on potential expansion and its funding). This is a Big Gulp of research, and might well be broken into separate parts.

• Development Development: The new, customer-friendly Development Services Dept. is outgrowing its digs on Barton Springs Road, and proposes (Item 24) purchasing five acres near Austin Community College at Highland Mall as a site for a one-stop shop. This item would authorize initial negotiation of the deal; some CMs seemed skeptical of both the necessity and the location, so approval is uncertain.

• Zoning Saltillo: Of the handful of zoning cases, three (Items 43-45) concern Plaza Saltillo, with details still under dispute among various neighborhood factions. (District 3 CM Pio Renteria hosted yet another meeting among stakeholders Tues­day afternoon, in hopes of an agreement.)

And in other business, Council continued its early, informal review of departmental budgets, targeting a better grasp of the overall budgeting context, once the detail work begins in late spring. Wish them well.