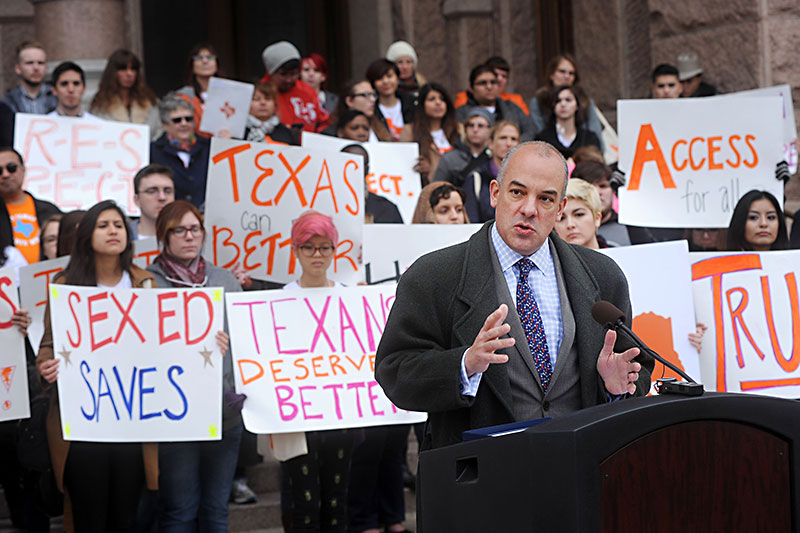 When Chris Turner took to the dais in the Speaker's Press Room after Gov. Greg Abbott's Jan. 31 State of the State address, the new chair of the Texas House Democratic Caucus almost sounded conciliatory. The Grand Prairie representative opened with a softball: "We agree with Governor Abbott on one thing," he said. "Texas is exceptional." Turner also conceded that there were a few points of policy agreement between the governor and state Dems – but as for the rest of Abbott's agenda, his description was short and brusque: "Needlessly divisive, pointless, and frankly ... a waste of time for this Legislature."

A few days later, like everyone else, Turner was absorbing the fallout of the latest push toward GOP radicalism at both the state and national level. He hadn't seen any news by the time we spoke, he said. "Are we in a new war yet?" Not yet, but not for Trump's lack of trying. "These guys are learning governing is hard."

So is life in opposition. In taking over the caucus, Turner inherits a party that only holds 55 positions in a 150-seat chamber. He can take solace in the fact that Speaker Joe Straus lets House members dictate much of the session's direction, leaving opportunities for deals and collaborations: Across the dome, his Senate counterpart Sen. José Rodríguez, D-El Paso, faces "my way or the highway" domineering from Lt. Gov. Dan Patrick. There's what Turner called Patrick's "top 30 priorities," all seemingly drawn from the executive branch's list of time wasters, "whether it's private school vouchers, or this weird, unnecessary bathroom bill."

Even while Straus has yet to announce committee appointments (the first vital stage before bills can be heard), and Abbott and Patrick have been stealing headlines, Turner has been busy. His first job calls for a dusting off of the caucus as an operating entity after 19 months away from the Legislature: establishing clear lines of communication, with clear support for membership. Most important, he said, has been establishing "a clear message of what House Democrats stand for, what we're fighting for." He said he thinks Democrats got working on that "the day after the election, with the response to the State of the State address."

To turn a well-worn phrase, this isn't Turner's first rodeo. He already served as chair, during the 2013 session, but in that iteration of the party hierarchy, that made him the number two behind caucus leader Rep. Yvonne Davis, D-Dallas. Now he holds the retitled top position. Following Davis and her predecessor, Houston's Jes­sica Farrar, Turner is the first white male to lead the delegation since Jim Dunnam in the 81st Session. Both represent rarities within a caucus of primarily minority and female representatives: Dunnam numbered among the last of the Anglo male Dems from a rural district, representing Waco before HGTV and Chip and Joanna Gaines made it cool, while Turner is the only white male Dem to hold an urban or suburban seat. (Grand Prairie is located in Dallas and Tarrant counties.) And, like Dunnam, Turner lost his seat in 2010. Difference is, he got one back. Turner, who first came to the Lege in 2008, won a seat in 2012 after losing in 2010 because Republican gerrymandering in 2011 drew him into a blue seat. He's free to swing for the fences without fearing a run from any Republican opponent.

Fortunately for the Dems, Turner is okay with being a slugger. In 2014, when Sen. Wendy Davis' gubernatorial campaign was floundering and spending cash on out-of-state consultancies, Turner came in to help right a sinking ship. Under his management, Davis may not have won, but she gained a coherent strategy (attacking Abbott over ethical conflicts) and pulled closer to the soon-to-be-governor than at any point in the campaign. That came in part from Turner applying earlier political lessons learned on four campaigns with Con­gress­man Chet Edwards, famous for being the Democrat who held the most Repub­lican seat in America (Texas' 11th). Turner says the strategy boils down to two prime tactics: make your message clear, and leave everything on the field.

When House Republicans tried to disrupt Davis’ 2013 filibuster by presenting her with 84,610 sheets of paper (to represent the number of Texan abortions in 2008), Turner stood outside their press conference and nakedly accused them of a "cheap political stunt."

He has been known to walk a fine diplomatic line, as likely to get an award from the Texas Veterans of Foreign Wars as Equality Texas. He also has Dunnam's instinct on when to play bipartisan politics and when to go for the throat. When House Republicans tried to disrupt Davis' 2013 filibuster by presenting her with 84,610 sheets of paper (to represent the number of Texan abortions in 2008), Turner stood outside their press conference and nakedly accused them of a "cheap political stunt." Yet his attacks can sometimes have a bipartisan spin. In his response to the State of the State address, he challenged Abbott to live up to his commitments to kids in foster care, asking him to tell Attorney General Ken Paxton to quit fighting the court ruling that the current system is unconstitutional. He expects to find common ground with House Republicans, especially Straus, who he said "will, by and large, keep the House focused on solutions to real problems, whether it's public education, mental health care, or child protective services.

"We may, and probably will, disagree on those issues, and the best ways to resolve them, but at least we agree on what the issues are," he said.

Aside from getting the gang on the floor back together, Turner's first business as caucus leader will be analyzing his Capitol bench. A lot of talent has gone, such as veteran legislators Syl­ves­ter Turner (now mayor of Houston) and Austin's Elliott Naishtat (retired). They had committee seniority, but took another big hit with the departure of Trey Mar­tinez Fischer: When­ever Repub­lic­ans got a controversial bill to the floor, it would only be a matter of time until the San Antonio Dem would be at the back mic throwing out procedural roadblocks. Turner suggested that there is plenty of talent in his team of 55: "I'm optimistic that, while outnumbered, Democrats can make an impact."

The reality is that Dems have been markedly ineffective since the Tea Party's takeover, and that's not just about the total numbers. Last session, some Dem reps on the floor quietly fumed that, even when they theoretically had enough nays to defeat legislation, enough of the caucus was AWOL to leave them powerless to oppose. Moving forward, it'll be Turner's duty to rally the forces.