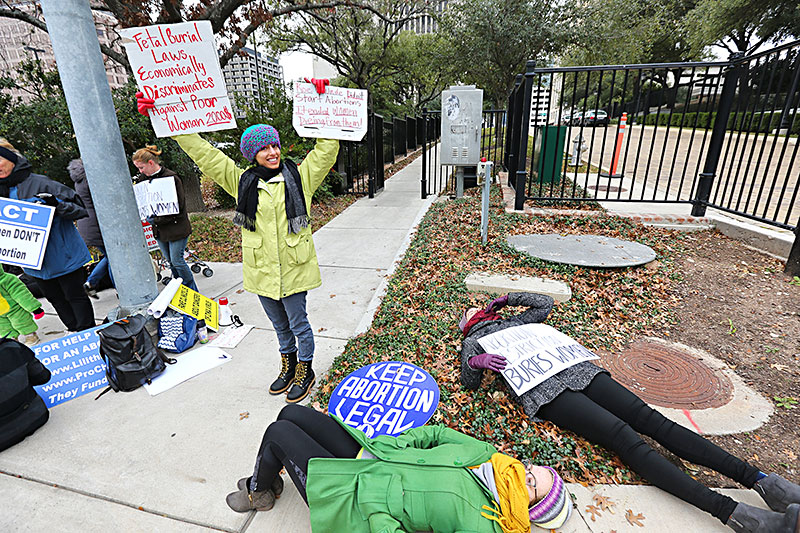 Protesters gathered outside the Capitol for a "die in" in early January. (Photo by Jana Birchum)

U.S. Federal District Judge Sam Sparks took sharp aim at the state of Texas' flimsy defense of a rule that forces women to bury or cremate their fetal tissue after an abortion or miscarriage. In a 24-page order issued Friday, Jan. 27, that – again – halted the anti-choice rule, Sparks (appointed to the bench in 1991 by former President George H.W. Bush) hit back at the state health department for proposing a regulation that may amount to a "pretext for restricting abortion access."

In his scathing order Sparks called the rule "unconstitutionally vague" because it would allow "arbitrary and potentially discriminatory enforcement." The judge also criticized the state's timing of the rule, published just four days after losing to abortion providers at the U.S. Supreme Court. "Facing the threat of an unfavorable decision from the Supreme Court in Whole Woman's Health, the Texas Depart­ment of State Health Services (DSHS) began plans for the next battle. Before the ink on the Supreme Court's opinion in Whole Woman's Health was dry, DSHS had already drafted the amendments," wrote Sparks.

By the department's own admission, the regulation serves no public health benefit; instead its singular purpose is to "respect life and protect the dignity of the unborn," – a "weak purported benefit," Sparks wrote. With no legitimate state interest, there is evidence DSHS's stated interest is actually a "pretext for its true purpose, restricting abortions." Furthermore, Sparks – hitting the nail on the head – called state officials out for attempting to define the start of human life as conception, which undermines liberty guaranteed in the Fourteenth Amendment.

Even if DSHS did have a legitimate interest, burdens on abortion access "substantially outweigh the benefits," Sparks wrote. DSHS provides only "simple, back-of-the-envelope math, which is unsupported by any research and relies heavily on assumptions," wrote Sparks in response to the department's claims that the rule would only impose minimal costs on abortion providers. The fact that abortion providers could only point to one vendor in all of Texas that would perform the services required by the rule gave Sparks reason to believe the regulation would "deliver a major, if not fatal, blow to healthcare providers performing abortions," and likely pose an undue burden on women seeking abortion.

In a statement following the order, Amy Hagstrom Miller, a plaintiff with Whole Woman's Health, said, "Judge Sparks saw past the state's claims and ruled on the right side of history. This ruling allows Texans to have the dignity to continue to make their own private health care decisions. ... We will not back down and are thrilled that we were victorious for Texans."

Sparks plans to set a trial date to issue a final ruling, but Attorney General Ken Pax­ton, an eager participant in the state's anti-choice crusade, has plans to appeal the temporary injunction directly to the conservative U.S. 5th Circuit Court of Appeals. 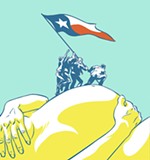