Lege Lines: Islamophobia Is out of Hand

In Texas and the nation, anti-refugee and anti-Muslim fervor grows 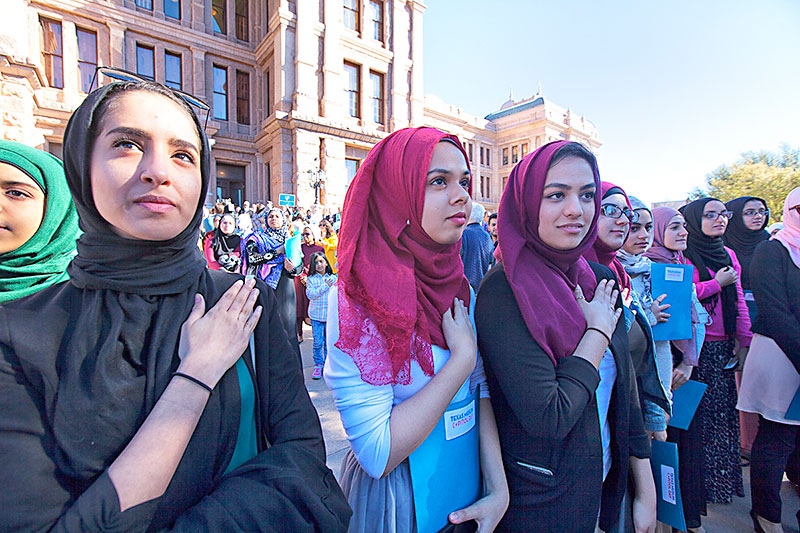 Girls from the Renaissance School recite the Pledge of Allegiance before Muslim Day on Tuesday. (Photo by Jana Birchum)

"We stand alongside you in the fight for justice and equality and against cowardly Islamophobic and frankly un-American leadership," said Casar. He led gathered allies in proclamation: "No ban! No wall!"

With the exception of a few mild opponents, the state's Council on American-Islamic Relations' Muslim Advocacy and Lobby Day could come at no better time. Islamophobia has officially swept over national politics. The Texas Legislature has seen its share of anti-Muslim hysteria this past week. Ahead of the annual event, freshman state Rep. Kyle Biedermann, R-Fred­ericks­burg, sent out more than 400 "surveys" to Muslim student associations and mosque leaders across Texas, polling them for their support of "radical Islamic extremism." (Because no better way to identify terrorists than to politely ask them to identify themselves via the U.S. Postal Service.) The three-question loyalty oath asked Muslim residents if they support referring to the Muslim Brotherhood as a foreign terrorist organization; advocate for a "Muslim Reform Move­ment"; and pledge to honor the safety of former Muslims. While the survey was paid for by private funds, it could easily be mistaken as a government-sponsored document, igniting confusion and offense in Muslim leaders statewide.

With all the anti-refugee and anti-Muslim fervor, it’s an important hour to remember the facts what kind of threat immigrants actual pose.

Adding fuel to the fire, last Thursday, Jan. 26, Bieder­mann convened a "Homeland Security Summit" forum to better understand the supposed "critical threat of radical Islamic terrorism in Texas." The hearing, stacked with anti-Muslim figures, was rife with fearmongering and little evidence of actual immediate danger. The forum capped off with a profane rant from none other than former Texas Rep. Molly White, who during the advocacy day two years ago required Muslims visiting her office to "announce allegiance to America." When asked by a local reporter if Biedermann would also hold a forum on radical Christianity or radical Judaism, White shot back: "How dare you say that, you low-life son of a bitch!"

The same day, Muslim leaders, joined by legislators including Donna Howard, Gina Hinojosa, and Celia Israel (all from Austin), held a Capitol press conference to denounce Biedermann's survey, charged as being timed strategically close to the religious group's Capitol advocacy day. "Muslims feel this neo-Nazi type of letter is reminiscent of McCarthyism," said Sarwat Husain of CAIR. "It's very misleading, humiliating, intimidating, disgusting, and downright offensive." In a statement, Rebecca Robert­son, ACLU of Texas legal and policy director, echoed the sentiment: "We don't have to look any further than the grim history of the McCarthy era to appreciate the danger loyalty oaths pose to our Constitution."

With all the anti-refugee and anti-Muslim fervor at the Capitol and at the national level, it's an important hour to remember the facts about what kind of threat immigrants actually pose. The chance of an American citizen getting murdered in a terrorist attack caused by a refugee is 1 in 3.64 billion per year, according to a 2016 analysis from the Cato Insti­tute, a Libertarian think tank. The chance of being murdered in an attack by an undocumented immigrant is 1 in 10.9 billion per year. As for involvement by Muslims – since the 9/11 attacks through 2013, Muslim-linked terrorism killed 37 Americans in the same time period that 190,000 Americans were murdered, according to a 2014 study from the University of North Carolina. As a recent Vox article noted, you are more likely to be killed by your own clothes melting or igniting than by an immigrant terrorist. (A newfound dystopia reliant on "alternative facts" makes pressing these figures an uphill battle.)

“How dare you say that, you low-life son of a bitch!” – Molly White

What does seem to be a growing threat are attacks on Muslim communities. In 2016, the FBI reported a 67% one-year surge in hate crimes against Muslims, the largest percentage jump among any group. Since Trump's election, anti-immigrant (first) and anti-Muslim (third) bias are the leading factors motivating hate crimes, according to the Southern Poverty Law Center. CAIR reports 2016 was the "worst year on record" for incidents in which mosques were targets of bias. While the cause is still under investigation in both cases, the recent fires that burned down Islamic centers in Victoria and right here in Lake Travis appear suspicious and should give us pause.

Undoubtedly, Biedermann and legislators who are considering other anti-Sharia law bills will only stoke growing Islamo­phob­ia. Some lawmakers, such as Rep. Rafael Anchia, D-Dallas, who filed a resolution condemning Trump's travel ban on Monday, will stand up to that bigotry. But at the Lege and in our nation's capital, it's the responsibility of all lawmakers – regardless of political party – to represent true American values and call for unity. It will be up to the thousands of citizen protesters to ensure that happens.

There was an unexpected moment at the close of the Muslim Capitol Day, when CAIR representative Alia Salem thanked President Trump and Biedermann. They are the ones who inspired the unprecedented crowd to show up, said Salem. "I am grateful to see that hate can turn into absolute love."

A version of this article appeared in print on February 3, 2017 with the headline: Frankly Un-American